Sound the Trumpet for Simon Hartman and His Whiskey! 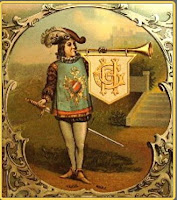 Ta-ta-tara, ta-ta-tara!   A trumpet blares at left to announce this post, one that features an immigrant boy from Germany,  his peripatetic early life selling cigars, his liquor endeavors in Chicago, his sudden departure for the West, his eventual return to Chicago, his success in producing and merchandising his whiskey across America.  Simon Hartman was his name.

One source says Simon was born in Wurtemburg, Germany, another says Bavaria, in May 1850, the son of Jacob and Caroline (Rosenour) Hartman.  He seems to have been a restless youth from the start.  Educated in the good German school system, he emigrated to the U.S. while still in his mid teens, settling in Omaha, Nebraska.   There he found work as a clerk in a clothing store, a job that he obviously found dull and boring.  Then opportunity beckoned.

To many young men — even as young as Hartman was at 16 — the idea of being a traveling cigar salesman seemed a romantic alternative to the humdrum.  One writer on the cigar trade has observed about the attraction:  “They dressed well, and traveled to distant places.  They were on the move finding adventure…Best of all, salesmen were popular, the center of attention wherever they went….”   Continuing, the writer noted that the reality for traveling cigar salesmen often was quite different.  Selling was hard work, traveling conditions were arduous, competition was fierce, and too often they met rejection:  “Salesmen came and went.  Some lasting barely long enough to get their business cards printed.” 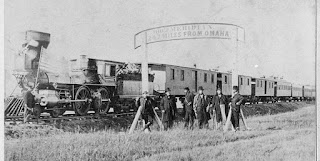 Not Simon Hartman.  He persisted three years as a cigar salesman in the West.  His strategy was a simple but ingenious one:   He followed the building of the Union Pacific Railroad as it wended its way west.  Shown here is a train that had arrived at the Nebraska town of Cozad, 247 miles west of the the starting point in Omaha.  Hartman might well have been on it.  As the rails were extended across America a whole succession of end-of-tracks towns came to life where cigars could be sold.  A train car would serve Hartman as both hotel and office as he accompanied the progress of the railroad across Nebraska, Colorado, Wyoming, Nevada and perhaps even into California, bringing him to places like Grand Island, Cheyenne, Laramie, Salt Lake, Reno and Sacramento.
How far Hartman followed the transcontinental rails is uncertain but he likely emerged from the experience in 1869 with a fair amount of cash.  Then he headed east to Chicago where a relative, Emanuel Hartman, with brothers Elias and Samuel, had begun a wholesale liquor firm located initially at 107 W. Harrison Street.  Its flagship brand was “Ages — All Rye.”

There Simon learned the liquor trade and accumulated sufficient wealth to think of marriage.  In May 1872, at the age 22 he headed west to Leavenworth, Kansas. There he married Emma Abeles.  She was 19 and
like Simon, an immigrant from Germany.  How they had met is unclear but their union would produce five children, Emanuel, Edward, Louis, Pearl, and Charlyne.

Two years later Simon’s wanderlust reasserted itself.  Uprooting his family from Chicago he headed west again, this time to Colorado.  Why he had departed is not explained.   Perhaps the Colorado silver boom caught his attention.  Or not being Emanuel’s immediate relative he may have seen no future for himself in the company.  In any case the 1880 census found him in Lake City, Hinsdale County, Colorado.  At age 30 he had returned to his original occupation in the clothing business.  Hartman soon became active there, joining the local “Pitkin Guards,” a Colorado National Guard unit that also was involved in abundant social events.  It took Simon only two years to determine that selling booze rather than britches was a more appealing prospect. In 1882 he and his family moved back to Chicago and he reentered the liquor trade.

This time Hartman associated himself with Dallemand & Company.  Albert Dallemand had been born in California and initially engaged in wholesale liquor there.  In 1885, however, he had decided that Chicago provided more opportunity and subsequently opened a business on Jackson Street.  [See my post on Dallemand, September 2012].   Hartman joined him there in 1886 as a minor partner and helped oversee that firm’s rise to prominence.   Dallemand was a marketing genius and Hartman learned enough from him over the ensuing eight years to strike out on his own.

Thus in 1894 was born the Goodhart-Hartman Co., located at 229 Kinzie Street in Chicago  Simon was the president and P. H. Goodhart was secretary-treasurer.  They called themselves “distillers and importers.”   In truth they more likely were rectifiers, blending and mixing whiskeys to achieve certain taste and color.  Their brands were "Belle Mead,” “Belmead,” “Clear Brook,” "Fairview Spring,” "Ivy Leaf,”  "Victoria Club,” and the flagship label, “Herald.”  In 1906 the firm trademarked that name, along with Clear Brook and Victoria Club.   A chromolithographed saloon sign advertising Herald Whiskey displayed four illustrations showing the extensive interior of the Goodhart-Hartman facility.  The scenes begin with the bottling department at the upper left, and progressing clockwise depict the blending room, the business office, and finally, barrels of Herald Whiskey maturing in racks. 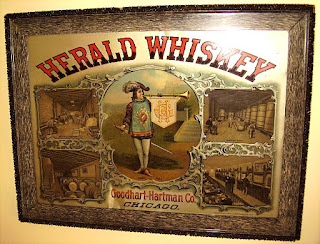 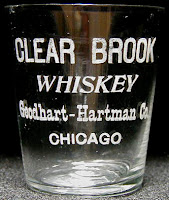 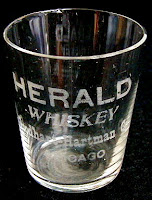 Hartman had learned well from Dallemand about the need for a wholesale liquor dealer to provide attractive giveaway advertising items to customers like saloonkeepers, restaurant owners and bartenders.   Prime gifts were saloon signs, as the one shown above, and the one below that is a reverse glass example, attractive but expensive to make.  Lesser but common items were shot glasses.   Shown here are three shots, advertising Herald, Clear Brook and Belmead Whiskeys.   Another item was a paperweight containing bar dice.  It bore the address of 116-118 Franklin Street, where Goodhart-Hartman moved about 1900.  The company would make two more moves, to 20 North Franklin in 1911 and 225-227 West Randolph in 1913. 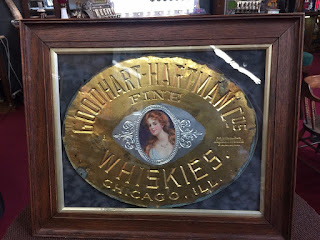 Hartman’s marketing efforts extended far beyond the confines of Chicago and Illinois.  Shown here is a “ghost sign” from the front of a building in Fort Smith, Arkansas.  Over the door of an establishment identified as a “cafe,” it carries the admonishment “Always Get the Best, Herald Rye.”  It also was the featured liquor at the fancy Hotel Minnesota, located on the shores of Detroit Lake in Minnesota. In 1901 the capitalization of Goodhart-Hartman was increased by stockholder vote from $100,000 to $300,000, the equivalent of $7.5 million today. 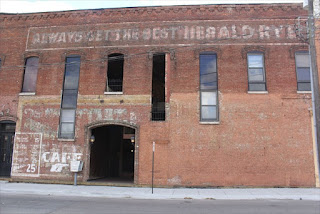 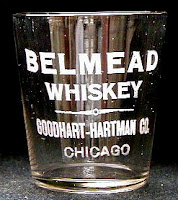 Moreover, Simon was extending his financial interests.  In 1904 he was one of three Chicago businessmen who organized a “manufacturing confectionery business” called The Western Candy Company.  He also was an investor and director of the United States Coffee Company.  The census taker found him at home in 1910 at 4558 Ellis Avenue in Chicago’s Sixth Ward.  Now 59, his occupation was given as “wholesale merchant - liquors.”  Residing with him and wife, Emma, was his son, Edward, working as a Goodhart-Hartman traveling salesman.

Sadly,  Hartman had only two more years to live.  On December 6, 1912, he died in Chicago at the age of 61.  He was buried at Rosehill Cemetery and Mausoleum in Chicago.  Emma would join him there 18 years later.  About the time of his death the Goodhart-Hartman Company disappeared from Chicago business directories.   Without the founder’s guiding hand the business appears to have faltered and terminated.

Left to posterity are the attractive artifacts Simon Hartman left behind and the story of a young immigrant who rode a train car West selling cigars and setting the tone for a career that culminated in giving America a much “Herald-ed” whiskey.