As commander in chief during the American Revolution,  George Washington ordered that there should always be “a sufficient quantity of spirits with the army, to furnish moderate supplies to the troop.”  E. L. Anderson, a liquor dealer of Newport, Kentucky, decades later made it his business to insure that the general’s wishes were carried out.

More than any whiskey man I have profiled, Anderson made the U.S. military an object of his marketing.  It could be a rich field for merchandising.  Both before the Civil War and after, consumption of alcohol by officers and troops was substantial.  Plagued with drunkeness in the ranks, the Army did as the British had done earlier and in the 1880’s created the “post canteen” where a service man could drink under supervision.  By 1897, admissions to sick call for drunkeness had been cut in half among the troops.

Nonetheless, military instillations required considerable supplies  — something Anderson recognized ahead of his competition.  He advertised heavily in the “Journal of the U.S. Cavalry Association,” the cover shown above; the “Journal of the Military Service Institution of the United States;”  the “Army-Navy Register and Defense Times,” and other publications aimed at the military.  Anderson’s ads asserted: ”We have a large patronage among officers of the Army and Navy.”  And: “We have been well and favorably known to among the officers of the Army and Navy for years.”

Bases and camps provided a boon to Anderson.  U.S. military reservations were exempt under federal law from state, county, and locally enacted alcoholic beverage laws.  For decades these installations frequently were “wet” zones inside “dry” districts.  The publishers of an armored vehicles journal noted:  “The E.L. Anderson Distilling Co. of Newport, is among the manufacturers in its line that stands as the very top of whiskey producers who do a mail order business.  A good share of it finds its way into the army.” 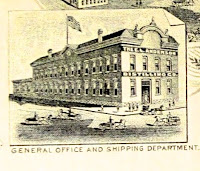 Anderson’s liquor business first was recorded in business directories in 1895 as the E. L. Anderson Distilling Company.  The Newport company letterhead, shown above claimed that the firm was “distillers of fine Kentucky Whiskies,  The letterhead also displayed Anderson’s general office and shipping department at Sixth and Overton Streets.  After locating at two other addresses on Sixth Street, it had moved to Overton in 1899.

The letterhead added “we don’t belong to the whiskey trust.”  Probably for good reason.  The Trust bought up distilleries, not mail order houses, wholesalers and rectifiers, that is, outfits that blended and mixed whiskey for sale under their own labels.  In a 1905 legal case, the company is referred to as “organized for the purpose of blending and sale of fine whiskies.”  That would make E. L. Anderson a rectifier, not a distiller. 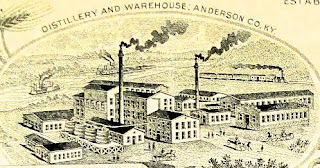 Nonetheless, the company displayed a distillery on its letterhead, as shown above.  Anderson claimed it was located in Anderson County, Kentucky,  about 110 miles south of Newport.  Many distilleries existed in Anderson County and the illustration is fairly generic.  It emphasized the plant’s proximity to both water and rail transport. 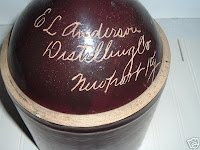 Mail order sales constituted most of E. L. Anderson’s trade.  His advertising emphasized that its rye or bourbon whiskey was going straight to the consumer in its self-designated “famous little brown jug.”  The jugs definitely were brown but as shown here, anything but little.  They held a full gallon of liquor and were heavy.   According to the ads, they sold from $2.90 to $5.25 per jug depending on the age of the contents and were delivered in a sealed box with no identifying markings — thus presumably thwarting any nosy neighbors.

Anderson featured a limited number of brands, including “E.L. Anderson’s Malt Rye,” and “Belle of Newport.”  The latter was a rye whiskey that was openly advertised as a blend.  It sold in quart and flask size glass bottles carrying attractive labels.  Under the labels was an embossing that spelled out “E. L. Anderson…Distilling…Newport Ky.” These containers do not seem to be as common as the jugs with their “scratch” labels.  As shown below he also provided glass shot glasses to favored customers.

Details about Anderson’s personal life are sketchy.  He is listed as having served as an executive board member of the Cincinnati Society of Natural History during the early 1890s.  He also played a leading role in trade associations and served as president of the National Association of Wine & Spirits Representatives, an organization of about 200 members originally formed to present a common front to the federal government on taxation issues, but increasingly drawn into the fight against prohibition.

A mail order business strategy required the company to advertise widely.  In addition to regular ads in military publications, E.L. Anderson advertised in national magazines of general circulation like “Harper’s Weekly” and the original “Life.”  He also favored medical publications such as “The Medical Standard,”  “The Medical Brief,” “Dietetic and Hygienic Gazette,” and “Homeopathic News.”  Those ads hyped the medicinal values of Anderson whiskey. 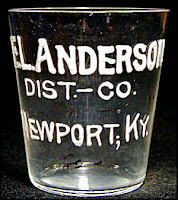 Almost certainly it was this heavy emphasis on advertising that drew the attention of the founder of the most famous advertising agency in America, J. Walter Thompson,   Although based in Manhattan hundreds of miles away from Newport, Thompson, a Civil War veteran, became  impressed by what he saw the liquor man doing.  He once said:  “An spot on earth where goods are to be sold by advertising is inside the fence of the Thompson field.”  Acting on his words, he emerged as the major stockholder in the E.L. Anderson Distilling Company.

It is entirely possible that Thompson, the advertising genius shown right, was responsible for designing some of the ads for Anderson’s whiskey.  In 1905, however, the association led to a legal dispute that was fought in the U.S. District Court, and on appeal to the U.S. Circuit Court.  Thompson sought an injunction to prevent Anderson and other members of his board of directors from exchanging stock worth an equivalent today of $750,000 to purchase a house and lot from the Wadsworth Watch Case Co. and move the offices of the distilling company there.  Thompson’s request was turned down at the district court level and again denied on appeal.

Despite that favorable outcome, the life span of the E. L. Anderson company was limited.  The firm seems to have terminated shortly after 1905, likely an effect of the so-called “Canteen Act of 1901” passed by Congress that forbade "the sale of, or dealing in, beer, wine or any intoxicating liquors by any person in any post exchange or canteen or army transport or upon any premises used for military purposes by the United States."  Anderson’s whiskey no longer had easy access into the U.S. Army.  Before long his company was out of business.   During its lifetime, however, Anderson had proved that targeting a specific segment of the population, like the U.S. military, could be an effective and profitable strategy for the whiskey trade.

Posted by Jack Sullivan at 8:25 AM