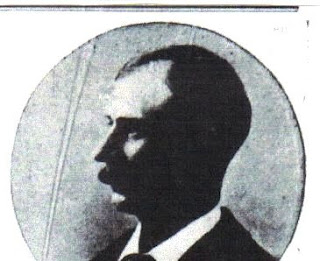 John Patrick Ryan, best known as Jack Ryan, was widely believed to be a confidant — and perhaps a co-conspirator — to the last of the famous outlaw bands of the West, the so-called “The Wild Bunch,” a gang that included Butch Cassidy and the Sundance Kid.  Suspected by railroad police of being complicit in two major Wyoming robberies of Union Pacific trains, Ryan ironically years later was killed while visiting a tunnel being constructed for that railroad line.

Shown right,  Ryan was born in 1862 in Leavenworth, Kansas, of Irish immigrant parents.  He had at least two siblings, brothers Mike and Tom, who would play a role in his later life.  Upon reaching maturity Jack Ryan showed a propensity to go where the Wild West was still wild. He reportedly first headed for the panhandle of Texas, working in the cattle business.  In the late 1880s he was recorded living in Dodge City, Kansas, long identified as one of the rowdiest of frontier towns. 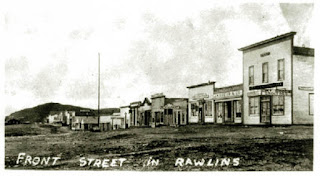 In 1887 the Laramie Daily Boomerang reported that John Ryan had come to Wyoming and was staying at the Thornburgh Hotel, the finest hostelry in town.  Ryan must have liked the locale because the same year he hired out as a trainman for the Union Pacific Railroad at Cheyenne.  Meanwhile his brother Mike, with a partner, had bought out a grocery store and its stock, much of it likely whiskey, in Rawlins, Wyoming.  In 1890, Jack Ryan transferred to Rawlins, shown above, as a brakeman and substitute freight conductor working between there and Green River, Wyoming. 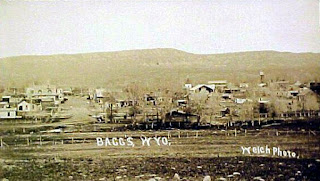 After some eight years working on the railroad, Ryan apparently tired of a trainman’s life and resigned.  By this time he was 28 and likely married.  His wife’s name and origins are shrouded in history;  she is known chiefly as “Mrs. Jack Ryan.”  The marriage produced at least one daughter.  In July 1895, with a partner, James Kite, Ryan opened a saloon in Baggs, Wyoming.  Shown above, this town was a frontier settlement 57 miles south of Rawlins as the crow flies, located close to the Colorado border.  The third saloon opened in Baggs, the partners’ first location was in a tent.  Nevertheless, the Carbon County Journal reported in October of 1895 that “Kite & Ryan, former Rawlins boys, are engaged in the liquor business at Baggs and are doing a rushing business.”

By November the same newspaper reported that  Ryan and Kite had moved into their new frame saloon building in Baggs.  Shortly after, Kite sold out his interests to Doc Garner.  The following year Garner sold out to Mid (aka Mit) Nichols.  The new partners called their establishment the Home Ranch Saloon. In 1897 they advertised in the local newspaper:  “Take something. Then go to Nicols & Ryan’s ‘Home Ranch Saloon.’  All kinds of liquors, keg beer always on  tap.”

The success of Ryan’s watering hole also had its down side.  In October 1897, the Rawlins newspaper reported that a petition was in circulation in Baggs asking that the saloon license of Nichols and Ryan be revoked for keeping a disorderly house.  The town was notorious for being a haven for outlaws, including the notorious Butch Cassidy and the loosely organized gang he headed known as the “Wild Bunch.”

After a stick-up in Utah in which Cassidy and his boys robbed the Castle Gate-Pleasant Valley Coal Company payroll of more than $8,000 in gold coins and currency,  the outlaws ultimately reassembled at Baggs after celebrating by shooting up the nearby town of Dixon, the kind of antics had earned gang its name.  Most of Baggs was deserted in anticipation of the Wild Bunch arrival, but Jack Ryan stayed open and the gang obliged by getting drunk and shooting up his saloon. 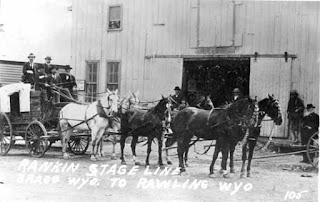 As the story goes, Ryan stayed calm through the chaos and as a result he was rewarded by the outlaws with a silver dollar for every bullet hole found in his saloon, reported to be twenty-five.  Moreover, he was able to earn the confidence of Cassidy and the others as a reliable collaborator.  Apparently tired of life in an isolated hamlet,  Ryan took the outlaw money and likely riding the stagecoach from Baggs to Rawlins, shown here, he bought a saloon in Rawlins and relocated there.  He played host in Rawlins to Cassidy and other members of the Wild Bunch.

Below is a photo from about 1888 or 1889, showing the gang and Ryan posed in front of the Ryan’s place, probably one known as the Bouquet Saloon.  That is Cassidy in the bowler hat, standing fourth from the left.  Jack Ryan is standing behind him, also wearing a bowler.  Jack’s brother, Tom, is identified as the man behind him to the left.  Mischief would follow. 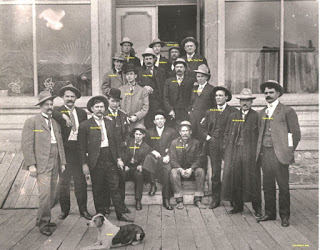 As one historian tells it:  “Near dawn on June 2, 1899, an engineer from the westbound Union Pacific Overland Flyer No. 1 fired off a telegram from Medicine Bow, Wyoming: ‘First Section No. 1 held up a mile west of Wilcox.  Express car blown open, mail car damaged.  Safe blown open; contents gone.’”   The robbers got away with $30,000 (equivalent to $750,000 today).  As the photo shown below indicates, the mail car was not just damaged but destroyed by the blast.  The Wilcox holdup would become one of the West’s most famous train robberies. 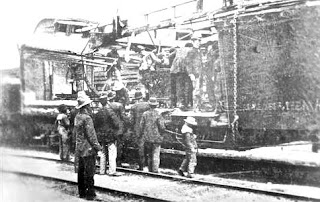 This hold-up was followed slightly more than a year later when a gang robbed the Union Pacific No. 3  train near Tipton, Wyoming, of $50,000 in gold.  Suspicion fell on Jack Ryan.  Known to be a confidant of Cassidy and other gang members and as a former trainman on the Union Pacific, Ryan presumably had inside knowledge of operations.  This time a posse, below, was early on the track of the robbers and the Union Pacific engaged the Pinkerton Detective Agency. 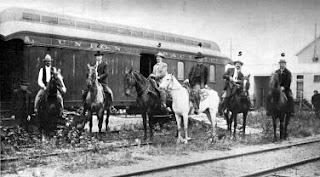 Ryan, code named “Basket,” was fingered by Pinkerton operatives as an accomplice and they opened a criminal history dossier on him.  That record gave a physical description of the saloonkeeper:   At age 40, Ryan was five feet, eight and a half inches tall, and weighed between 150 to 160 pounds.   He had a light complexion, brown hair, a sandy mustache and spoke with a “heavy” voice. There was something wrong with his eyes and he was known by some as “cockeyed.”

Specifically, Ryan was suspected of knowing when gold shipments via Union Pacific were likely and tipping off  the outlaws.  It seemed suspicious when on the same day as the Wilcox robbery, he sold his Bouquet Saloon in Rawlins and promptly invested in another in the newly constructed Cheatum Building, taking a new partner, Joseph Buckley.   After the Tipton robbery, Ryan was rumored to have helped a gang leader bury some of the loot at a ranch owned by a friend twenty miles south of Rawlins.  Later, Charles Siringo, the lead detective for Pinkerton, joined a wild horse hunt with Ryan.  Siringo in his book, “Cowboy Detective,” claimed that during this hunt he discovered that Ryan had kept a hired man and a cache of food in a nearby mountain hideout to feed the Wild Bunch as they passed through. 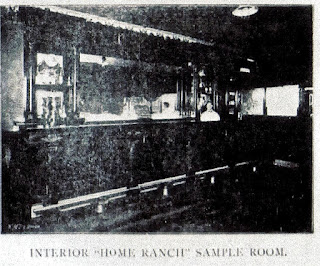 Regardless of suspicions, Ryan stayed out of jail and continued to prosper.  With his partner, he was running the Home Ranch Saloon in Rawlins.  He and Buckley expanded their operations, opening a second drinking spot in Rawlins called the Club Saloon and in 1900 buying a saloon in a settlement not far from Rawlins, installing Tom Ryan as the manager.  Jack Ryan also owned a saloon back in Baggs for a time.  In 1906 Buckley left the liquor business, selling his remaining interest to the Ryan brothers. 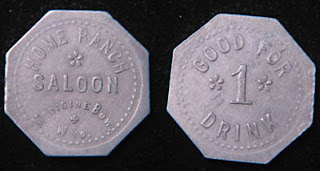 Ryan is most closely associated with the Home Ranch Saloon.  Although the interior photograph shown here is poor, it shows an elaborate bar with brass foot rails, indicating an attempt at elegance. Trade tokens, similar to ones shown here, have been attributed to the Home Ranch in Rawlins.  The saloon closed about 1912.

At some point in his career as a saloonkeeper in Rawlins, Ryan issued a pint-size whiskey flask that has his name and "Rawlins Wyo" embossed in the glass. It is a screw top "dandy" style.  The Ryan flask is among the rarest of Western bottles.  According to Warren Borton, author of "Historical Bottles of Wyoming," there may be as few as four extant. It is shown below: 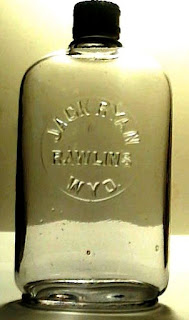 With his increasing wealth Jack Ryan was expanding his business interests.  He was described in the local press as having large real estate holdings at a settlement near Rawlins called Walcott, including owning the townsite, valuable oil lands and “one of the best stone quarries in the country.”  He maintained a horse ranch on the Platte River, ten miles north of Walcott. In his latter years he also was engaged in mining projects, particularly seeking gold in Colorado.   Ryan also was active in civic affairs and a co-founder of the local lodge of the Fraternal Order of Elks.  Of him a local newspaper editorialized:  “A man with diversified interests is J. P. Ryan and since his advent in Rawlins no effort has been spared by him for the advancement of the town’s best interests.”

It is unclear why Ryan on a fateful day in May, 1924, was in a tunnel being dug by the Union Pacific Railroad through a mountain near Rawlins.  At the age of 62 it is unlikely he was working for the railroad.  Perhaps it was curiosity that brought him there.  The Rawlins Republican told the story:  “Work upon the afternoon shift had just begun, and it was thought everyone was beyond the reach of danger.  A charge of dynamite was set off, hurtling into the air a fragment of stone which fell on Mr. Ryan’s head, causing immediate unconsciousness and death within a quarter hour.” 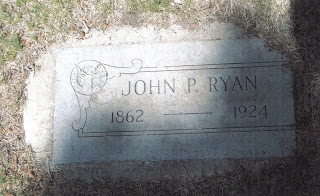 Ryan was buried in the Rawlins Cemetery with full honors from his Elks Lodge brothers.  Among those at his gravesite were his brothers, Tom and Mike, and his married daughter, with whom he had been living since the death of his wife in 1920.  His headstone is shown here. The saloonkeeper went to his grave without revealing what, if any, involvement he had in the Wilcox and Tipton railroad heists.  By the time of his death the Union Pacific Railroad with its Pinkerton detectives had tracked down most of the robbers.  The Wild Bunch was history, its members, including Butch Cassidy, shot down or in prison.

Note:  When I first posted this vignette on Jack Ryan, I lacked a picture of the rare Jack Ryan flask and asked for help from readers.  Just recently, as can be seen above, Warren Borton of Midvale, Utah, came to the rescue with a photo.  In his communication with me he says that he dug bottles all over Wyoming for some 40 years and never found one.  He did, however, purchase one from a fellow digger some years ago.  Warren is working on an updated fourth edition of his bottle book.  It should be well worth the having.