The 1906 San Francisco earthquake, magnitude 7.8, struck the coast of Northern California on April 18.  Devastating fires broke out in the city that lasted for several days.  Among those burned out of their business quarters were Louis H. Barner and Henry Kehlenbeck, thriving wholesale liquor dealers.  Surviving a disaster in which 3,000 people died and 80 percent of the city was destroyed, the partners obviously were “shaken” by the experience but did not “stir” from their resolve to remain in downtown San Francisco.  Less than a year later they were back in business.

It is unclear how Barner & Kehlenbeck initially created their partnership.  Both men had been born in Germany,  Kehlenbeck about 1858 and Barner in 1867.  The older Kehlenbeck had immigrated into the United States in 1872, at the age of 14, Barner came in 1885, age 12.  This suggests that each might have arrived with other family members.  By the time of their collaboration Kehlenbeck was married with a family.  In 1889 he had wed a woman named Amelia, nee Pihlinbeck, who had been born in Missouri about 1869 of German immigrant parents.  At the time of the 1900 census the Kehlenbecks had two children, Lottie, 9, and Harry, 5.  The same year Barner was still a bachelor, lodging at a boarding house. 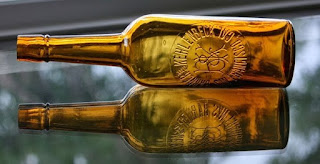 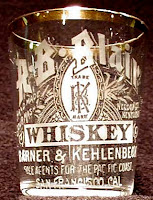 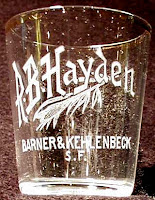 Their company first emerged in San Francisco directories in 1898 with an address on the southwest corner of Eighth and Mission.  With success and needing more space in 1900 the partners moved to 324 Clay Street.  Barner & Kehlenbeck were unusual as whiskey wholesalers for confining the number of brands under their label largely to two, “R.B. Hayden Whiskey” and “R.B. Blair Bourbon.”  Under the labels for each quart was an embossed glass cylinder with a large intertwined monogram of the owners names.  Company bottles, one shown here with a mirror image, were in shades of amber and blown in a mold either with a long tapered neck or, less often, with a inside thread closure. 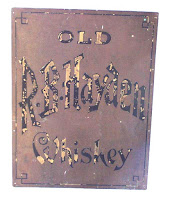 Barner & Kehlenbeck, keeping up with the competition from other local wholesalers, provided customers like saloons, bars, restaurants and hotels with giveaway items advertising their brands.  Show here are a reverse glass sign, somewhat degraded over time, featuring R. B. Hayden Whiskey.

Better preserved is a well-designed white enameled back-of-the-bar bottle for the same brand.  The partner issued one R. B. Hayden shot glass, its lettering similar to the enameled bottle and several variations of shot glasses for R. B. Blair Whiskey.  Two examples are shown above. 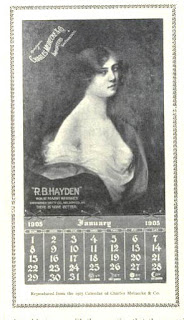 In 1905, just prior to the catastrophic year, a R. B. Hayden calendar featured the bust portrait of what was termed, “a Titian-haired beauty.”  The Pacific Wine and Spirit Review termed the image “high art in trade advertising.”

By 1906,  Barner & Kehlenbeck had made its two whiskey brands among the most widely known on the West Coast and the company was thriving. The earthquake, however, triggered a fire at the California Fireworks Company on Front Street, burning north to Clay Street and creeping up that thoroughfare slowly but steadily. 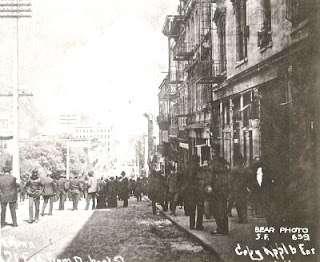 Shown right are a group of onlookers on Clay Street, including anxious shop owners that may have included Barner and Kehlenbeck, watching as the flames drew nearer.  Along Clay some buildings were blown up as a preventive measure but the progress of the fire was not halted.  Shown here is a picture of the street afterward, strewn with dead horses and ruins. 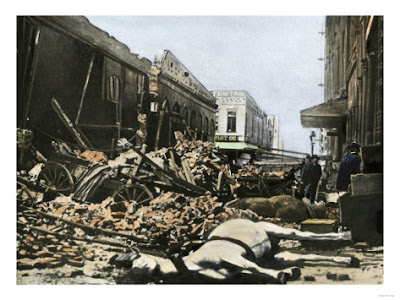 Burned out of their business, Barner & Kehlenbeck disappeared from directories and the telephone book for a time, displaced along with tens of thousand of other San Franciscans.  Fearing future quakes some residents simply moved away.  Not Louis Barner and Henry Kehlenbeck.  By early 1907, just a few weeks after the earthquake, they were back in business at Devisidaro Street, an area of town that had not been ravaged by fire.  By the end of that same year they had rebuilt permanent quarters at 714 Kearney Street and moved in to resume operations. 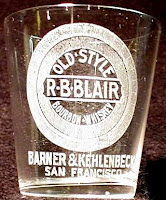 Barner appears to have died during this period.  Subsequent directories    indicated that the principals in the firm after 1907 were Kehlenbeck and  Mrs. A. Barner, the widow.  With a subsequent remarriage, Mrs. Barner became Mrs. Anderson, remaining an officer in the firm that bore the name of her late husband.  The business continued to thrive at the Kearney Street address until 1919 when the liquor dealership was shut down by the anticipation of National Prohibition. 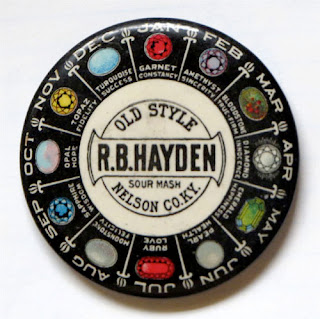 In 1909 San Francisco threw a three-day party called the Portola Festival to celebrate the rebuilding of the city a short time.  I can imagine that Kehlenbeck was among those participating.  San Francisco virtually had been made new — 20,000 buildings had been erected in three years time, among them the wholesale liquor house of Barner & Kehlenbeck.

As one observer has put it:  “Who would have imagined that just a new days after that people would step up and seek to rebuild…in the miraculous way that we see it here today?”  Lewis Barner and Henry Kehlenbeck must be hailed as among those who stepped up.  Like a James Bond martini, those whiskey men were shaken, not stirred. 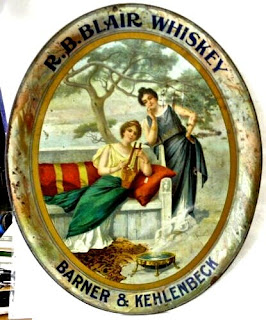 Posted by Jack Sullivan at 8:32 AM