“Billy” Pearson and Whiskey as Grandma Made It 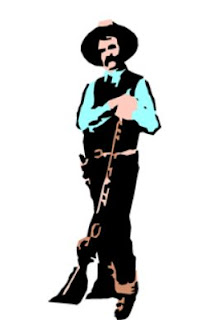 When William “Billy” Pearson left South Carolina as an outcast for Tennessee in 1812,  he took with him four of his children, a few personal items, and as his most valuable possession, a recipe for making whiskey inherited from his grandmother.   That recipe eventually would find its way to a man named Jack Daniel and the rest is history.   At left is an artist’s representation of what Pearson might have looked like. 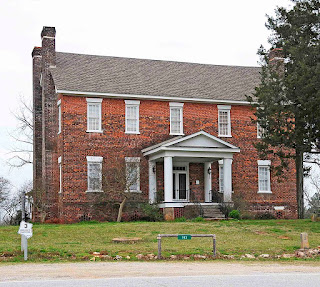 Pearson’s story reaches back before the Revolutionary War when he was born in April of 1761.  He was the son of Enoch (sometimes given as Enock) and Tabitha Jacocks Pearson in Bucks County, Pennsylvania. They were Quakers.  Here sources differ about how he got to South Carolina.   A biography by a descendant relates that when Billy was only four years old his family moved to a 1,000 acre plantation near Sedalia in Cross Keys Township.   This likely was Cross Keys Plantation, described as “large and prosperous.  The manor house is shown here.  Enoch Pearson likely was working as a surveyor for the plantation owner.

An alternate story reputedly has Billy Pearson growing up in Pennsylvania and at the time of the Revolutionary War joining the 1st Battalion, Philadelphia Troops Militia.  Only later, according to this account did he move with his family to South Carolina.  My own research tends to discount that history.  In any case, the stories come together in 1777 when at the age of sixteen Billy got married in South Carolina — apparently this was not an uncommon age for a young Quaker to wed.  His wife was Sarah Jones Jacks, already a widow at nineteen.  She had been married to Edmund Jacks, a revolutionary sympathizer who had been killed by British Loyalists.

Not long after their marriage, Pearson managed to get into his first scrape.  His descendant told the story:  “In late 1777 or early 1778, Billy had a mare stolen from him.  He managed to get hold of a gun (the Quakers or Society of Friends did not believe in force or fighting and were strictly "Pacifist") and went after the horse-thief threatening to use the gun if the occasion required.  On March 23rd, 1778 he was condemned in the meeting for his misconduct.”  As a result Billy was ejected from the Quaker Church. 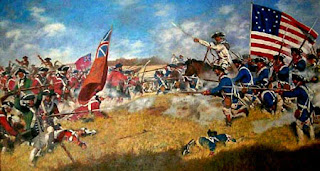 Although some accounts have accused Pearson of British sympathies, after the Battle of Kings Mountain, in which the Patriot Militia defeated South Carolina Loyalists, he is said to have become an ardent believer in the revolutionary cause and joined the 2nd South Carolina Spartan Militia Unit as a private.  Accounted faithful to the cause until the end of the war,  Pearson likely saw action at the Battle of Cowpens, shown here.  This was a decisive victory by the Continental Army over a British force and marked the reconquest of South Carolina by the Revolutionary Army.

Meanwhile Billy and Sarah were having children.  Beginning in 1778,  they subsequently produced four boys and four girls, including one daughter who died in infancy.   No longer welcome in the Quaker Church,  Pearson and his family joined the Baptist Church of Padgett’s Creek, South Carolina.  Shown here, the Church now is on the National Register of Historic Places. 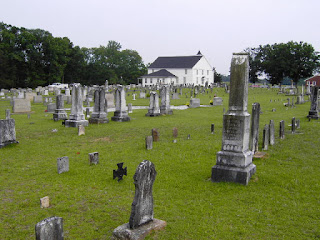 When Billy’s father died in 1780, he inherited 200 acres of farm land and five sheep. But his mother would bestow on him something that would prove to be even more valuable.  From her mother, a woman named Mary Stout Jacocks, Tabitha Pearson had received a formula for making whiskey that she passed along to Billy.  As his descendant tells it:  “Billy improved the formula and began making a very smooth sipping whiskey from a corn-mash, filtered through charcoal made from hard sugar-maple wood, and aged in oak barrels.”  He found ready customers for Grandma’s whiskey from a local clientele.

That success also got him in trouble a second time with a church.   The members of the Padgett’s Creek Baptist Church greatly frowned upon drinking any alcoholic beverage.  Making and selling it were even worse.  Pearson was hauled before the Baptist elders in August 1791.  They recorded:  “Met in Church Meeting and Laboured with William Pearson about the principle of falling from Grace [i.e. making whiskey] & he held his principle and refused to go with the Church in their standing, and Excommunicated for the same & his hard Spirit with the Church”   Having been thrown out of two local church congregations, Pearson with his alleged “hard spirit” continued to make and sell hard spirits.

With the death of Mother Tabitha and increasingly rocky relations with wife Sarah, about 1812 Pearson organized a wagon train and headed over the Appalachian Mountains to Tennessee, taking his four older children with him.  Sarah stayed behind with the four youngest and eventually divorced Billy.  He bought land and settled at Big Flat Creek in what became Bedford County, not far from Lynchburg.  A true pioneer, Pearson is credited with building the fourth log cabin in the area, located at the foot of Bobo Hill, named for another pioneer, Washington T. Bobo.  The first log cabin built there was by James Gowen, a Virginian with ties to Martha Washington; the second was by Davey Crockett and the third was the Territorial Courthouse in what was then still Indian Territory. 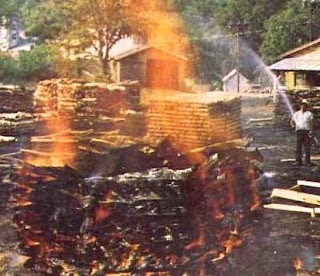 Sources are quiet about Pearson’s subsequent activities, but the assumption must be that he farmed his land and continued to make whiskey via Grandma Jacock’s recipe and that once again it proved popular to a local client base.  The key to the formula was what has come to be known as “maple leaching.”  The whiskey was distilled from corn mash and then filtered through charcoal made from hard sugar-maple wood. The charcoal is shown above beings made. The whiskey then was aged in oak barrels.  The charcoal leaching removed impurities, added color and some flavor, as did the oak barrels.  Grandma Jacocks was not the only one to discover this method.  Whiskey scholars say it also had been used early in Kentucky but had never caught on. 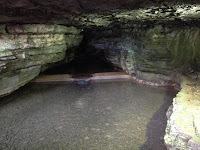 About 1925, at 63 years old, Pearson sold his whiskey formula to a local distiller named Alfred Eaton.   Eaton with a partner had been operating a still near Lynchburg at Cave Spring, shown here, and immediately began using the leaching process, filtering his whiskey through sugar maple charcoal.   When Jack Daniels in 1865 moved his still house to Cave Spring Hollow, he shared the spring water with Eaton.  The flow that came from the cave was sterile, had no iron content, and was a consistent 56 degrees — perfect for making good whiskey.  Daniels eventually also bought Grandma Jacock’s recipe from Eaton — and never looked back. 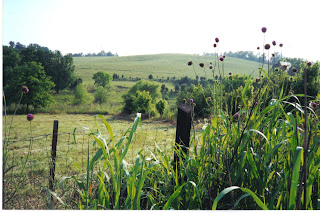 Meanwhile William “Billy” Pearson had died in October of 1844 at the age of 83.  He was buried in what was called a “rock box” in a wire-and-wooden fenced area, shown here, at the foot of Bobo Hill, at the intersection of two local roads north of Lynchburg.  Pearson’s broken gravestone is shown below.  A son and other family members also have been buried at what is known today as Old Pearson Cemetery. 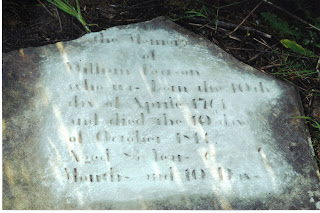 Over the years several claims have been made about teaching Jack Daniel how to make whiskey.  [See my post on Hop Lee, April 2014.]  Some validation of the Pearson family claim about grandma’s recipe can be found in a letter on Jack Daniels letterhead to a Pearson descendant, dated September 26, 2003.  The letter was written by Joe Rossman, director of the Daniel’s Visitor Center in Lynchburg.  In it Rossman says:  “If your Billy Pearson did indeed sell his grandmother’s recipe for making whiskey to Alfred Eaton, then the Lincoln County Process” using sugar maple charcoal, which in the hollow is now called our “charcoal mellowing process,” has an even more fascinating history than some of us have imagine.  And Mrs. Mary Stout (Jacocks) of Bucks County, PA, deserves to be warmly remembered for her early distilling skills back in the mid-1700s.”

The Jack Daniels letterhead, shown here, features the motto:  “Whiskey made as our fathers made it.”  Perhaps it should be amended to say:  “Whiskey as Billy’ Pearson’s grandma made it.”

Note:  Elton Pearson of Toluca, Illinois, was the man to whom the Daniels Company letter was sent.  Pearson in 1926 wrote the material quoted directly in several instances in this post.  He was a descendant of Billy Pearson, an ancestor whom Elton called “A colorful character.”  The drawing of Billy that opens this post is from a website that contains Pearson’s biography of that pioneer whiskey man.