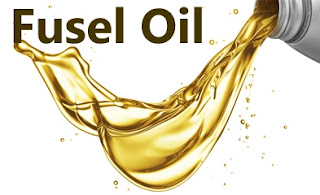 What is “fusel oil”?  In their advertising Philadelphia liquor dealers and whiskey “rectifiers” Benjamn Holl and his son repeatedly charged fusel oil with being “poisonous” and backed up that claim by numerous testimonials declaring that their “Riverside Purified Whiskey” was free of the stuff.  A closer look at fusel oil indicates a somewhat different story.  So who was Benjamin Holl and why was he saying those things?

Born in Pennsylvania in 1830, Holl tried a number of mercantile occupations in his mature years, apparently with notable financial success.  He appeared in the 1870 U.S. census living in the District 44, Ward 15, of Philadelphia, his occupation given as “tobacconist.” By now 40 years old, he was living with his wife and five children, ages four to sixteen.  The family could afford two live-in servants and Holl reported to the census taker a net worth that in today’s dollar  would be just short of $1 million. By 1877, according to Philadelphia directories, Holl had added his eldest son, J. Edgar Holl, to the tobacco business, and the firm, at 116 North Third Street became known as B. F. Holl & Son.  Some records indicate that the Holls were already selling liquor from this establishment.  By 1883 they had moved to 410 Arch Street and no longer were listed as tobacconists but solely as liquor dealers.  The Holls featured two proprietary brands, likely mixing them up in a back room.  They were “Sandy Run Rye” and “Riverside Purified Whiskey,” a label they trademarked in 1879.  They issued a elaborate trade card for Riverside, the first of several shown throughout this post. 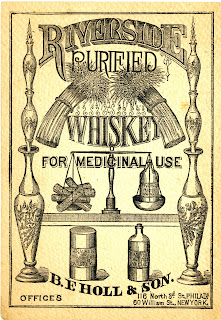 Apparently attempting to carve a niche for Riverside Whiskey, the trade card took aim squarely at fusel oil as a poisonous substance that could be found in the whiskey of competitors. On the back of the card eight testimonials testified to the medicinal qualities of Riverside Whiskey and focused on the fusel oil “threat.”

Said L. M. Davis, Analytical Chemist and State Liquor Inspector of Canton, Ohio:  “On careful analysis of a sample of whiskey of the brand, ‘Riverside,’ I find to be…strictly free of fusel oil, or any added deleterious substance.”  Dr. H. Patterson, identified as a Philadelphia M.D., attested to its purity “free from the heavy fusel oil paramount in most other whiskeys.”  T.C. Lontelac, identified as analytical chemist from New York, stated:  “I have made a chemical analysis of samples of Riverside Whiskey sent me, which proves to be free from the heavy fusel oil met with continually in the general distillation of Whiskey” 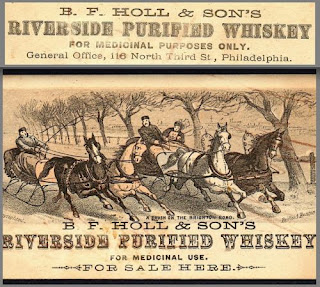 That analysis was hedged a bit by W. Trinder, Analytical Chemist who certified…”That it is free from fusel oil as it is possible to be,” adding:  “I consider it to be an absolutely pure whiskey.”  “As it is possible to be” hints at the truth:   All whiskey contains fusel oil as a natural oily liquid produced in small amounts during alcoholic fermentation.  According to scientific sources, fusel oil contains a combination of alcohols and traces of other components.  The amount present in a 100 proof whiskey typically is between 0.07 and 0.3 ounces per gallon — in other words, a trace. 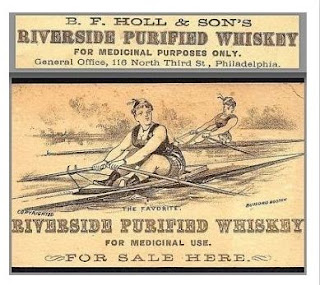 Fusel oil has industrial uses and today commonly is extracted in the distillation of ethanol.  In the beverage industry, however, fusel oil ordinarily has been allowed to remain in finished products, e.g. the whiskey in the liquor cabinet.  Although “fusel” is derived from a German phrase meaning “bad liquor,”  a 2003 Japanese study suggested that fusel oil in liquor and beer may have the effect of lessening the symptoms of hangovers. 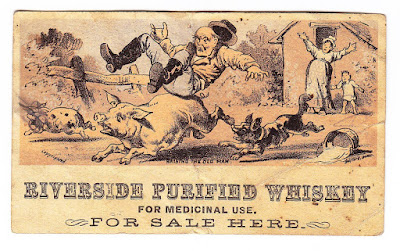 So why were the Holls making such a fuss?  There likely were two reasons:  First, the Philadelphia liquor dealers were emphasizing the medicinal value of their whiskey, a merchandising ploy that increasingly was being employed to offset prohibitionary forces.  Medicines had to be “pure” and fusel oil was an easy  target to denounce as an impurity. 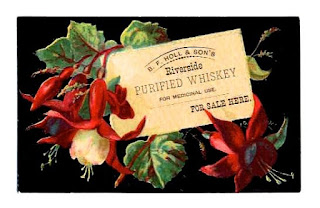 Second, whiskey rectifiers like the Holls were constantly under fire from straight whiskey advocates who claimed, with good reason, that the blending process often resulted in rampant adulteration of liquor.  In response, rectifiers contended that straight whiskey contained, as one claimed: “…a large and dangerous percentage of fusel oil, a deadly poison, and a large percentage of other dangerous and and deleterious impurities….”   Rectifiers claimed that their products through the blending and vatting process removed fusel oil and those other (unnamed) dangerous substances.  Thus the Holls could claim that their Riverside Whiskey had been “purified.”  This was mainly hokum — at the time there was no known way to extract fusel oil from whiskey.

By 1888, B. J. Holl & Son had morphed into a druggist supply house, now located at 824 Walnut Street.   In March of that year, the Holls merited a headline in the New York Times, but the news was anything but good.  It read:  “A Forger Wanted:  The Fall and Flight of a Philadelphia Business Man.”  J. Edgar Holl, described as a “familiar and handsome figure” in Philly had used forged notes amounting to $35,000 to $40,000 as collateral to obtain a $17,000 loan from a Philadelphia bank.  When discovered, J. Edgar took off for parts unknown.

I have failed to find the outcome of this misadventure, but the Holl liquor store disappeared about the same time.  By 1890, father and son were back in local directories, identified simply as “brokers” and located at 1207 Market Street.  Now the son, however, had altered his name to “Jacob E. Holl.”   Obviously the old version carried some baggage.  By 1897 Benjamin had returned to the druggist trade, according to local directories.  His son was no longer working for him. 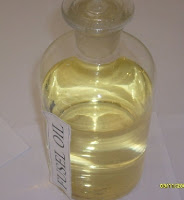 In total the Holls as “whiskey men” had lasted less than a decade, despite their attractive trade cards and their having targeted “fusel oil” as a ploy to market their  Riverside brand.  All the testimonials about that allegedly “poisonous” substance apparently failed to impress the public — nor did their “purified” whiskey.