Jacob and Joseph Dudenhoefer, relatives separated in age by at least 20 years, both fetched up in Milwaukee, Wisconsin, in the pre-Prohibition era to sell liquor, beer and wine.  When Jacob faltered and died, Joseph emerged to keep the Dudenhoefer name fresh before the public.  Each of them left behind ample artifacts by which to be remembered.

Jacob was the elder, born in 1842 in Alsheim, a village in Hesse Darmstadt, Germany, the son of Conrad and Clara (Matern) Dudenhoefer.   Joseph was born two decades later in 1862.  Jacob’s father was a wealthy farmer who owned a large estate with an extensive vineyard where his sons regularly were employed as field hands.  Possibly wearying of farming life, Jacob left home in his teen years and went to Berlin where he was engaged in the dry goods trade for three years before entering the wholesale wine business there until he was about 27 years old.

Seeking a better life in America, Jacob emigrated in 1869 and settled in Milwaukee, a city with a large German-speaking population.  He initially found work as a traveling salesman for the L. Fuldner Company, liquor and wines.  Founded in 1862 this firm was a major wholesale house located in the 100 block of Reed Street on Milwaukee’s South Side.

Meanwhile Jacob was having a personal life.  In 1873  at the age of 31 he married Catherine Lohagen, a woman eight years his junior.  She was the daughter of a prosperous German distiller and brewer who had come to the Wisconsin in 1847 and owned a large farm south of Milwaukee.  The couple would have five children, four daughters and a son who died in childhood.

Jacob stayed with Fuldner for about a dozen years before striking out on his own in 1880.  Incorporated under the name the Jacob Dudenhoefer Company, this wholesale liquor establishment also was located on the South Side, specifically Grove Street (later South Fifth St.).  He was “rectifying” whiskey, that is, buying raw product, mixing and blending it, and bottling it under his own labels. 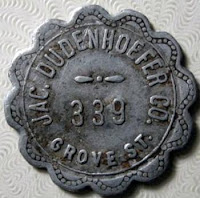 Among Dudenhoefer’s proprietary brands — none of them trademarked during his lifetime — were “Bonfield,” “Elmbrook Sour Mash,” “Elmbrook Rye,” "Hunting & Fishing Club Rye,” "Night Hawk,” and “Yellow Springs,”  He also featured a line of medicinal bitters called  “G. V. G. Germania.”  He was up front that the tonic contained 30 percent alcohol — 60 proof. 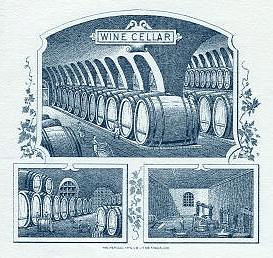 According to a contemporary observer of Dudenhoefer’s trade:  “…From the beginning it grew very rapidly until at the present time it is one of the largest places of business in the city.”  An illustration of his capacious wine cellar bears out that claim.  He also likely was running a saloon in conjunction with his sales, a clue provided by a bar token good for five cents on a beer. 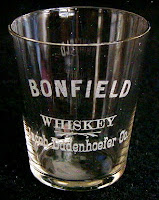 Part of Jacob’s popularity stemmed from his generosity with advertising items given to favored customers among saloons and restaurants. These principally were shot glasses advertising Dudenhoefer brands like Hunting and Fishing Club and Bonfield Rye.  Jacob also was active in the community as a member of the Old Settlers Club, the Milwaukee Music Club, the Ancient Order of United Workmen, and the Deutscher Club.  In politics he was an ardent Democrat but never sought office for himself.

Enter Joseph Dudenhoefer, Jacob’s younger (by two decades) kinsman, possibly a younger brother.  When Joseph turned 16, perhaps with financial help from Jacob, he emigrated and found his way to Milwaukee.  During approximately the next 15 years Joseph was learning the liquor business, working for Jacob or another German liquor wholesaler. 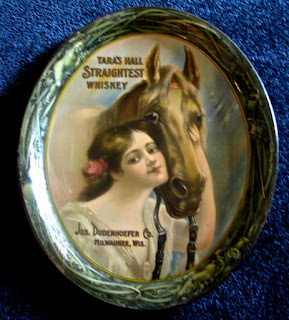 Joseph also had time for a personal life.  In 1893 he married Barbara Thelen, who also had been born in Germany and emigrated to the U.S. with her family.  The 1900 census found the young couple living in Milwaukee’s Eighth Ward with two children, Joseph, 3, and Elsa, 1.  Living with them was Barbara’s mother and two teenagers named Thelen, likely Barbara’s siblings.  Joseph’s occupation was given as “wholesale liquor dealer.”

Then the picture becomes less clear.  In March 1901 Jacob Dudenhoefer died, his burial place not identified.  His firm under his name, however, would be maintained for the next 17 years.  But no evidence exists that it was Joseph who was leading it.  By 1901 he had started his own liquor house, locating it initially at 367-369 Eleventh Street on the South Side and calling it Joseph Dudenhoefer Company.

Joseph had his own proprietary labels, including ”Blue River,” "Pater Oschwald,” "Tara's Hall,” “Rolling Fork,” and “Sunny Castle Rye,” the last being his flagship brand.  He also featured a medicinal called “Sunny Castle Stomach Bitters.”  It sold for $1.00 a bottle and a small wine glassful was to be taken four times a day.   One observer has commented on name of the tonic: “Of the many bitters names, this has to be one of the ‘warmest’ and more positive names that is meant to remind us of our home, family and roots.” Joseph Dudenhoefer’s bottles and advertising artifacts are seen throughout this post. 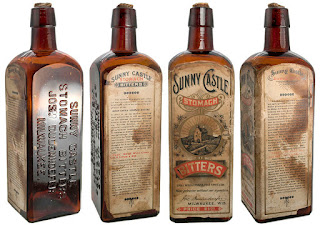 Joseph would know a tragedy of home and family in 1904 when his wife, Barbara, died at only 31 years of age, leaving him with three small children.  She was buried in Block 19, Section B, Row 94 of Milwaukee’s Calvary Cemetery while her husband and friends mourned her passing.  After waiting an appropriate length of time and likely wanting a mother for his children, Joseph remarried.  Her name was Magdaline, known as “Lena.”

With the coming of National Prohibition, Jacob’s former firm shut down, but Joseph, according to business directories, attempted to continue by selling “sacramental wine.”  When that proved to be less than profitable, he switched to real estate.  With the coming of Repeal in 1933, Joseph wasted little time in returning to liquor and wines.  One of his post-Prohibition ads touted “Dudenhoefer American May Wine,” saying:  “Few wines have as old or as distinguished  history as May Wine.  The recipe we use in making this wine has been in the family for four generations.”

Joseph’s story ended when he died in April 1959 in Cudahy, a Milwaukee suburb. He had been retired for some years.  His second wife, Lena, had preceded him in death in 1930.  Both are buried at Calvary Cemetery adjacent to Joseph’s first wife, Barbara.  Joseph’s passing ended an era when Dudenhoefer was a prominent name in Milwaukee’s liquor trade.  The artifacts issued by both Jacob and Joseph insure that name is continuing to be remembered.

Note:  The relationship between Jacob and Joseph has not been firmly established.  Some writers speculate brother, others nephew, still others, a son.  None are definitive.  I am hopeful that a Dudenhoefer relative will be in touch with me to clear up the relationship.