Thomas Oates and Packaging with Style 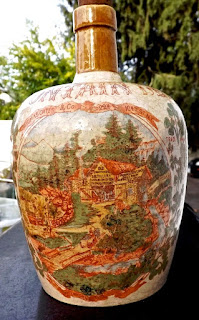 Sometimes a pre-Prohibition whiskey man is remembered by future generations, not for what he contributed to society,  but by collectors for the unusual bottles or jugs in which he packaged his liquor.   So it is with Thomas J. Oates, an Irish immigrant who issued several distinctive whiskey jugs from his 104th Street headquarters in Manhattan.

The artifact that principally has captured collectors is an elaborate transfer-printed jug that describes a scene in a mountain setting, presumably in Ireland since the picture is surrounded in shamrocks.  A stream rushes by on the right side, flowing under a bridge on which a horse-drawn wagon has passed on its trek to a building of stone and wood that houses a distillery.  The name of Oates’ whiskey, “Old Mountain Dew” stands on top. 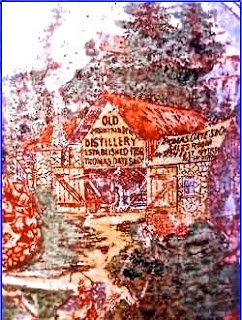 I have isolated the distillery in order better to read the signs.  The taller building at left reads:  “Old Mountain Dew Distillery, Established 1865, Thomas Oates & Co.”   The the roof of the lower structure reads “Thomas Oates & Co, Sales Room, No. 224 East 224th St., New York.” Oates may have had to redesign this label over time.

A second almost identical jug differs in minor design changes.  The one shown left, for example, has quite different looking trees surrounding the distillery.  Both jugs on the back have the same message:  “Thos. Oates & Co., Established 1865, New York.” 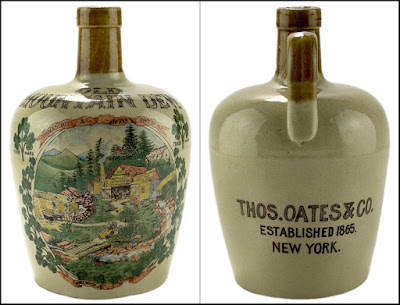 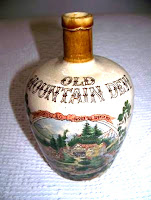 A third version is a ceramic that is tapered at the sides and is slightly smaller than the first two shown here.  It has a transferred label multi-color label that has been adapted to this shape and thus has slightly different proportions. 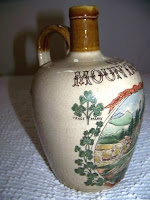 A side view shows the cluster of clovers and a shamrock that Oates claimed as a trademark.  It was a useless gesture, however, since he failed to register the symbol and name with the Federal Patent and Trademark Office.  Two other Mountain Dew whiskeys were on the market at the time, one from the Mountain Distilling Company of Cincinnati and “Mountain Dew Corn” from the Wolff Distilling Company of Louisville, Kentucky.

Oates jugs have no pottery marks on the base and might have been manufactured for the New Yorker in Scotland or England where potteries had developed the art of elaborate transfer printing on pottery, including in multi-colors.   Two or three American ceramics companies had mastered those techniques but my assessment is that the jugs above probably were made in the Old World.

That is where Oates himself hailed from.  He was born in Ireland in September 1864, although records differ slightly, and came to the United States in 1874, according to census data.  At that point he would have been 10 years old so almost certainly arrived with other family members.  Upon being processed at Ellis Island, he never after strayed far from New York, New York.

My surmise is that after receiving some education in this country, he early went to work in one of the many liquor emporiums dotting the Manhattan landscape.  Oates’ jugs claim the establishment date for his firm as 1865, just one year after his birth and nine years before his arrival on these shores.  It was not unusual, however, for a whiskey dealer to claim such if he had bought an existing firm with an earlier date of origin.  Assuming this was the path taken by Oates, establishing exact dates for Thomas Oates & Co. is difficult. 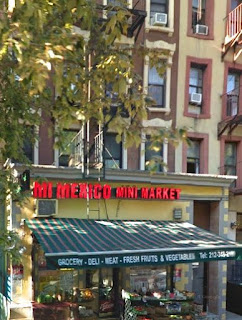 Moreover, despite the bucolic country scene suggested by his jugs, Oates was creating his whiskey in a five story building in Manhattan.  He was a “rectifier,” that is buying raw product from distillers, then blending it and adding other ingredients in order to achieve a certain taste and color.  Located at 224 104th Street, the building is shown here as it looks today.  A Mexican market now operates when once Oates sold Mountain Dew and other liquors.  He and his family lived next door at No. 225.

Thomas married about 1894, when he was 30 years old.  His wife was Mary Broderick, the daughter of Irish immigrants who was born in New York City.  At the time of their marriage, Mary appears to have been only 17.  The 1900 Census found the couple living in Manhattan with two children, Evelyn age 4 and Thomas age 2.  Living with them was an Edmund Oates, age 14, recorded by the census taker as Oates’ son.  Since Edmund was too old to be Mary’s son, his origins are not clear.  By the time of the 1905 New York State census, the Oates family had added two more children, Marion and James.

In the 1900 and later census records, Oates’ occupation was listed as “liquor dealer.”  New York City directories first listed his firm in 1902.  In 1903 the fire department was called to his wine and liquor store to put out a fire, damage undisclosed.  By 1911, Oates had moved his residence to 172 104th Street, still not far way from his business.  At that time it was common for liquor dealers to live in the vicinity of their stores, the better to keep an eye on things. 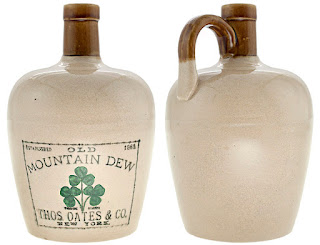 As shown above, Oates also designed a second jug for his Mountain Dew brand whiskey.  This one featured a centrally located Shamrock and the errant claim that it had been trademarked.  Given the quality of the transfer printing and a limit of two colors, this ceramic likely was made in the U.S.A.   He also put his whiskey into glass bottles.  A “coffin” flask is shown here bearing his name and other information in the embossing.  Originally this bottle would have had a paper label.

When Oates finally shut down his enterprise is unclear. He died in 1914 at the age of 70 and with him, apparently, his liquor house and Mountain Dew as a whiskey brand. The coming of National Prohibition in 1919 would have terminated the business in any case.  What is left to us today and for the future is a series of extraordinary Oates-created whiskey containers.