Pity Joseph Leopold of Belleville, Illinois.  Each time his wife was pregnant, he hoped for a boy, a son and heir to inherit his thriving whiskey business.  Time after time, however, the doctor would emerge from the delivery room to announce:  “Its a girl!”  In the final tally the Leopolds would have seven daughters — seven belles in Belleville.  No sons. 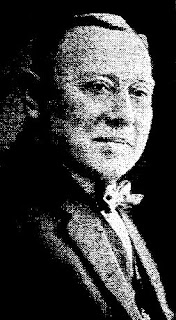 The benignly smiling gentleman shown here, Leopold was born in Belleville in 1859, the son of Joseph Sr. and Philippine Rosche Leopold.  Both his parents were immigrants and early residents of the town, his father, a hotel keeper from Alsace-Lorraine; his mother a native of Bavaria.  Joseph Jr.  was educated in local schools and in the 1880 census listed working as a delivery clerk. That occupation was not to be his life.  While still a very young man he partnered with his brother Edward in a wholesale liquor house.  They called it “Joseph Leopold & Bro.” 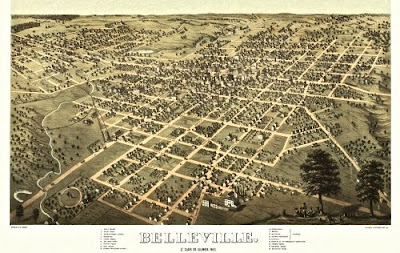 In addition to being their home town, the brothers had picked a good location for their business.  By 1870 an estimated 90% of Belleville’s population was either German born or of German descent.  Many were Roman Catholics, Lutherans and other denominations not adverse to alcoholic beverages.  Moreover, after the Civil War Belleville became a manufacturing center producing nails, printing presses, agricultural equipment, iron castings and stoves, becoming known as “The Stove Capital of the World.”  The largest town in Illinois south of Springfield, a port on the Mississippi River, and the seat of St. Clair County with its many productive coal mines, Belleville was thriving economically.  In other words, it was a good place to open a liquor dealership. 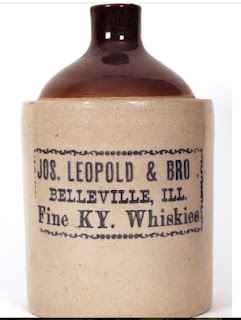 According to contemporary reports, the Leopolds’ enterprise grew rapidly, said to be doing business “on a large scale,” importing more than 80 different kinds of liquor, wine and cordials, as well selling American brands.  They also supplied customers with their own labeled whiskey, likely brought in by the barrel from Kentucky and decanted into jugs of three, four and five gallons.  Most ceramics featured an under-glaze label with an Albany slip top and Bristol glaze body and the motto, “Fine KY. Whiskies.” 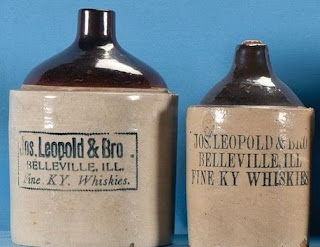 Several variations of labels can be noted on the examples shown here and below. Those containers would have been sold to saloons, restaurants and other establishments.  For retail customers the Leopolds featured a proprietary brand called “Camp Springs Whiskey,”  likely a blend, and “Blooming Valley Pure Rye.”  They never bothered to trademark either name. 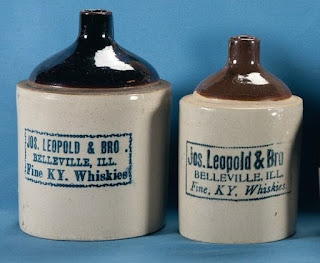 In October 1883, at the age of 25, Joseph married.  His bride was Margaret, called “Maggie,” Rhein, the daughter of Frederick and Charlotte (Nenninger) Rhein. Maggie was a member of a well-established local pioneer family.  Her grandfather, Fred Rhein, a native of Rheinpflaz, Germany, came to the United States in 1839 and settled on a farm outside Belleville where he became known as a stock-raiser and dealer.  This farm of nearly 1,000 acres remained in the Rhein family. 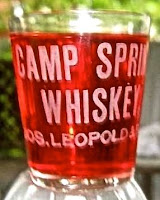 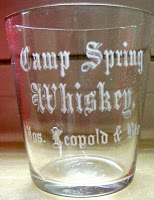 It can be assumed that like most men Joseph Leopold was keen to have a son.  If their business was successful as Leopold’s was, whiskey men were anxious to pass the enterprise on to a male heir.  The history of the trade is replete with stories of sons, as soon as they reached 18 or so, being brought in by a father as a clerk or salesman and taught the business with the expectation of the next generation ultimately taking command.  We can imagine Leopold’s sense of expectation with Maggie’s first pregnancy in 1886.  “Its a girl,” announced the doctor, however, and Elsa joined the family.

The next year August brought Meta to the fold and in September 1889, Alvina.  Three years later the three girls were joined by a fourth, Ophelia, and in 1893, a fifth,  Anie.  As Leopold likely grew more and more desperate for a boy child, he kept hearing, perhaps even in his dreams, “It’s a girl.”  Accordingly, number six, Anita, was born in January 1896 and Marguerite, the last, in March 1898.  The Leopolds had given Belleville a family of seven daughters.  Whatever disappointment Joseph may have felt must soon have been assuaged by the attention girls traditionally lavish on their fathers.  He reciprocated by providing them with a beautiful, spacious home at 112 North Pennsylvania Avenue in Belleville, shown below. 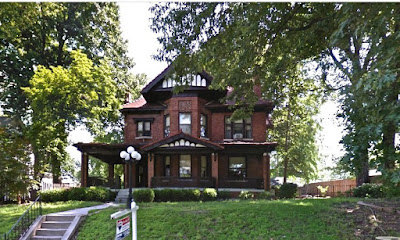 Leopold’s sorrow over not producing a son may also have been lessened by the rise of the “dry” forces in America.  The Temperance Movement in Illinois had its start around 1833 and grew stronger over the years.  By early in the 20th Century, the General Assembly had passed a local option law, allowing cities and counties to ban alcohol.  While Belleville stayed “wet,” surrounding areas were affected and as a result Leopold found his customer base gradually shrinking.  When National Prohibition took hold in 1920, he was forced to shut down Joseph Leopold & Bro. forever.

Although Leopold lived long enough to see Repeal, by that time he was 75 years old and retired.  His brother and partner, Edward, had died in 1929.  Joseph was living in the family home with Maggie.  One daughter had died and others were married, providing him with grandchildren and even two great grandchildren upon whom to dote.  Maggie died in 1939.  Joseph himself had been in failing health, but continued active in his home.  His obituary of June 13, 1940, told the story:  “Joseph Leopold, 80-year-old prominent retired wholesale liquor dealer died suddenly of a heart attack at 1:30 o’clock this morning in his home….” 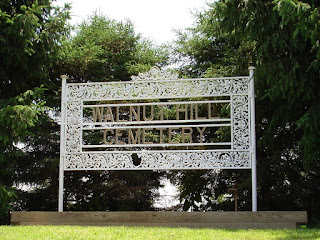 His funeral was held at his home, with the Rev. B. J. Koehler,  pastor of St. Paul’s Evangelical Church, officiating.  With an escort from his fellow members of the Belleville Lodge of the Benevolent and Protective Order of Elks, he was carried to Walnut Hill Cemetery where he joined his wife at  Annex 9, Block 8.  Among those gathered at graveside were six of the seven “belles” Joseph and Maggie Leopold had presented to Belleville.

Posted by Jack Sullivan at 7:01 AM