The Great Booze Rush and Kaufmann Bros. of Toledo

In February of 1919, a judge struck down a Michigan prohibitionary law triggering a immense exodus of Detroiters sixty miles south to still “wet” Toledo, Ohio, to buy whiskey.  This a event became known widely as “The Great Booze Rush.”  Among those ready for the thirsty Michiganders were Kaufmann Bros. & Co., well-established Toledo liquor merchants. 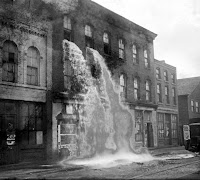 In February 1919, the Great Booze Rush made headlines across America. Michigan had been particularly draconian in enforcing its “dry” laws, typified by the photo here of a raid on an illegal still in downtown Detroit.   A Michigan law, pushed hard by Automaker Henry Ford, also had allowed authorities to confiscate liquor found in private homes.  When the Michigan Supreme Court found the law unconstitutional, the door was open for residents to buy liquor in nearby Ohio, free of search and seizure while bringing it back into the Wolverine State.  Although Ohio also had voted to go “dry,” the new law had yet to go into effect and Toledo, 60 miles from Detroit, was awash in booze.
As the Literary Digest magazine of March 15 put it:  “For several days of license, thousands of men and women packed interurban and railway cars, express wagons, motor-cars, and everything on wheels, for the purpose of carrying liquor in suitcases and valises….The sixty odd miles of road between Detroit and Toledo — the Dixie Highway, nicknamed ‘Avenue de Booze” were jammed with thousands of automobiles.”  Most of them, of course, had been made by Henry Ford. 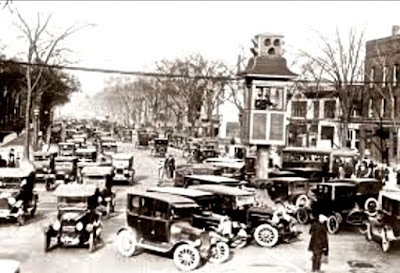 A photo indicates the kind of resulting traffic jams.  Prices for liquor in some Toledo stores is said to have doubled.  Again from the Literary Digest:  “…We are told, there was fear in the breasts of certain residents of that city that the stock would be so depleted as to be insufficient for the three remaining months of Ohio’s wetness. The rush continued.” 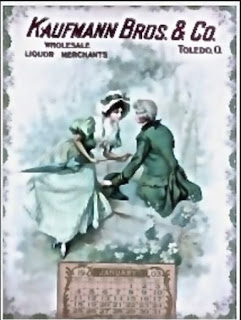 Among the destinations for the thirsty Michiganders was Kaufmann Bros. & Co. liquor house on Huron Street, established in 1895 by Nathan, Emil and Herman Kaufman, all immigrants from Baden-Wurttemberg, Germany.   They were the sons of Herman “Herz” and Mina Rosenthal Kaufmann.   Nathan was the eldest, born in 1854, followed by Emil in 1856.  Herman was born in April 1863, seven months after their father at a young 42 years had suddenly died.

This family tragedy impelled Mina Kaufman with her three sons and two daughters, Marie and Rosa, to leave Germany for the United States.  The 1870 Census shows the Kaufmans living with the family of Joseph Rosenthal, Mina’s brother, in Washington, D.C., where Rosenthal owned a boot and shoe store.  Mina’s children, including Nathan, 17, were in school.   By the 1880 census, Nathan was living with his sister, Marie, in Toledo as boarders with the family of Albert Rosenthal, another brother of his mother, who was a wholesale liquor dealer.  Nathan, now 26, was working for him as a clerk.

In 1892, Nathan returned to Washington, D.C., to be married.  His bride was Mary B. Baar, known as “Mollie.”  She had been born in the District of German immigrant parents Felix and Pauline (Meyenberg) Baar and and was nine years younger than Nathan.  The following year Mollie gave birth to a girl they called Hermine.  In 1896, a boy, Allan Lewis, followed.

Albert Rosenthal had six daughters and no sons to take over his Toledo liquor business and by the late 1880s had moved Nathan into a management position.  When Rosenthal retired from the liquor business at 120 Summit Street about 1894, he sold Nathan the store.  Nathan promptly asked his brothers, Emil and Herman, to join him in founding an enterprise that would bear the Kaufmann name.

In addition to being wholesale liquor dealers, the Kaufmanns were “rectifiers,” that is, blending and mixing whiskeys to achieve specific taste and colors.  They issued a variety of proprietary brands that included:  "Bristol", "Claymore", "Esmond", "Holy Tree Gin,” "Log House,” "Lotus Club Rye,” "Port Industry,” "Pure 100 Special,” “Old Ringold,” “Ringold,” and “Yondota.”  They trademarked Lotus Club in 1893;   Claymore, Port Industry and Old Ringold in 1905 and Esmond and Yondota in 1906. 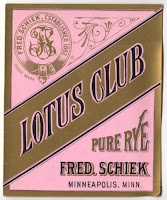 The brothers’ flagship label was Lotus Club, a brand upon which they lavished particular attention.  Several variations of fancy jugs are known in which the Kaufmann’s marketed this whiskey.   Those containers were purchased from the Fulper Company of Flemington, New Jersey, a pottery that used a firing process to apply the hand-painted flowers and gold lettering and trim.  These were more expensive than traditional ceramic or glass containers and often were specialty items for the Christmas season. 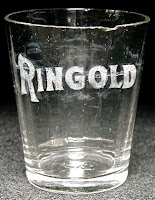 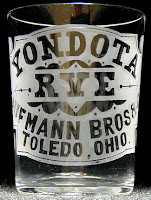 In keeping with the tradition of whiskey wholesalers and rectifiers, Kaufmann Bros. issued advertising items to saloons, restaurants and other drinking establishments carrying their whiskeys.  Shot glasses were a particularly favored gifting item by Toledo liquor dealers.  Shown through this post are a variety of shots, marketing Ringold, Old Ringold, and Yondota Rye whiskey.

The 1900 Census found Nathan and his family living in Toledo, their household also involving an uncle, Isaac Rosenthal, who was working in the liquor store.  Both brothers had married, Emil in 1892.  His wife was Marie, and the couple had two children, Harry, born in 1887, and Albert, born in 1890.   Herman married a woman named Rosa.  No children were listed for this couple. 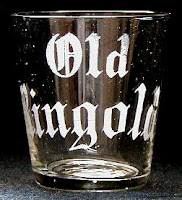 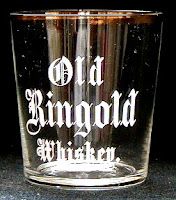 Meanwhile, the brothers were operating a very successful liquor house. Unlike Cincinnati where whiskey-making and selling was a major industry, Toledo had no major distillery and only seven or eight whiskey rectifying and  bottling wholesalers.  Summit Street, however, was a center for the liquor trade.  A Sanborn fire insurance map shows 120 Summit surrounded by at least three other whiskey sales establishments. 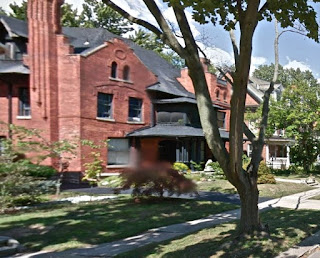 Needing larger quarters for their rectifying operation and wholesale sales, the Kaufmanns moved their operation from Summit to 129-131 St. Clair Street about 1900 and eventually to 130-132 Huron Avenue, the final address.  From their profits, Nathan was able to buy Mollie and his children a large home in Toledo’s “Old West End” at 2114 Scottwood Avenue.  Shown above,  Nathan’s home was his castle, with a mansard roof, turret windows and imposing chimneys giving it a fortress-like aspect.  The 1910 census found him living there with wife Mollie, their two minor children, Mollie’s mother and sister, and two female servants.

Unfortunately Nathan did not have much longer to live.  While still engaged in the liquor trade, in August 1912, only 58 years old, he died.  With his extended family grieving at the graveside, he was interred in Section 13 of Toledo’s Woodlawn Cemetery.  One publication, noting Nathan’s death, called him a “communal worker and merchant.” 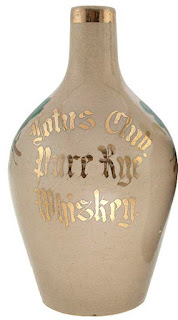 Emil and Herman proceeded on with Kaufmann Bros., operating much as their brother had before them, but with the added challenges of facing prohibitionary forces.  It was those brothers who welcomed the Detroiters during the 1919 Great Booze Rush.  While it must have been gratifying to sell great quantities of their liquor stock, the experience must have been bitter-sweet for them, knowing that within weeks they too would be forced to stop liquor sales and shut down Kaufmann Bros. when Ohio also went “dry.” Lotus Club and their other brands disappeared.

Emil died in 1920 at the age of 64 just as National Prohibition was being introduced.  Herman lived to see the entire 14 years of the “Great Experiment,” dying just as Repeal was voted in 1934.  He was 71.  The three brothers are buried near each other in Woodlawn Cemetery.  A family monument marks the place.

Meanwhile, the Great Booze Rush had become part of  American whiskey history and lore.  It took only three days for Federal and State authorities to re-impose legal and administrative control over the importation of liquor from Ohio to Michigan.  The long  parade of cars on the Dixie Highway ended just a quickly as it had begun.  Said the Literary Digest:   “This last carnival of booze-running drove the last nail in John Barleycorn’s coffin…”