C. Ed Carmichael and the Making of a Tourist Town

During the 19th and 20th Centuries whiskey men dealt with the forces of prohibition in a variety of ways.  Some fought it.  Others tried tactics to get around it.  Still others submitted, went into a different occupation or retired.  C. Ed Carmichael employed a considerably different strategy.  He used “going dry” as a incentive to make his home town of Ocala, Florida, into a tourist destination through a distinctively “wet” idea.

The youngest of four children at his birth in 1869, he was christened Columbus Ed Carmichael, likely a capricious choice of his father, George, and a laugh for his older siblings. Shown above as a young man, he preferred through his life to be known as C. Ed Carmichael.  His father initially worked a farm in Alabama and that is where C. Ed was born.  George Carmichael, a native of the state, eventually grew tired of  both agriculture and Alabama, and in the late 1880s found Florida a more appealing prospect.   It is something of a mystery, however, why he chose Ocala, at that time a sleepy town located in Marion County.  Downtown Ocala in the early 1880s is shown below. 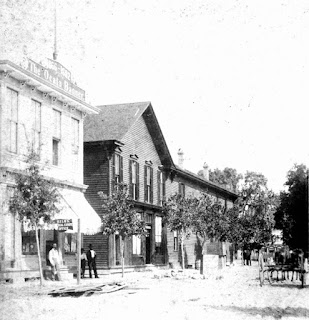 Developed around the site of a fort about 1849, Ocala did not get rail service until a relatively late 1881, a development that spurred modest growth by allowing greater access to markets for citrus and other agricultural products.  In 1883 much of the downtown was destroyed by fire on Thanksgiving Day.  Encouraged to rebuild with brick, granite and steel, by 1888 Ocala was known statewide as “The Brick City.”

C. Ed, while still a teenager relocated to Ocala with his family.  He helped his father establish a combined saloon, wholesale whiskey business, and grocery store there.  He also met Lula Wilkins, shown right.  She had been born in Georgia, the daughter of Robert and Eliza Wadsworth Wilkins.  At the time of their marriage in 1899, he was 19 and she was 15.  They would have one son, born in 1894, whom they named Weller Larue.

The liquor business of Carmichael & Son proved very successful as they developed a thriving mail order business for their whiskey.  Even then under local option, communities in Florida and adjoining states were going “dry” but their residents could still obtain liquor shipped from elsewhere under the protection of the Interstate Commerce Clause of the Constitution.

The Carmichaels shipped their liquor, perhaps distilled on their premises, usually by rail in ceramic jugs. These half-gallon and gallon containers in several formats are shown here and elsewhere in this post.  They have been dug in sites far from Ocala.  The Carmichaels also are known to have used embossed glass containers for their beverages.

The wealth generated by the liquor trade allowed C. Ed in 1906 the money to buy land in an area near Ocala called Silver Springs.  Those springs are among the largest artesian spring formations in the world, producing nearly 550 million gallons of crystal-clear water daily.  The springs form the headwaters of the Silver River, a part of the St. Johns River System.  Carmichael initially used the site as a steamboat landing for passengers and freight, shown here.  At the other end of the steamboat line was Jacksonville, Florida.  A railroad spur ran to Ocala. 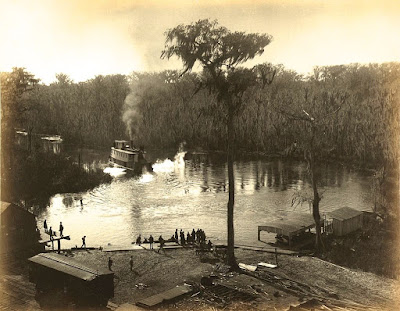 Carmichael also was sensing a rising tide of prohibitionist feeling in Marion County, as groups like Women’s Christian Temperance Union went on the warpath.  They forced a “wet-dry” county referendum in 1908 that apparently sent off alarm bells for C. Ed.  If it had passed, the Carmichael enterprises would have been summarily terminated.  As an alternative to selling liquor, he determined to develop Silver Springs into a tourist destination.  The old freight depot and other ramshackle buildings were torn down.  In their place C. Ed constructed a large bathhouse with facilities for men and women, shown below. He also built a pavilion at spring side.  Plans to build a large hotel on the site were derailed by the onset of World War One. 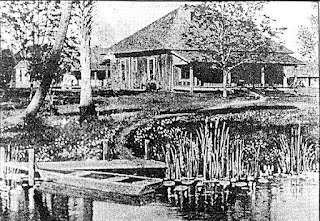 In 1915, same year his father, George, died, Marion County by referendum voted to ban all alcohol sales within its boundaries.  Carmichael & Son with its thriving mail order whiskey business was forced to close down.  Meanwhile, C. Ed had been concentrating his attention on Silver Springs.  He built a house there made of bamboo.  A newspaper photo showed its location at the edge of the water and featuring a small dock.

Meanwhile Carmichael’s marriage to Lula was faltering.  Perhaps she was not happy about moving away from town life in Ocala to the banks of Silver Spring.  They divorced.  C. Ed later married a second time.  She was Helen Hoag, a school teacher, originally from Minnesota.  He was about 51 at the time of their marriage, she was 32. 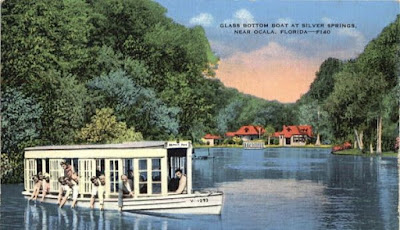 In 1924, now 61 years old, Carmichael leased his Silver Springs holdings to other  entrepreneurs who greatly expanded the tourist facilities.  Among innovations were glass bottomed boats that floated over the lucid waters allowing people to see more than forty feet to the bottom.  Postcards from Silver Springs often featured the boats with passengers eager to feel the beautiful cool waters. 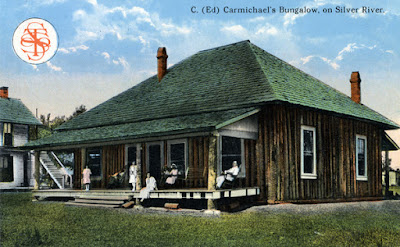 Carmichael remained active in on the Ocala scene, serving as a Marion County commissioner and owning a successful tourist court near the springs.  Shown above is a postcard view of C. Ed’s bamboo home on the adjacent Silver River. I speculate that the man sitting comfortably in a rocking chair at the right side of the porch is none other than Carmichael himself, content to look out at the tourist mecca he had helped create. 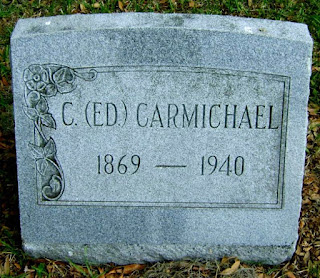 C. Ed died in 1940, age 79, and was buried in Marion County’s Woodlawn Cemetery as his widow and his many friends mourned by his graveside.  Helen would join him there twenty-six years later.  Carmichael had lived long enough to see National Prohibition come and go.  As he contemplated his long life, he must have smiled at his decision not to let the forces of “dry” alter his commitment to his adopted town but rather to use them as an incentive to make Ocala the tourist destination that it remains today.

Posted by Jack Sullivan at 8:25 AM