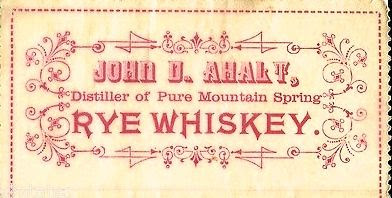 John D. Ahalt, one of Maryland’s storied farmer-distillers, believed that “rocking and rolling” his whiskey barrels on sea journeys to far-off places improved the quality of the liquor.  Accordingly he shipped his products to Rio de Janeiro and back, marketing the result as “Whiskey that is all Whiskey.”

Ahalt’s Mountain Springs Distillery was located in Frederick County, Maryland, in the foothills of the Appalachian mountains near Burkettsville, the picturesque small town shown below.  In 1848 a flour mill had been erected on the site, about four miles from a railroad station on the Baltimore and Ohio line.   Ahalt in 1879 saw the possibility of turning the structure into a distillery.  He hired a professional distiller named Francis Hughes, who stayed with his family, to make Maryland rye whiskey while Ahalt concentrated on farming the required crops.

In a commentary dated 1898, a History of Western Maryland observed: “It is a well known fact that the grain grown on the fertile plains of Frederick and Washington Counties is of a quality so fine that no matter what it is converted into it always produces the best of its kind.  Recognizing this fact and comprehending its value, J. D. Ahalt started the distillery for the manufacture of pure rye whiskey.”   With his location at the foot of South Mountain, Ahalt also had the benefit of good spring water. 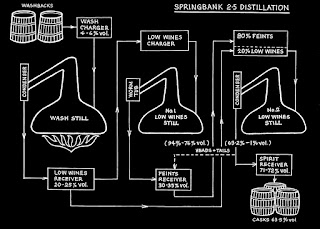 Ahalt was known as an innovator, carrying out on his own what was described as “costly scientific experiments.”  One result of his efforts was a move to “triple distillation,” a method of making whiskey favored in Ireland but not used in Scotland or widely employed in the United States.  A diagram shown here graphically illustrates how the process works.  Note that at the end the triple distilled whiskey would be contained in casks or barrels.

Ahalt would age the whiskey a few months in his warehouse, then ship it in barrels by railroad to the Port of Baltimore, above. There the casks would be carefully loaded into the hold of a steamship, likely a side-wheeler, and sent on its way. 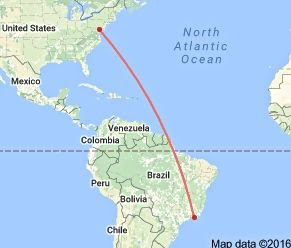 A map shows the route south from the North Altantic, around the horn of Brazil to the port of Rio, a trip of more than 4,800 miles as the crow flies, longer by sea.  The whiskey might be unloaded and stored for a while in Rio or be sent immediately back to Maryland for bottling by Ahalt.  Given the rough Atlantic waves, the barrels would get plenty of rocking and rolling along the way.

The theory was that sloshing around on the high seas mellowed and aged the whiskey in beneficial ways that sedentary storing in warehouses did not do, imparting a “unique and most agreeable softness.”  The distiller also was advantaged by not being federally taxed for warehouse withdrawals for shipping. Moreover, the costs were relatively low.  A typical barrel yields about 212 quarts of whiskey.  Ahalt’s trip to Rio and back added only pennies to the production cost of each bottle.

As his whiskey braved the briny deep, Ahalt was enjoy a landlubber’s home life in  Burkettsville.  Born in Maryland in 1847, he was educated in local schools before settling on a Frederick County farm.  In  1870, according to state records, he married Harriett Jeanette Willard.   She was a native of Maryland and of a similar age.  Their first three children were girls, Blanche, Anna, and Callie with a son, John H. Ahalt, born in 1883.    The 1900 U.S. census found the family living together in Burkittsville,  Ahalt’s occupation given as “farmer.”  In the 1910 census, however, he was recorded as a “farmer-distiller” and John H. was listed working as a salesman for his father. 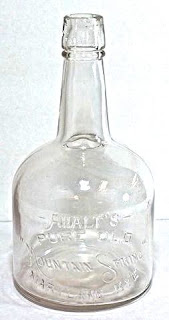 John D. Ahalt marketed at least two proprietary brands: “Antietam Rye,” named for the famous Civil War battle that had taken place nearby in Maryland, and “Mountain Spring Rye.”  He never bothered to trademark either label, an omission he might have regretted when Loeb-Bloom & Company of Paducah, Kentucky, registered Mountain Spring as theirs in 1905.  The Ahalt version was marketed in clear embossed glass quarts that read:  “Ahalt’s Pure Old Mountain Spring Maryland Rye.” 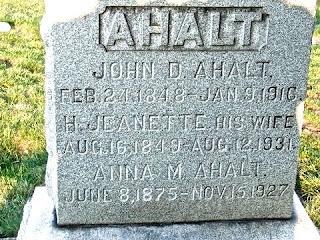 In 1916, Ahalt, only 56 years old, died and was buried in the Burkettsville Union Cemetery.  His plot is recorded in section 3, row 7, and grouping 5.  A headstone for his grave indicates that his wife, H. Jeanette, and a daughter, Anna, are also buried there.  Ahalt’s, son, John H., apparently had no interest in managing the property and shortly after moved to Hagerstown, Maryland, where his occupation was listed as “laborer.” 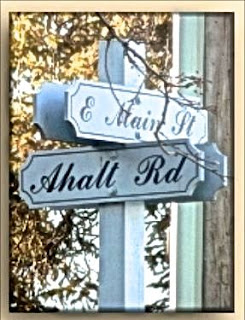 The business was sold and, according to one report,  the name changed to “Pure Rye Distilling Company.”   Not long after, the plant was closed permanently by National Prohibition.  Both Antietam Rye and Mountain Spring Maryland Rye disappeared as whiskey brands.  In time the distillery that John Ahalt built was torn down and the land returned to agriculture.  Today no trace exists of the facility.  There is, however, an Ahalt Road in Burkettsville to remember a man among whose “costly scientific experiments” was rocking his whiskey to Brazil and rolling it back.

Note:  This is a belated thanks to Paula (nee Ahalt), a distant relative of John Ahalt, from whose "Sweet Pea" website I obtained some of the information found here, as well as the image of the glass jug shown above.  Her post of August 8, 2016 contains additional good material and images related to the Ahalt distillery at Burkettsville.