They wore fedoras, not ten gallon hats.  They packed pencils, not six-guns.  Yet Jewish whiskey merchants Ben Baer and Harris Franklin had considerably more to do with the taming of Deadwood, Dakota Territory, than those with the big hats and guns and even those who wore a badge. 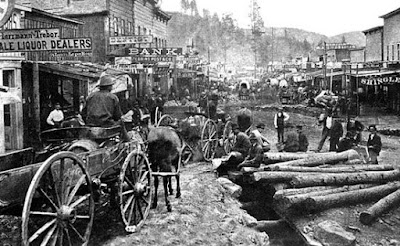 Shown above as the the town looked about the time the partners arrived, Deadwood was settled illegally in the 1870s on land that had been granted to Indian tribes in the 1868 Treaty of Fort Laramie.  That agreement was quickly forgotten in 1874 when gold was discovered, triggering the Black Hills gold rush. A new and rowdy town sprung up, one that rapidly gained a population of 5,000.  Murders were common in Deadwood — among them Wild Bill Hickok’s — and justice episodic and far from impartial. 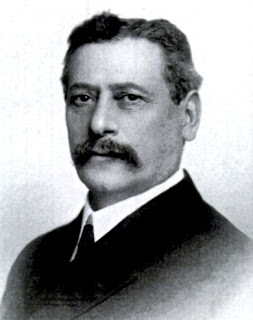 That was the environment that greeted Baer and Franklin when they arrived about 1876.  Neither may have been surprised.  The older was Baer, born in Paris, France in 1846.  He had arrived in the U.S. about 1871 at the age of 17, ultimately settling in Yankton, D.T., itself frontier town near the Iowa border.  Shown right, Baer became involved in the liquor trade in Yankton.

It likely was the draw of the boomtown Deadwood, that drew Baer to travel 400 miles west across Dakota Territory in August 1876.  According to historical sources, he carried with him “a plentiful supply of alcoholic spirits” to slake the thirst of the miners and cowmen.  Unlike the Oklahoma Territory, liquor was legal in the Dakotas as long as no sales occurred on Sunday. 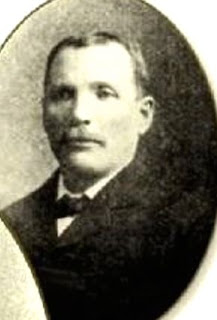 Harris Franklin, born “Finkelstein,” in 1849 was from an area in contention between Poland and Russia in Central Europe,  There are conflicting dates about when he arrived in the United States but in any case, he must have come with family because he would have been too young to have traveled on his own.  Shown left, Franklin ultimately settled in Burlington, Iowa, where he was engaged in business.  In 1870 he married Anna Marie Steiner there.  A year later their only child, Nathan, was born. 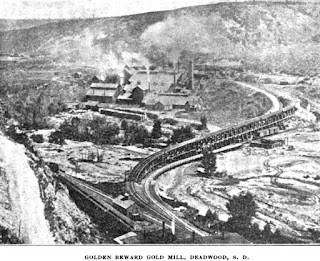 Gold also seems to have motivated Franklin to make the move to Deadwood.  He apparently had accrued considerable land and other holdings in Iowa.  He sold off everything and with his small family traveled more than 825 miles west to Deadwood, subsequently buying the Golden Reward Mine outside of town. It would prove to be a lucrative investment.

Franklin’s partner in the mine was Ben Baer who earlier had experienced his own stroke of luck.  A Deadwood history described it:  “One of his friends at the poker table had his money tied up in cattle.  Ben had won every pot; however, money was scarce due to a drought that left cattlemen with starving herds, so Ben had to accept his winnings in emaciated cattle.  The next morning he awoke to a pouring rain that continued for weeks, ending the drought and bringing fresh grass to the pastures.   To everyone’s surprise, his herd flourished.”  Baer sold the cattle and with the proceeds joined Franklin in buying the mine. The photo above shows Ben, seated center, recreating the poker scene for friends.

About 1885, Franklin also joined Baer in his Deadwood wholesale liquor business. Shown above is a letterhead dated in November of that year that advertises “Ben Baer, Wholesale Dealer in Fine Liquors and Cigars.”  Overprinted on the document is the name, Franklin & Baer. 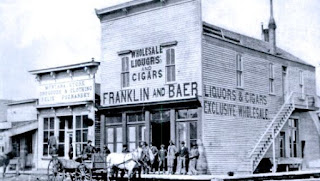 Located on Main Street the store was two floors with a false front and a front door wide enough to allow barrels of whiskey, wine and other liquor to be rolled out to waiting wagons.  They would be transported to one of the many Deadwood saloons for decanting and serving.  Before long Franklin & Baer were the largest liquor wholesalers in the region with an annual trade approaching $125,000 annually, equivalent to more than $3 million today. 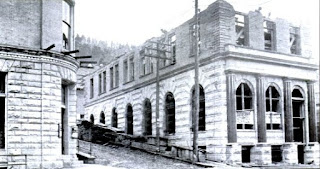 Their success in mining and whiskey emboldened the partners to engage in other enterprises designed to bring civilization to town.  In 1878  they formed and owned their own financial institution, the First National Bank of Deadwood.  That bank, left, became noted for having printed almost $2 million worth of national currency over a period of 58 years. 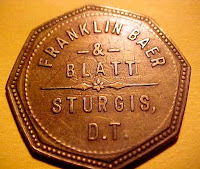 They also dabbled in railroads, spearheading the Whitewood and Wyoming Railroad Company with a prospective route of 50 miles from Deadwood to the Wyoming state line with four branches totaling an additional 30 miles.  I can find no evidence, however,  that that this line ever was brought to fruition. With a third partner, as indicated by a bar token, Franklin and Baer also opened a saloon in Sturgis, D. T., a hamlet about 15 miles west of Deadwood.

Amidst all his business dealings, Baer at 36 years old found time for romance.  In March 1884 married Ida Florsheim in St. Joseph, Missouri, the bride’s home town.  They would have a family of five children;  Ira Ben, born in 1888;  Helen, 1890; Jerome and Fernand, 1892, and Edwin, 1898.  A year later Ida tragically died, leaving Ben with a household of children under 12.  At some point his wife’s sister and her husband came to live with the family, likely to help look after the youngsters. 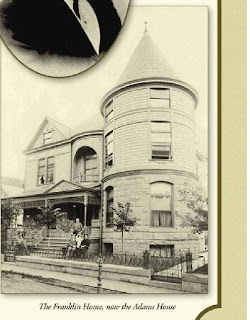 Franklin’s growing fortune from whiskey and other investments eventually  steered him into construction.  Between 1883 and 1890 Harris and Anna purchased four parcels of land on which to build a mansion.  In 1891 they commissioned Simeon D. Eisendrath, an architect from Chicago, to design their home in the popular Queen Anne Victorian style.  One local newspaper reported: “When completed the residence will equal in point of beauty anything of its kind west of Omaha.”  Shown here, the Franklins’ house was centrally heated, had hot and cold running water, was lighted by electricity, boasted a telephone, and servants were summoned by electronic bells.  Today it is a National Historic Landmark. 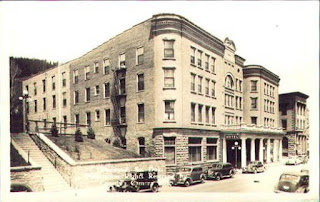 Ambitious as this building project might seem, it was overshadowed by  Franklin’s commitment to building a fine hotel in Deadwood.  For years business leaders had been attempting to build one without success.  One abandoned  foundation ended as a temporary swimming pool for local children.  Not until the whiskey dealer offered to match any contribution dollar-for-dollar in 1902 that construction began in earnest;  the hotel, finished a year later, was named for him.  Sadly, by this time Anna Franklin’s health had faltered and she died in 1902,   never to see the marvel of modernity called the Franklin Hotel.  Shown here,  half of its 80 rooms had private baths, a novelty at the time.  Theodore Roosevelt, William Taft, Buffalo Bill Cody, Babe Ruth and world heavyweight champion John L. Sullivan were among the hotel’s guests in its heyday.

In ensuing years the partners continue to thrive as Deadwood was transformed from a mining and cattle town to a regional economic center.  With Prohibition forces strong in South Dakota, however, Franklin & Baer were forced to shut down their wholesale liquor house about 1916.   Nor could the bar at the Franklin Hotel ever again sell alcohol.

In July 1921, Ben Baer died in St. Paul, Minnesota, where at the age of 75 he may have moved to be closer to his children and grandchildren.  He was buried at Mount Zion Temple Cemetery in St. Paul.  Baer was followed to the grave two years later by Harris Franklin who continued to live in Deadwood.  He was buried beside Anna in the Mount Moriah Cemetery there.   The headstones of both men are shown here.

Franklin and Baer were foremost among businessmen, many of them Jewish, who during four decades transformed Deadwood from a rowdy and dangerous frontier outpost into a modern American city.  In his book, “Deadwood:  The Gold Years,” author Watson Parker observed:  “If the gold brought money, the merchants brought stability….The miners brought in money, and spent it, and called for goods and culture;  the merchants and businessmen mined the miners, and seem to have made the better thing of it.”

Note:  Some of the information for this post and several of the illustrations are from the book, “Jewish Pioneers of the Black Hills Gold Rush,” a volume in the “Images of America” series.