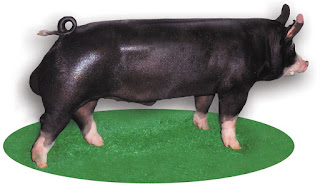 Berkshire swine: (bûrk`shər, bärk`–, –shĭr), one of the oldest of the improved breeds of swine, originating in the county of Berkshire in south central England. This variety was imported to the United States in large numbers between 1830 and 1850 and adapted itself to all parts of the country. Berkshires are of medium size, generally smooth, and somewhat longer in proportion to depth than other breeds. Their ears stand erect, their noses are short, and their color is black with white feet, nose, and tail. In the U.S. today it is considered a fairly rare breed of hog —  From a Wikipedia entry. 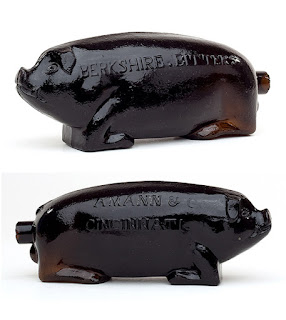 The piggies produced by Amann & Company of Cincinnati similarly are considered rare by the many collectors who prize the bottles that once held the liquor house’s “Berkshire Bitters.”  The Amanns’ was a family liquor business, one in which members over time seemingly played interchangeable parts.  As a result it is difficult to credit any one Amann for having conceived of naming a bitters “Berkshire” and putting it in the pig shaped bottles shown throughout this post.  Today these porkers avidly are sought by collectors and can fetch up to $1,000. 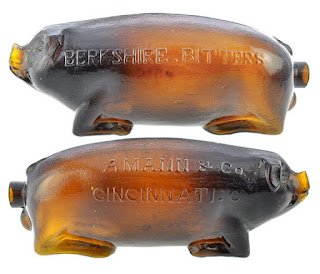 Liquor wholesalers who featured a line of bitters, advertising them as “medicinals,” was not unusual for the times.  The government put a considerably lighter tax on bitters than on whiskey, even though the alcoholic content might have been similar.  That certainly was a factor in the heavy merchandising the Amanns’ lavished on Berkshire Bitters.

According to an email sent me, the recipe for that elixir came from the wife of William McRoberts who was a close friend of Edmund Amann [See my post of November 2016 on McRoberts.]:  My correspondent wrote: “Grandmother Harriet Conway McRoberts had a recipe for bitters that William gave to the Amann brothers as he was on the decline.  They put that bitters recipe in little pig bottles.” 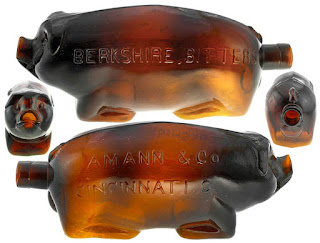 Two Amanns were born in Europe, the exact place variously given as France or Germany.  Daniel was the firstborn in 1822, followed 13 years later by the birth of Anthony.  In 1839 their father uprooted the family and they immigrated to the United States, settling in Cincinnati.  There a third brother, Edmund, was born.  Educated in local schools, the brothers appear early to have gone to work in the burgeoning local distilling and whiskey merchandising industry.

When McRobert’s firm — Boyle, Miller & Company — faltered, the brothers pooled their resources to buy the liquor house in 1868.   Two years later they changed the name to Amann & Company, with Anthony, Emanuel and David as the executive cadre.  Their first address was 57 East Second Street and thereafter they never strayed far from that major commercial avenue, moving in 1872 to 59 East Second Street, a large four story building, 25 by 190 feet in dimensions.  Advertising themselves as wholesale liquor dealers, they conducted a major rectifying — whiskey blending — operation, using both the first and second floors for the process.  For that purpose they were said be “replete with all the mechanical devices and machinery requisite to that branch of the business.”  Their whiskey brand names were “Amann Rye” and “Berkshire Rye,” as noted on the back-of-the-bar bottle shown right.

The federal government taxed rectifiers and wholesale liquor dealers in addition to the taxes imposed on the distillers from whom they relied for supplies.  The Amanns and others in their trade were required to keep careful records of the spirits they produced, available for scrutiny at any time by federal officers in order to determine the amount of tax.  Owners were allowed to delegate the task of making entries but held responsible for seeing that they were promptly and properly done.   In 1876, the government hauled the Amanns into U.S. District Court in Cincinnati, claiming several instances in which entries were omitted or made erroneously. 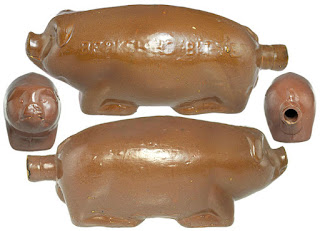 Suddenly the Amanns were fighting for their corporate life.  If found guilty the government might have had the right not only to confiscate their stocks of liquor but also to seize their rectifying plant and equipment.  The brothers mounted a
spirited defense, asserting that they had “placed a competent bookkeeper in charge of that branch of their business,”  that they had moved rapidly to rectify the errors, that in each case the taxes were fully paid, and that no loss occurred to the government from the mistakes.  The judge was impressed with their arguments and to the great relief of the Amanns found them not guilty.

Meanwhile, Edmund had begun a family.   After marrying a British-born woman named Mary during the late 1860s, the couple had a daughter they called “Lizzie,” born in 1869.  The 1880 census found them living in Newport, Kentucky, across the Ohio River from Cincinnati.  Residing with them was elder brother Daniel, still a bachelor at 50 years old.  The occupations of both men were recorded appropriately as “wholesale whiskey dealer.”  Anthony had married in 1861, a woman named Margaret Apple.  Their union produced at least one son, Edwin, who would enter the liquor firm upon attaining maturity.

Like many rectifiers, Amann Bros. needed a consistently available supply of “raw” whiskey for their products in order to thrive.  This was a continuing problem, one exacerbated by the advent of various whiskey “trusts” that hiked prices on spirits available to rectifiers.  The brothers began to look for a distillery they could buy.

In 1890 they found one.  Initially known as the Almond Distillery it was located about 100 miles directly south of Cincinnati and three miles north of Nicholasville, in Jessamine County, Kentucky.  At the time of the Amann’s purchase the plant was operating as the Old Lexington Club Distillery and its flagship brand was “Old Lexington Club.”  They paid $10,000 for the property, a relative bargain likely related to the plant being located on low ground and subject to period flooding.  The photo below indicates the extent of the facility. 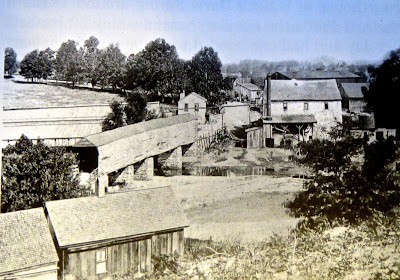 Insurance underwriter records compiled in 1892 indicate that the distillery was built of stone with a fireproof slate or metal roof.  The property included a frame cattle shed 75 feet southwest of the still and a corn crib.  The cows would have been fed the spent mash from the distillery and in months when not operating, from corn in the crib.  Three bonded warehouses were sited northwest of the still, two of frame and one of metal construction, all with shingle roofs.

From all indications, the Amanns, now assured of a steady supply of product,  were thriving during the 1880s.  In October 1887, however, Daniel died, 65 years old.  He was buried in Evergreen Cemetery, Campbell County Kentucky, Section 2, Lot 3.  With Edwin now working as a clerk, his brothers, carried on.  At this point Edmund Amann appears to have been guiding the business — but only for a limited time.  In 1903, for reasons shrouded in the mists of history, he sold the Old Lexington Club Distillery.  Amann & Company subsequently disappeared from local directories, leaving only its Berkshire pigs to perpetuate its memory. 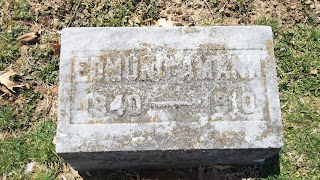 Edmund Amann died in 1910 at the age of 70 and was buried in Maple Grove Cemetery in Nicholasville, not far from his former distillery.  His gravestone is shown here.  Anthony, the youngest, lived on through National Prohibition and Repeal, dying in October 1936.  He lies buried in yet a third cemetery, Gate of Heaven, in Hamilton County, Ohio, Section 14, Lot 148. 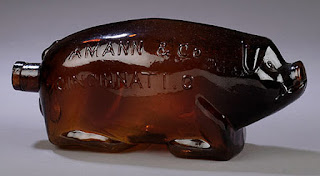 Since the demise of the Amann brothers, one of the challenges in bitters collecting has been to acquire all four variants of the glass Berkshire Bitters pigs.  Aficionados have divided the piggies into three types:  short thin, short fat, and long fat.  Although their color is given as amber, as seen in the examples shown here, significant variations exist in shade.

Note:  I was researching an article on the Amanns as liquor dealers when I came across Ferdinand Meyer’s Peachridge Glass post about their figural pig bitters  and decided to make those bottles the theme of my vignette.  I have taken a number of illustrations from his piece and am grateful for his continuing encouragement and support of my writing efforts.