The Irish “Johns”and Their DC Saloons

For many of of the Irish who inhabited Washington D.C.  during the late 1800s and early 1900s, the occupation of saloonkeeper was a familiar one. Among them were three men of Irish descent, all named “John,” — John Fitzmorris, John Keady and John Gleeson. The three Johns left their mark on Washington and on bottles by which we can remember them.
John Fitzmorris was born in 1860 in Ireland and had come to America, likely with his parents, at the age of 13. When he was 40, the 1900 U.S. Census found him living in a boarding house in the District, still unmarried. He gave his occupation as “saloonkeeper.” His establishment was at Seventh Street and Pennsylvania Avenue, the thoroughfare known as “Rum Row.” An 1890s publication listed 109 neighborhood brothels and 50 saloons on the street and pointed out that President Grover Cleveland could see the goings-on from his bedroom window. Fitzmorris apparently was successful in this setting and by the early 1900s had built a hotel on his corner, one he called “The Commercial.” 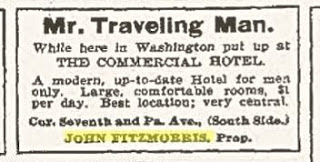 In a 1905 Washington Post advertisement, the genial Irish proprietor called on “Mr. Traveling Man” to put up at his place, strictly a stag hotel.  The ad termed it modern and up-to-date with large comfortable rooms and a good, central location. The text failed to mention that Fitzmorris also was running a popular saloon downstairs where a tired traveling man might take a drink of an evening or even meet an understanding woman. The proprietor also sold package goods over the bar for passersby or to a hotel guest wanting a nightcap in his room. 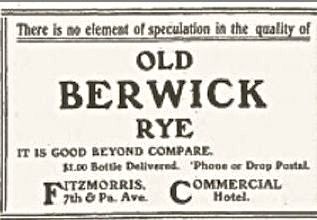 Shown here are two flasks bearing the embossing of the Commercial hotel, complete with its address.  They may once have had a paper label for Fitzmorris’s house brand, “Old Berwick Rye.” He advertised that whiskey frequently in Washington newspapers touting it as “good beyond compare.” He would deliver a bottle to your residence for $1.00. Just phone him up.

As Pennsylvania Avenue was being redeveloped in the 1940s, archeologists dug up many relics of the street’s rowdy past. A major find was a cellar full of whiskey and beer bottles. Among them were relics of John Fitzmorris Old Berwick Rye. No indication was given in the press where, or even whether, the bottles were preserved in anything like a museum setting.
Although Irish saloonkeepers often were very active in local and state politics, Fitzmorris was not. Irish-American John Keady was more to the type, a high profile DC Democrat and, as his obituary put it, “prominently connected with many civic and religious organizations.” He had been born in the District of Columbia in 1857, the son of Daniel and Ellen Keady, both Irish immigrants. The 1880 census found him living in Georgetown with his parents and working as a clerk in his father’s grocery store at 3316 M Street N.W. Next door was a saloon at 3312 M Street N.W. run by a Dennis T. Keady, likely his uncle.

About 1877 at age 33 John married a woman named Mary and they had four children, three girls and a boy. In time he appears to have inherited the proprietorship of the Keady saloon. He also was mixing up and bottling whiskey obtained from the Hannis Distilling Co. just up the road in Baltimore. Called “Hannisville Whiskey,”  he bought it by the barrel and sold it under his own label in embossed bottles. 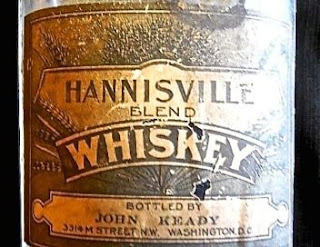 Keady’s business apparently did not intrude on his political life. An ardent Democrat, he was a strong advocate for ratification by Congress of home rule status for the District of Columbia. He was sent by the party central committee to the National Democratic Convention in Baltimore in 1912 to campaign for the cause. When President Wilson subsequently appointed a District commissioner opposed by members of Keady’s group, he strongly opposed the choice. Keady died in February 1903. 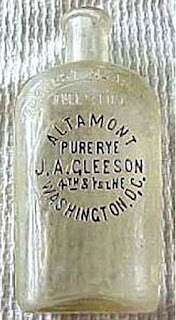 The third Irishman, John Gleeson, seems to have avoided the census taker throughout his DC career. He first showed up in a public record listed in a local business directory running a saloon at 335 Eye Street, an establishment that appears to have survived until about 1916, just before Congress voted DC “dry.” It appears, like Fitzmorris, he may have been a bachelor, living over his establishment. 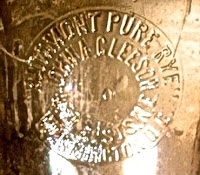 Gleeson’s brand was “Altamont,” a brand he sold over the bar at his saloon. It came in several sizes including a pint flask  with a characteristic circular label containing his name. Altamont Pure Rye also came in a half-pint with the proprietor’s name in a straight line and the address of his saloon.  N.W. Matthews & Co. of Baltimore, listed in local business directories from 1888 to 1912, was the issuing wholesale dealer for this proprietary brand.
The end of “Rum Row” and, indeed, all DC saloons occurred in 1917 with laws prohibiting sales of alcohol. By that time Keady had died, but the fate of Fitzmorris and Gleeson remains shrouded in the mists of the past. We have their bottles, however, to remind us in DC of those whiskey men, three Irish saloonkeepers named John.