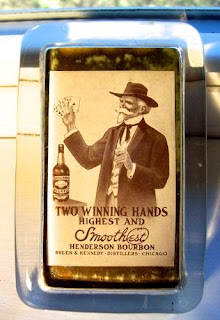 "Smooth whisky - good! Smoother whisky - better! Smoothest Henderson Bourbon - best! “   That was the mantra of Martin J. Breen, president of a Chicago wholesale liquor house.  Breen found, however, that while he was asserting “smooth,” being active in the whiskey trade had its own particular rocky  times in store for him over a foreshortened life.

For example, in 1905, after Congress had strengthen trademark laws,  Breen decided to register three of his brands.  Among them was “Comrade Whiskey” that involved the word “Comrade” beneath which was a picture of a soldier and a sailor, each with a glass of whiskey in his hand and between them a monogram that spelled out “B & K”  for Breen & Kennedy, the name of the firm.  Filed in April 1905 it was federally approved the following July.  The name was received by the trade without comment.

Breen then trademarked his flagship brand, Henderson Bourbon.  That application was filed about a month later and involved the word “Henderson” on a ribbon design, beneath which the B & K monogram appeared.  Almost immediately the Buchanan-Anderson-Nelson Company of Louisville, representing a deep pockets conglomerate of Kentucky distilleries, opposed the registration.  That firm claimed that “Henderson” was a fraudulent attempt on the part of Breen to appropriate their trademark and “calculated to deceive and mislead the public into the false belief” that his whiskey was from the Buchanan-Anderson-Nelson Co.

When the Examiner of Interferences of the the Patent & Trademark office dismissed the Kentucky company complaint, it sued in the Federal Court of Appeals of the District of Columbia, requiring Breen to bear the expense of a bruising court battle.   After hearing the evidence, the judges in June 1906 held that “…There is not the slightest similarity between the two marks except as to the words ‘Anderson’ and ‘Henderson,’ that both are well-known names of persons, counties and towns, and there is no reasonable ground of confusion between them.”   Breen had won, but at a significant financial cost. 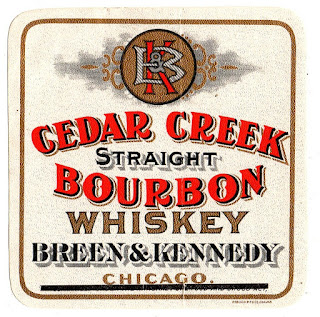 The passage of the Pure Food and Drug Act of 1906 posed another challenge for Breen when in 1908 new modifications were added requiring the “proper labeling” of bottles, jugs and casks.   One of the features of the new law was an attempt by Kentucky bourbon interests to brand only straight, unblended, spirits as real whiskey.  Blends such as those provided by rectifiers like Breen were threatened with being labeled “imitation whiskey.”  Some rectifiers openly talked of trying to evade or nullify the new clauses.

With his liquor sales grossing $400,000 a year, equivalent to $10 million today, Breen had become a representative voice for Chicago’s rectifiers who numbered in the dozens.  Quoted by the Chicago Tribune, Breen took this new challenge in stride.  While blaming the new regulations on “some radicals of the Whiskey Trust” who were seeking to injure independent dealers, Breen claimed that it was the Trust not the rectifiers who were hurt. 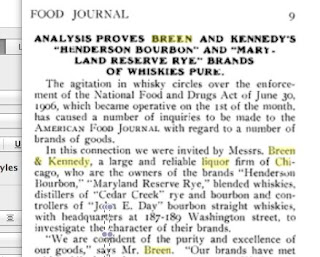 “The Trust has dealt in straight whiskey and we deal in blends,” he told the newspaper.  It is almost impossible for anyone to utilize a straight whiskey.  It must be blended.  The Trust is unable to do so because they lack proper equipment to handle a blend.  Hence we benefit by the new law and the boot is now on the other foot.”  Although Breen’s assertions were grossly optimistic, they were published widely and may have helped stall calling blends “imitation whiskey.” 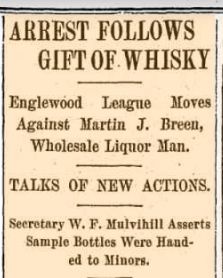 Breen’s third challenge was not so easily met.  In November of 1908 he was arrested on a charge of giving liquor to a minor in Englewood, Illinois, a Chicago suburb, and released only after posting a $500 bond.  He was arrested on a warrant from the secretary of the Englewood Law and Order League, a group dedicated to stamping out all forms of illegal drinking, gambling and other vices apparently rampant in town.

The warrant claimed that nine-year-old Elmer Flodin had been enticed to drink  whiskey.  “My boy had left the house on his way to school and was standing on the front porch when a man came up to him and gave him a bottle of whiskey,” his father related. “He hardly knows what whiskey is and is certainly not fit to handle it.”  Down the street Flossie Thompson, age nine, and Emma Lindquist, thirteen, also reputedly were given bottles of liquor.

Little Elmer’s outraged father,  A. S. Flodin, a member of the Law and Order League, was reported to be determined to push the prosecution of Breen.   The law provided a fine of from $20 to $100 or a jail sentence of from ten to thirty days, or both, and the League promised to ask for a jail sentence.  In his defense, Breen issued a statement admitting that his firm had been distributing sample bottles of whiskey but insisted that they were being given only to adults.

In checking with the individuals distributing the bottles, Breen asserted, all of them had strongly denied delivering any bottles of liquor to children.  He intimated that Breen & Kennedy were being framed by prohibitionary forces:  If bottles of our whiskey were delivered to children it probably was done by persons not connected with us in any way and who desired to prejudice the public mind against us merely by reason of our being engaged in the wholesale liquor business.”   I have been unable to discover the outcome of this case but while there is no evidence Breen ever went to jail, it marked another rocky incident.

This whiskey man was born about 1866 in New York, the son of Thomas and Sarah (Byrne) Breen, both immigrants from Ireland.  Details of his early life and his eventual move to Chicago are not readily available.  Breen first surfaced in the Windy City in an 1891 city directory working as a cashier at 10 Wabash Avenue.  A year later, at 26 years old, Martin married a woman named Mary.   They would have one child, Julia.

By the late 1890s, Breen was in the wholesale liquor trade with a seemingly silent partner named Kennedy.  According to business records the pair had taken over the business from H. M. Wager who had been managing Farmer, Thompson & Co., whiskey wholesalers.  Breen was president of the firm and owned one-third of its stock.  Initially located at 187-189 Washington Street, the firm, apparently needing more space for its wholesale liquor sales moved to 128-1390 Franklin. 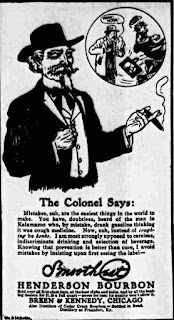 By this time, Breen & Kennedy were marketing their Henderson Whiskey over a broad area of the Midwest and beyond.  Using the slogan "Smooth whisky - good! Smooother whisky - better! Smoothest Henderson Bourbon - best!,” they were making the figure of their Kentucky colonel an icon in Chicago through a variety of ads featuring the bearded gentleman.  He often was portrayed telling a joke.  Sample from 1908:  “You have, doubtless, heard of the man in Kalamazoo who, by mistake, drank gasoline thinking it was cough medicine.  Now, suh, instead of coughing, he honks.”  As shown here, Breen’s Colonel had several looks. 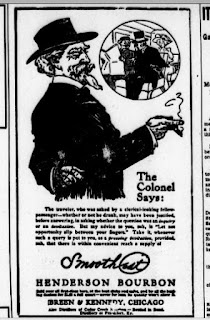 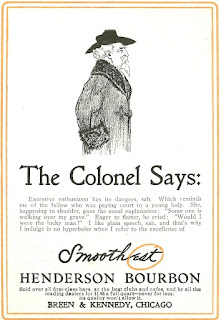 Like other rectifiers of the time, Breen & Kennedy claimed to be distillers, with a facility in Frankfort, Kentucky, a bogus assertion since the firm was buying its whiskey from various sources and blending it for proprietary brands like Henderson and Cedar Creek.  Like other wholesalers, the company also provided preferred customers with a range of giveaway items.  As shown here, paperweights and corkscrews were common gifts.

Despite the several challenges Breen had faced after opening his liquor house in Chicago, it proved to be a highly profitable operation.  Unfortunately, however, he had too few years to enjoy his wealth.  At the early age of 54 in April 1911, Breen died, leaving a wife and three-year-old daughter.   Available records do not reveal the cause.  Had his legal problems contributed to his early demise?

Breen was interred in Mount Carmel Cemetery, a burial ground located in the Chicago suburb of Hillside that holds the graves of Cardinal Bernardin and Al Capone, among others.  Located in Section R, Breen’s gravestone is laid in a grassy plot in the shadow of a large granite monument.  His widow, Mary, would join him there 24 years later.

Despite Martin’s passing, the firm of Breen & Kennedy continued to operate successfully until 1919.  Finally the same “dry” forces that had accused Breen of giving whiskey to children prevailed on the Nation to adopt a complete ban on sales of alcohol.  The liquor house shut down permanently.  For decades the name Henderson disappeared as a brand.  More recently, however,  Henderson has reemerged from a boutique distillery in Texas as a small batch, 80 proof American whiskey, the label shown here. 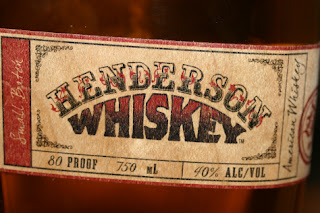 Posted by Jack Sullivan at 5:48 AM