Foreword:   Wherever a drinking establishment might be found, chances are the sounds of music would be cascading out the door.  In at least one case, as we shall see, the music had been created by the proprietor.  For others the music took several forms, including the formation of bands that achieved regional or local recognition.   This is the story of four “whiskey men” for whom music achieved unusual importance.

The son of a freed slave, Thomas “Million” Turpin learned the niceties of running a saloon from his father, “Honest John.”  Then Tom established the Rosebud Bar in St. Louis and made it the showplace for offbeat rhythms the world has come to know as “ragtime” music. 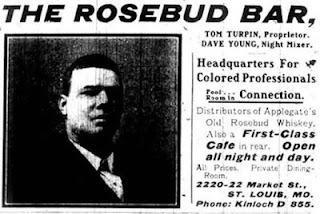 While working at his father’s St. Louis saloon, Tom began to entertain customers by playing the piano.  Largely self-taught since a boy, he had developed his own hard-thumping style that lent itself to the new syncopated rhythms that people were calling ragtime. 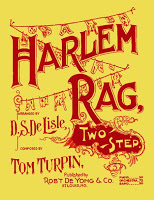 Turpin also was writing music in this idiom, in 1897 becoming not only the first published St. Louis ragtime composer, but the first black composer with a published rag.  Called the “Harlem Rag” it proved to be successful and was issued in several editions.  It gave the youth the money to strike out on his own.

In 1900 Tom opened the Rosebud Cafe at 2220-2222 Market Street near downtown St. Louis — destined to become a legend.  The saloon, shown here, soon became the gathering place for black pianists during the height of ragtime popularity, hosting such well-known composers as Scott Joplin, Joe Jordan and Louis Chauvin.  Tom Turpin himself often was the star entertainer.  As he got older, he carried three hundred pounds or more on his six-foot frame.  His large stomach made it difficult to see the keyboard so that he often played standing up in front of a raised piano, banging out ragtime tunes in an inimitable style. 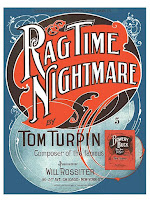 Turpin also continued to write music.  Afterissuing “Bowery Buck” in 1901, he composed “A Ragtime Nightmare,” a tune based on a work by a black playwright.  He followed that up with “Buffalo Rag.”  Although he composed a number of other ragtime pieces, these are the ones by which Tom Turpin is best remembered today. Turpin died in August 1922 at the relatively young age of 50, the cause of death listed as “peritonitis” from a rupture of the abdominal wall. 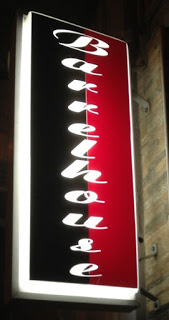 Although New Orleans was known for its tolerance, John Henry Oelkers ran the kind of saloon that was anathema to many in the city.  The New Orleans Times-Picayune in a page one story on Thursday, September 27, 1883, informed its readers that: “…Oelkers, the keeper of a negro barrel house …is a young German, who sells whisky to negroes at his barrel house.”  Oelkers would have been familiar with the sounds emanating from his drinking establishment on South Rampart Street, music many called “barrelhouse.” 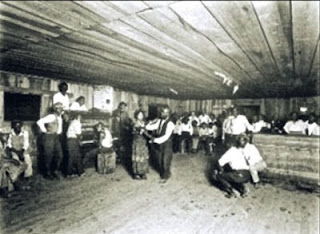 As indicated by the Times-Picayune story, Oelkers was running a particular type of New Orleans drinking establishment.  As  shown right, the wooden structure often was shed-like with a low ceiling and walls lined with barrels of whiskey and beer. Typically a piano stood on a raised platform in a corner of the room and much of the floor was open for dancing or other activities.  Often at the back of a barrel house were rooms where prostitutes to plied their trade.

Oelkers' and other barrel houses were contributing to the American music scene.  The vigorous and unpolished sounds coming from such saloons were making their mark on New Orleans and beyond.  Pounded out on a piano the music was characterized by an accented two-beat rhythm and became known as “barrelhouse” jazz. 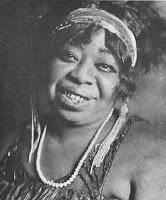 Through the “miracle” of recordings the music that began in saloons like Oeklers’ soon was being heard not just in New Orleans but across America.  Ma Rainey (1882-1936), shown here, was one of the first generation of blues singers to be heard on record.  Billed as “Mother of the Blues,” Rainey caught the barrel house wave, writing and recording “Barrel House Blues:” 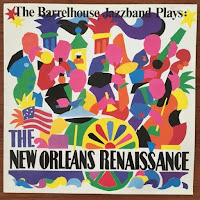 Although Oelker’s and  the other barrel houses eventually disappeared, the music that emerged from them remained vibrant and alive, even spreading worldwide in its appeal as contemporary audiences continued to value its rhythm and vigor. 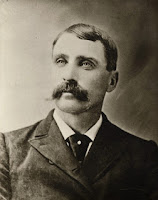 Dodge City, Kansas,  was known as the roughest, toughest, most lawless town in the West.  It was, that is, until Chalkley McArtor Beeson, shown left, came to run the famous Long Branch Saloon, shown below stayed to help bring law and order, and in the process organize a highly celebrated cowboy band that played at a Presidential inaugural. 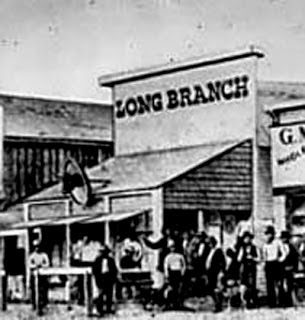 Called “Chalk” all his life, Beeson was born in Salem, Ohio, in 1848.  His early career aspiration apparently was to be a musician and it was said of him that he was so talented that he could play any instrument in the orchestra,  In 1868 at the age of 19 he left home and moved to Denver where he found employment driving a stagecoach and working with a group of musicians.  At the same time he was gaining a reputation for his ability with firearms, eventually becoming sheriff of Dodge and helping to tame it. 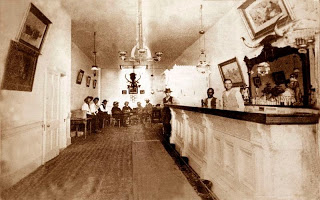 Throughout his time in Dodge, Beeson had not forgotten his music.  He first created a small orchestra to play at his Long Branch Saloon for the clientele as they drank, one in which he played violin. The interior is shown here.  In 1879 he organized the Dodge City Cow-Boy Band, a brass ensemble of men dressed in cowboy regalia and carrying six guns along with their instruments, as shown below.  Beeson appears to be sitting at the far right.  The band played nightly outside his saloon. 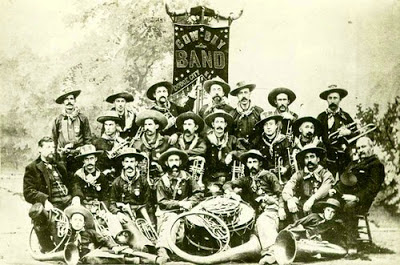 When in the summer of 1882 Beeson’s band received an invitation to enter a competition in Topeka, Dodge City cattle men, merchants and ordinary citizens came forward with funds to outfit the members and defray band travel expenses.  Organizers, however, disqualified the Dodge City musicians on the grounds that they were “professionals.”  But Chalk and his cowboys had the last laugh when the band was invited to Washington, D.C., in 1889 to march and play in the Presidential Inaugural parade for Benjamin Harrison.

Born in 1825, Luther Green King, shown left, was the fifth of John and Jemina’s King’s six sons. Upon his father’s death in 1858, he inherited an equal share in 217 acres, enough to begin a small farm. His father’s will also remanded to him and his brothers ownership of two slaves. Distilling may have been a natural step for Luther since he had manpower at his disposal and could easily buy rye grain from nearby growers. Along scenic Little Bennett Creek he built the only distillery ever known to exist in Montgomery County, Maryland, shown below.  King developed a thriving local business. 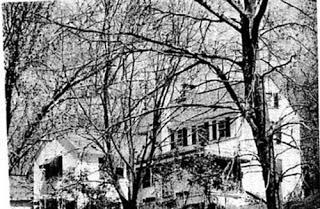 His first two wives having died, King at 74 married a 19-year-old great grandniece, Mary Lorena.  It was for her -- and probably at her strong urging -- Luther built the large new frame house he called “Trouble Enough Indeed.” We can speculate that this was a reference to problems of keeping a child bride happy.

Besides whiskey, the great passion in Luther King’s life was music. He lived at a time when many communities prided themselves on their brass band. Nearby Hyattstown bragged that its ensemble was “not to be excelled by any band in the county.” As a younger man Luther had learned to play the trombone and was a member of the Clarksburg Band. Subsequently he formed a musical group of his own called the Kings Valley Band. It included at least six other members of the extended King family.  A photo of the band taken in the early 1900s shows Luther, back row, fifth from left, clearly its oldest member. 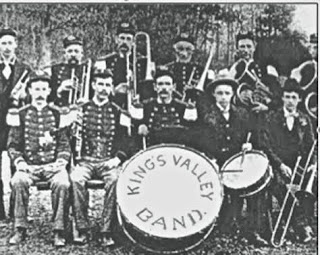 For whiskey men, music could be a way of expressing themselves, or simply to provide entertainment for their saloon crowd.  Music also provided solace from the stress of daily life, whether it was caused by racial issues or pistol waving gunslingers or a sulky young bride. 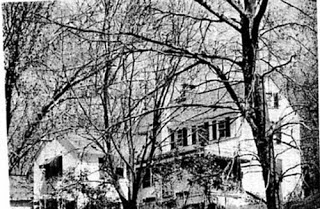 Posted by Jack Sullivan at 6:50 AM