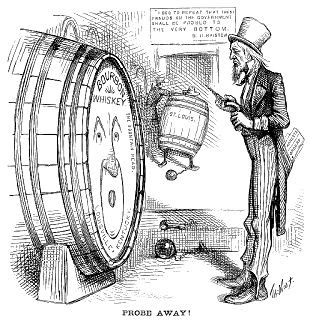 Foreword: The Whiskey Ring was a plot of the 1870s involving diversion of liquor tax revenues hatched in St. Louis but also organized in other cities. Distillers and liquor wholesalers paid off government officials, and those officials helped the distillers evade federal taxes on the whiskey they produced and sold.  The perpetrators stole millions. Secretary of the Treasury Bristow broke the politically powerful ring, using secret agents to conduct a series of raids across the country on May 10, 1875. Ultimately, 110 convictions were made and over $3 million in taxes were recovered. This post summarizes the story of four whiskey men whose lives were affected by their involvement with the Ring. 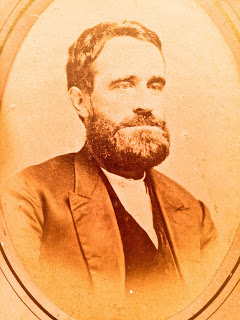 In 1872 Gordon Byron Bingham of Patoka, Indiana, patented an upright tank for holding liquor that he claimed was aimed at preventing “fraud on the revenue.”  Just three years later, as a distiller, Bingham, shown right, was implicated and convicted as a participant in the “Whiskey Ring,” whose sole purpose was to defraud the revenue.  As a result, Bingham ruined himself and the small town of Patoka was thrown “on the downgrade of the stream of time….” 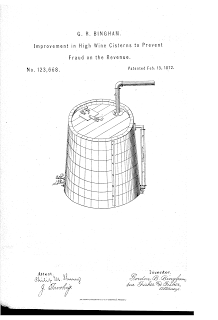 Shown right is the metal tank that Bingham patented in February 1872 to allow federal officers “…an easy means of determining at all times, the exact proof and quantity of the spirits within the tank.”   Ironically it was not long after receiving his patent that Bingham became entangled in “The Whiskey Ring” involving his distilleries in St. Louis and Patoka, near Evansville, Indiana.

After being caught in the Bristow raid,  Bingham initially attempted to stonewall judicial officials but faced with the threat of imprisonment for contempt of court he caved in, withdrawing his claim to his confiscated distillery and whiskey and pleading guilty to all government charges.  More important Gordon became the first and chief witness for the government against other Ring participants, including General James Veatch, the local collector of internal revenue.

Given a hero’s welcome upon his return to Patoka, a hamlet where he provided much of the income with his distillery, the press excoriated Bingham as a man who had committed “…the meanest, most rascally and most mischievous swindling ever practiced in this State.”  Disgraced, headed for jail, and seemingly beset on all sides,  Bingham within a matter of days was dead, passing on January 10, 1876, at the age of 49.  His obituary suggested that, faced with the prospect of the penitentiary, he developed "a form of mania" that rapidly undermined his health. 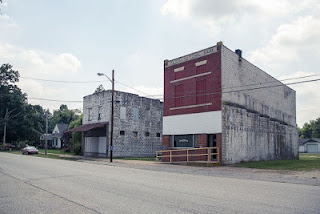 With its distillery gone, Patoka — an Indian name meaning “log on the bottom” — went into serious decline.  In the early 1880s the following was written about the town, shown here as it looks today:  “Distilleries first made her prosperous, then crooked whiskey sheared her golden locks, nipped her pristine vigor, made her prematurely gray and hurled her on the downgrade of the stream of time from which she is not likely soon to recover….” 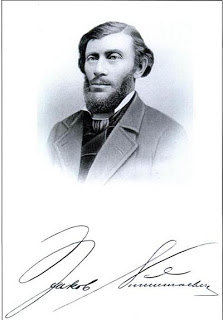 When he found that Chicago distillers who had joined the Ring were selling their whiskey much more cheaply than he could, Milwaukee’s Jacob Nunnemacher, a immigrant from Switzerland, soon figured out that the Chicagoans were not paying the tax but bribing the revenue agents sent to collect it.  Unwisely, Nunnemacher, shown right, joined them in the corrupt scheme.

As his bookkeeper put it later:  “He didn’t mind paying a fine now and then or a little protection money to the revenue agents and those higher up.  Everybody was doing it.”  Shown in an artist’s drawing below, Nunnemacher’s distillery was in a rural area south of Milwaukee called Town of Lake.  The site held his Italianate mansion, the whiskey-making plant, and pens for cattle who were being fattened on the spent mash from the distillery.

Caught in the 1875 raid, but loudly protesting his innocence,  Jacob demanded an early trial. That occurred in March of 1876.   The government claimed that he had conspired to manufacture and remove illicit spirits from the distillery.  Although found innocent of three charges, on a fourth, conspiracy to defraud the U.S. government,  Nunnemacher was convicted and sent to prison for six months. 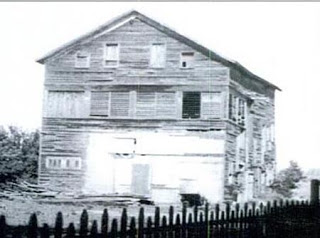 He spent only two months in jail.  Nunnemacher’s friends, influential Republicans, petitioned President Ulysses S. Grant for a pardon, which he swiftly granted.  Nevertheless, accord to contemporary accounts, the experience broke Jacob physically and mentally.  Only 57 years old, he died the same year as his release from prison. The distillery he founded also went out of business. The buildings were allowed to deteriorate, as one shown here, and ultimately were razed.

John H. Garnhart was a whiskey man and inventor whose most intense and enduring activity, however, may have been re-inventing himself, changing occupations and locations frequently, and known by at least three names during a foreshortened lifetime of only fifty years.  This talent helped him escape the fates of Bingham and Nunnemacher. 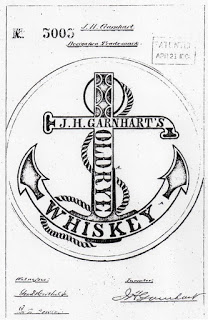 Beginning in 1859 after a move from Denver.  Garnhart was hip deep in the St. Louis liquor trade.  He marketed a highly alcoholic bitters product and patented the bottle, shown right. In 1868 he trademarked a label for a brand of whiskey bearing his name.  Shown here, the anchor design almost certainly was his personal handiwork. 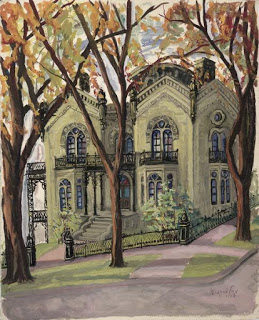 Seemingly always operating on the edge of propriety Garnhart has been linked with the Whiskey Ring but early on in the conspiracy seems to have sensed that things might go wrong.  He brought in two partners to run his liquor company and gave them full responsibility for its management and finances.  Then he moved to Madison, Wisconsin, living in a mansion home shown in an artist’s rending here.  There he marketed a reaper he had invented, a venture than eventually failed.   In 1874, after a short illness, Garnhart died.

His death may have saved him from a prison term or at least profound embarrassment.  A month later, a new Secretary of Treasury, Benjamin Bristow, took office who set the trap for the St. Louis racketeers and sprang it in May, 1875.  Garnhart’s company was among those where barrels of illicit whiskey and office ledgers were seized.  The two men then operating it were among those arrested in the raid.  Convicted, they were slapped with a large fine and a prison term of one year in the Cole County, Missouri, jail. 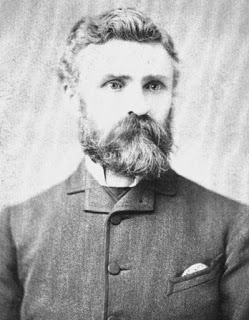 The name George T. Stagg on a bottle of whiskey for many years has been a familiar sight in virtually every liquor store in America.  Beyond the name and the brand was a Kentucky-born man, shown here, whose life might be characterized as having achieved his fame amidst a series of trials that he not only surmounted but that actually contributed to his rise to wealth and fame.  Among them was his “blowing the whistle” on the Whiskey Ring.

In the aftermath of the Civil War, Stagg moved with his growing family to St. Louis, where the pre-war shoe salesman met a wealthy local businessman named James Gregory.  Gregory was impressed with the 30-something’s highly-developed sense of organization, meticulousness in keeping records, and leadership qualities.  Together they established a firm they called “Gregory & Stagg, Commercial Merchants and Distillers Agents.”  It meant that Stagg was busy selling Kentucky whiskey in markets throughout the United States. 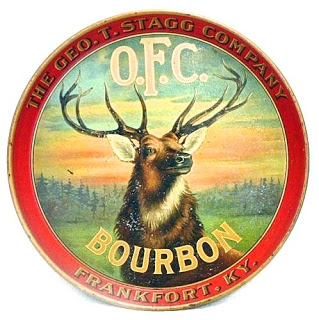 Stagg’s work brought him in contact with distillers and whiskey rectifiers of St. Louis and other Midwest cities, some of whom were participating in the Whiskey Ring.  He quickly became aware of the scheme and its defrauding of the Federal government of its liquor tax revenues.  Instead of collaborating with the Ring, he alerted honest officials about what was going on and helped precipitate the 1875 raids.

Like many “whistle-blowers”  Stagg himself came under scrutiny from individuals skeptical about his motives, particularly Republicans allied with the Grant Administration.   A suspicious House of Representatives Committee in May 1876 held extensive hearings on the scandal.  An Federal Internal Revenue officer was questioned extensively about Stagg’s role in the affair, with the implication that the whiskey salesman might have been in cahoots with the culprits. 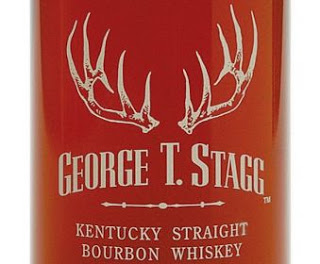 The officer, Elverton R. Chapman, vehemently fended off those innuendoes, testifying that Stagg had tipped him off about illegal whiskey being dumped in a local warehouse and then shipped to New Orleans, and, moreover, had told him whom to call as witnesses.  Chapman asserted:  “The most valuable assistance that we got in St. Louis was from Mr. George T. Stagg, of the firm of Gregory & Stagg,, commission-merchants in St. Louis.  Mr. Stagg is entitled to more credit for the exposure of the St. Louis whiskey ring than any other man that lives.”  This ringing endorsement not only fended off Congressional criticism, it marked another rung in the Stagg’s climb toward whiskey fame. 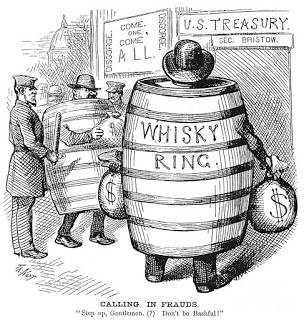 The Whiskey Ring offered the same choices to each of the four men profiled here.  Bingham and Nunnemacher chose to play ball with the criminals and it cost them both dearly.  While apparently profiting from the fraud Garnhart sidestepped the scheme and, after his death, others “look the rap.”  In contrast to those three, Stagg stood up for honest dealing and helped to bring down the perpetrators.  It helped earn him an honored place in whiskey history. To quote “The Shadow” of radio fame:  “The weed of crime bears bitter fruit.  Crime does not pay.”