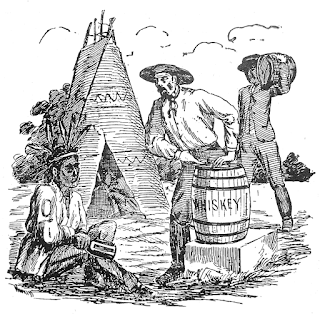 Believing that anything alcoholic should be banned from Indian territories to prevent crime and social disintegration,  U.S. Indian Affairs officials during the 19th Century had to deal with men like George Buente, owner of a St. Louis shipping company whose principal trade was illicitly selling whiskey on reservations.  Buente ultimately became the U.S. “poster boy” for the greed of American citizens prospering from the sale of “firewater.”

The official Government view was expressed in an 1833 report by the Commissioner of Indian Affairs to Congress:   “The proneness of the Indian to the excessive use of ardent spirits with the too great facility of indulging that fatal propensity through the cupidity of our own citizens, not only impedes the progress of civilization, but tends inevitably to the degradation, misery, and extinction of the aboriginal race.” 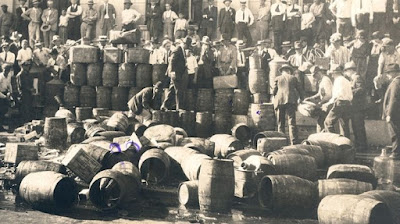 Efforts to curb the whiskey trade by declaring all reservations “dry” did little good. During July 1889, for example, federal agents reported destroying 5,000 gallons of intoxicating liquor on Indian lands.  During the late 1800s on one ostensibly “dry” reservation, 95 percent of crimes — including murders, assaults, and robberies — were laid to intoxication,  Native American leaders also recognized problems with alcohol but saw the evil located not in the nature of the Indian but in the character of whites who brought it into Indian communities.  That introduces George Buente.

Despite his Hispanic sounding surname, Buente was a German, born in Prussia about 1839.  Details about his early life and arrival in the United States are scanty.   The earliest listing I can find for him in St. Louis is 1872 when he was listed as a grocer at 938 and 940 Broadway.  In 1874 he returned to Prussia where he found a bride in 26-year-old Augusta, a women eleven years his junior and brought her back to the U.S.  In quick succession they had three children.

A clue to Buente’s character may be Augusta’s petition for divorce in 1881 after seven years of marriage.  During the three preceding years, according to her allegations, her husband whipped and maltreated her on many occasions, beating her with his fists, throwing her violently against the wall and striking her while she was pregnant.  She further alleged that Buente frequently taunted her with a description of his illicit amours.  Her divorce petition stated:  “She bore this treatment until it became intolerable, and was at length compelled to appeal to the court for relief.”  Augusta sought custody of their children and considerable alimony, noting Buente’s lucrative grocery business and real estate holdings.

About the time of the divorce Buente also opened a second business, one he called Geo. Buente Shipping Company.   This enterprise presumably was involved in shipping west a wide variety of items, using the St. Louis, Iron Mountain & Southern Railway, as well as other railroads that made that city a transportation hub. 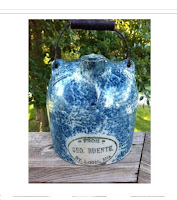 Buente’s emphasis on liquor emerges from the varieties of whiskey jugs found with his  labels and the slogan “Goodness Corked Up.”  The jugs and shot glasses found with his logo and “Cabinet Bourbon” on them indicate that Buente also was a wholesale liquor dealer, likely blending his own proprietary brands. Buente found a ready market for his wares in the Indian Territory.  This originally was a large chunk of land in the center of North America that the government had reserved for the forced resettlement of Native Americans.  Over time, the Indian Territory had been whittled down by Congress to what is now the State of Oklahoma.   Then an 1890 Act of Congress further shrunk the area to the eastern portion bordering Kansas and Missouri while the remaining western portion became Oklahoma Territory, open to settlement by whites.

Although under the jurisdiction of federal laws that declared Indian Territory “dry,” the traffic in liquor there was a continuous flow.  Buente was described by the Commissioner of Indian Affairs T. J. Morgan as “one of the largest whiskey shippers doing business in the Territory.”   The middle men were Indian traders, mainly white men who were authorized to buy and sell on Native American lands.   Their licenses ostensibly were based on “dealing fairly and honestly with the Indians, exercising a wholesome influence on them, and observing the regulations prescribed…,” including those on alcohol. 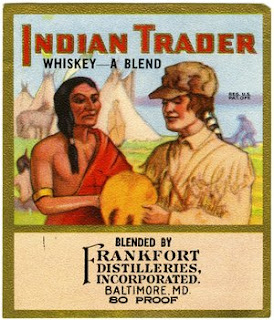 More than a few traders fell short of those ideals.  They would order merchandise to be shipped by men like Buente in boxes or barrels marked to contain innocuous items like cooking pans and clothes pins, but bearing whiskey and other alcohol.  Those beverages would then clandestinely be sold to Indians by the traders, resulting, Commissioner Morgan said, in “destruction, ruin and death.”  It is ironic that later the Frankfort Distillery would name one of its whiskeys brands “Indian Trader.”

Commissioner Morgan claimed that the Indian Territory police force, made up of natives, had learned to scrutinize carefully Buente’s shipments into Indian Territory:  “…And few there were that did not contain a liberal allowance of whiskey,” he reported. Yet it appears Buente did not face legal sanctions until one particular 1889 shipment to the town of Atoka, the chief city of Atoka County and a stop on the Missouri-Kansas-Texas (MKT) Railroad, the name of the southern branch of the Union Pacific.  Shown below, Atoka was originally a Choctaw town and home base of many Indian traders. 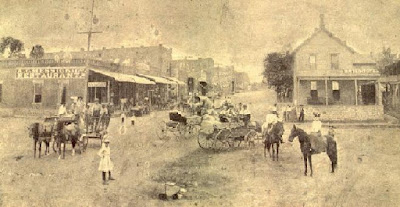 Buente’s wooden cask carried a label claiming it contained “Queensware,” a type of British-produced crockery.  Suspicious, police seized it upon arrival in Atoka, pried the cask open and inside found sufficient liquor and materiel to outfit a saloon, according to Morgan.  Buente was arrested and brought before a federal court.  He feigned ignorance of the law but nonetheless pled guilty to the charges.  He was fined $500 (equivalent to more than $12,000 today) and court costs.   Whether these events were enough to discourage him from sending liquor into Indian Territory again is unclear. 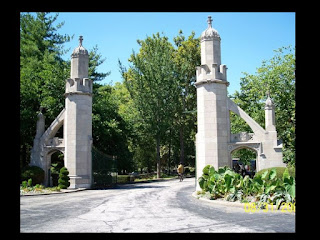 Six years after his conviction, while still active in business, George Buente died at the age of fifty.  He was interred in St. Peter’s Cemetery, shown here, a burying ground located in Normandy, St. Louis County.   To date no photograph of the the gravestone has emerged.  My imagination suggests an appropriate memorial using the words of Commissioner Morgan who may have had George Buente in mind when he said:  “The whiskey traffic is the most pernicious of all evils….”