Known as “Jim Crow” laws, Mississippi began to roll back the anti-racist laws of post-Civil War Reconstruction in 1880, just as Nathan C. Cannon, an African-American, was growing into manhood and a career as a liquor dealer in Vicksburg.  Despite the imposition of segregation, Cannon managed to prosper until his untimely early death cast his wife and son to fend for themselves.

In order to insure his election, President Rutherford B. Hayes in 1877 promised Southern white politicians to end Reconstruction that had seen blacks participating in political life and repealing pre-conflict racist laws. It did not take
Mississippi long to respond.  By the time Cannon reached 12 in 1878 it had become against the law to teach white and black children in the same school.  In 1880, marriage between the race was banned.  That was followed by enforced segregation on streetcars and railroads and at hospitals, waiting rooms, and public lavatories. 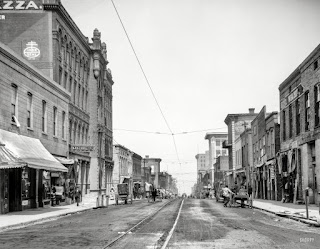 Although details of Cannon’s early life are sketchy, census records indicate that he was born in Georgia and migrated to Vicksburg at an early age.  He showed up first in city directories in 1906, running a saloon at 309 Washington Street, a major Vicksburg commercial avenue, shown above.  By this time Nathan, by now in his thirties, was married.  His wife was Minnie, a native Mississippian who was about nineteen when they wed in 1902.  Their union produced one son, born in 1903.  They named him Nathan Jr.

A 1906 Vicksburg street directory seems to indicate the irony that although blacks were being discriminated against in public facilities, the private business sector still permitted Negro-owned enterprises in predominantly white commercial blocks.  Cannon’s Washington Street address put him between Harry Speyerer’s meat market and Barkin Bros. shoe store, both apparently owned by whites.  Moreover, the saloon was located immediately across the street from C. J. Miller’s saloon, also white.  [See my post of November 26, 2014, on Miller]. 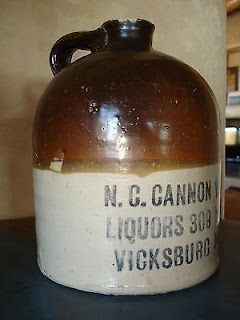 Like Miller, Cannon also was selling his liquor at retail from his saloon, using pottery jugs made in the vicinity of the city.   Shown throughout this post, the ceramics were somewhat crudely made.   In sizes from quarts to half-gallons and gallons, they featured a “beehive” design with an Bristol glaze body and an Albany slip top and handle.  Cannon’s name and address appears on them all.  He advertised “Jug trade a specialty.”

Circumstantial evidence exists that Cannon was selling whiskey to whites as well as blacks.  The advertising notebook shown right provides the clue.  Note that the cover states: “We have a reputation for prompt attention to mail orders”…and…”Send us your Mail Orders.”  The notebook contains the jottings of Mary Ratliff, the young daughter of a white farmer in Smedes, Mississippi, a hamlet about 30 miles north of Vicksburg.  Since Mary was too young to order whiskey, we can assume Cannon sent the item to her father as part of a mail order liquor shipment. 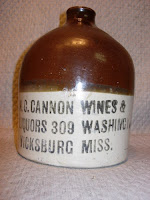 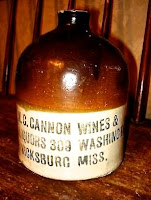 The notebook contains a page that lists Cannon’s liquor offerings.  They included at least two proprietary brands, “Cannon’s Favorite” at $2.00 a gallon and “Cannon’s Select Rye.”  This suggests that he was buying product from Kentucky, Pennsylvania, and elsewhere by the barrel and then decanting it into his own labeled containers.  He also featured nationally known brands including “O.F.C. Taylor,” “Anderson Rye,” and “Nelson County.” 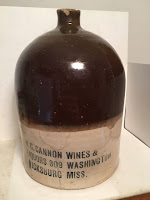 Cannon’s success in the liquor trade did not go unnoticed in Vicksburg’s black community.  Although he was not involved in Republican politics like his fellow black saloonkeeper,  Jere Blowe [see my post on Blowe, April 6, 2013],  he was active in community affairs. One of Cannon’s efforts was the formation of a local chapter of a black insurance cooperative known as the “Benevolent Industrial Assn.”  One of 75 chapters in Mississippi, the Vicksburg unit claimed 4,800 members.  Cannon was elected as treasurer of the organization.

Within three years, whatever death insurance Cannon had, his wife was collecting.  At the untimely age of 40, he died in 1909, leaving Minnie with a thirteen-year -old girl named Etta that the couple had adopted, and their son, Nathan Jr., now seven.  Ten months after Cannon’s death, the State of Mississippi went “dry,” banning completely the manufacture or sale of alcoholic drink.  It rendered worthless the liquor business Nathan had left behind.  Fortunately Minnie had sufficient education to find employment as a teacher in a black Vicksburg public school, a profession she pursued for many years. 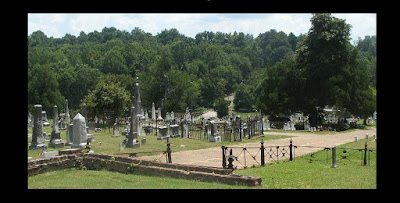 Minnie Cannon lived 34 years as a widow before dying in 1943.  She was buried with Nathan in Division D, a black section of Vicksburg’s Cedar Hill Cemetery.  Their gravestones, shown here, lie next to each other.  For me the couple symbolize Mississippians who saw their civic rights whittled away one by one and yet persevered in the Jim Crow era to build a family and a business, both seemingly successful.   Moreover, we have the whiskey jugs as a continual reminder of their indomitable spirit.

Posted by Jack Sullivan at 7:15 AM