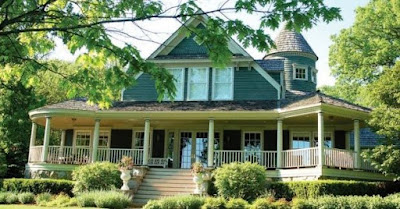 John S. Cooke, an Irish cobbler’s son, found success in Chicago selling liquor and beer.  An entrepreneur extraordinary,  with the proceeds from his enterprises  he funded the design and construction of a summer home on Lake Geneva, Wisconsin, shown above, that has been called “a tour de force of the Shingle Style.”  He called it “Ara Glen” after a scenic spot a few miles from his 1837 birthplace in County Cork.

Cooke’s early circumstances were better than many in impoverished Ireland.  His shoemaker father was fairly well off, owning property in the town of Glenwood.  His mother, Mary, was from the well-known Clancy clan in County Cork.  Despite a desultory education, as one writer has put it:  “Cooke at 14 was energetic, ambitious and a a little better off (and better shod) than his peers.”   These attributes soon propelled him to try his fortunes in the United States.

After two years of working at menial jobs in New York City, in 1857 Cooke determined to move west and chose to settle in Chicago .  Having apprenticed as a baker in Ireland, he readily obtained employment in that trade but found the pay low compared to sailing the Great Lakes as a seaman and working on construction.  Cooke cut an imposing figure at six feet, one and one half inches, muscular, regular features, dark brown eyes, and a shock of brown hair that eventually turned gray. 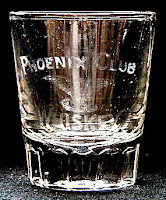 During the Civil War he went to work for a fellow Irishman named Michael Keeley who was a Chicago soda and mineral water bottler.  After working with Keeley for five years, he joined a wholesale liquor and wine firm called Schwab, McQuaid, and Monheimer,  He stayed for fourteen years as a traveling salesman, buying into the company over time.  With the departure of other partners by 1881, the business became Monheimer & Cooke.  Located on Randolph Street, the company used the brand names:  "Edgebrook", "Phoenix ", and "Phoenix Club.”

In the meantime Cooke had married in 1863.  His wife was Charlotte Rowland, originally of Rochester, New York, a woman of Irish ancestry who was eight years John’s junior.   The 1880 census found the family with four children.  The first three were boys, Charles, George and John; the fourth a girl, Irene.  Cook’s 81-year-old father, a widower who had emigrated from Ireland, was living with them.

As an indication of his respect in the liquor industry, Cook was elected in 1882 and again in 1884 as the president of the Bohemian Liquor Dealers Association, an Illinois group involved in assisting political candidates who favored the saloon trade.  They vetted candidates, mostly Democrats, and contributed to the local party organization.  Cook himself later would run on the Democratic ticket for treasurer of Chicago.  Although the Chicago Eagle claimed he “had proven a tower of strength to the ticket,” he lost and never again sought public office. 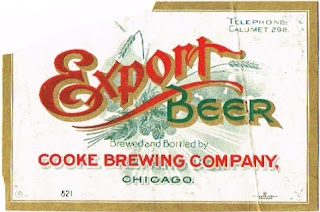 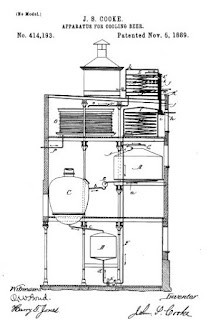 Several years after buying into the liquor house, Cooke made a move into brewing, in 1885 buying out the Union Brewing Co.(UBC), a Chicago brewery established in 1867.  UBC had been struggling, selling its beer through street carts at the rate of about two barrels a day.  With no regular customer base, UBC was hard pressed to complete with the bigger, more established local breweries.  Cooke subsequently changed its name to the Cooke Brewing Company and expanded the operation.  He also invented and patented a new device for cooling beer, equipment that added efficiency and speed to the process.

By 1900, Cooke was selling 190,000 barrels of
beer a year.  This was a notable achievement since at that time most Chicago breweries had exclusive hold on “house” saloons.  Cooke was an independent brewer bucking the trend and resisting the blandishments of larger beer-makers to merge with their combines. Nonetheless, according to observers, he was making “tidy profits” on his beer.

Now Cook was ready for new challenges.  The opportunity came in the form of a former “dry” hotel on the shores of Lake Geneva in Southeastern Wisconsin called the Pishcotaqua, at the time among the largest hotels in the Midwest.  No alcohol meant sparse customers, however, and the hotel had been through four owners and foreclosure when Cooke bought it.  The hotel went “wet” under his guidance and he changed its name to the Cooke Parke Villa Hotel.   He bought a steam yacht for his guests to ride there on the large lake from William Bay where the trains from Chicago arrived.  Occupancy grew and for a time the hotel made money. 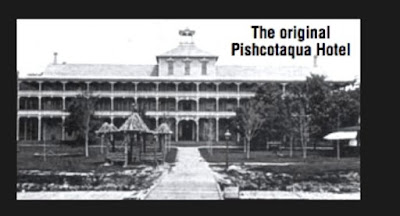 Fire proved a bane.  In 1891 an errant cigar smoker set fire to some of the  outbuildings that Cooke quickly repaired.  The following year, however, a more serious blaze ruined a major portion of the hotel, causing him to quit the hospitality business.  At the same time, however, Cooke had become enamored of Lake Geneva and decided to build a summer home for his family there. He commissioned an architect to turn the hotel’s free-standing billiards hall, which had survived the fire, into a summer residence for his family.

The result was a home of more than usual interest.  It was given Victorian elements such as wide verandas, turrets, and significantly the use of wood — thousands and thousands of shingles.  At the same time the house abandoned the Victorian boxy look in favor of a plentitude of angles that make it stand out architecturally.  Cooke called it Ara Glen.  Today it is listed on the National Register of Historical Places. But the entrepreneur in Cooke was not finished.  At the age of 60, in 1897 he started a mineral water business, buying supplies from springs in Wawatosa, Wisconsin, and Quincy, Illinois.  He called it Diuretin Mineral Water and claimed it was a remedy for Bright’s Disease, kidney troubles, dyspepsia and indigestion.  Headquartered in Chicago, he named the enterprise the Ara-Glen Mineral Water Bottlng Company.

But Cooke had limited time to enjoy his Ara Glen home. On March 5, 1899 he was stricken with a heart attack while he was attending Mass at Chicago’s St. James Catholic Church.  He lingered for a week, gradually failing, and died at his residence at 2976 Michigan Avenue.   He was buried at Calvary Cemetery in suburban Evanston, Illinois; his monument is shown here. 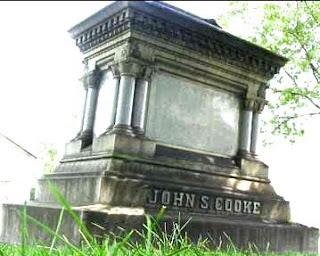 After his death his sons George and Charles took over the family businesses. His estate with its many facets proved to be a legal tangle and the family feuded over it, generating several court actions.   Cooke’s liquor house disappeared from Chicago directories after 1910.  The brewery goes unrecorded after that same year.  The house was among the disputed assets and was split among family members.  By 1925 they had sold it to a family that has maintained it to this day.

For a final word on John Cooke, one only need go to an 1897 commentary that appeared in the “Biographical History of the Irish in Chicago,” edited by Charles Ffrench.  There Cooke is characterized as: “Fearless and energetic, gifted with a most wonderful power of perseverance, entirely unrecognisive of defeat, he has surmounted innumerable difficulties, from a poor lad, whose only capital was his rich business endowments and unimpeachable integrity….” 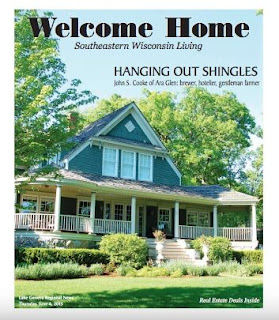 Note:  As I was doing my research on this post I was fortunate to come across article by Jessica Franzene that appeared in the June 2013 issue of “Welcome Home, Southeastern Wisconsin Living,” that featured her cover story on John S. Cook and Ara Glen.  As a result I was able to bring the story up to the present time when the house Cooke built still is used as a family residence.  The article is a reminder that as along as Ara Glen stands, the memory and achievements of John S. Cooke will be with us.