Railroads were a distinct boon to the American liquor industry.   They allowed distillers to bring grain and other supplies virtually to their doorstep, distributors to obtain whiskey supplies from far away places, and dealers to specialize in mail order sales.   James Dowd McNeely of St. Joseph, Missouri, was a liquor wholesaler who took railroads a giant step further — he helped build them. 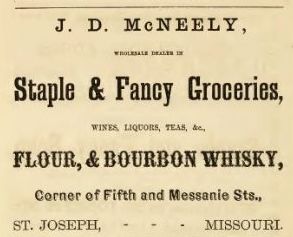 Nothing in McNeely’s early years indicated his abilities in the transportation sector.  He was born in Ireland in April 1831 and came to the United States as a youth, in 1855 settling in St. Joseph, Missouri, a “jumping off” place for settlers heading west.  Warned about the unlikely prospect of resupplying along the way,  they often bought their provisions for the journey in St. Joseph. 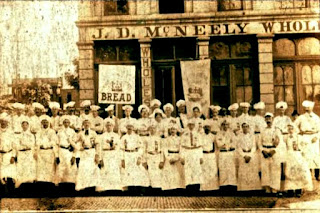 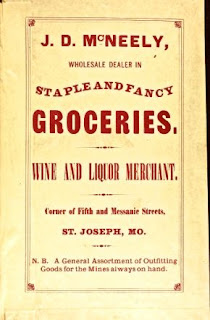 Sensing an opportunity, McNeely opened a wholesale grocery that provided, he advertised, both “staple and fancy groceries” to retail grocers and trail suppliers that served the populace on their way West.  He also advertised as always having on hand “a general assortment of outfitting goods for the mines.”  His enterprise thrived.  The 1870 census set his total worth at $40,000, equivalent today to almost $1 million.  The above photograph of McNeely’s store at the corner of  Fifth and Messanie Streets shows a staff of at least thirty-five. 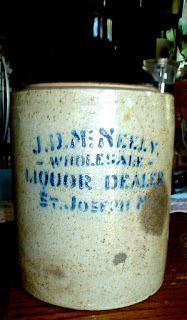 Key commodities for McNeely were wines and liquors.  He was importing them to St. Joseph in barrels from a variety of sources and then decanting them into smaller containers of ceramic and glass.  Shown here is a large stoneware jug, likely holding three gallons of whiskey on which J. D. McNeely is identified as a wholesale liquor dealer.  Those would have been provided to saloons and stores that would in turn sell the contents in smaller quantities.  He also provided customers with liquor and wine in embossed glass jugs, as shown below. 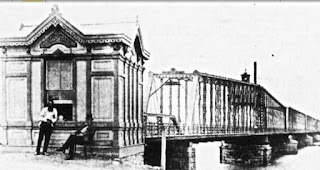 McNeely’s commercial success propelled him into the top ranks of St. Joseph business circles. In 1871 he reportedly was chosen as one of the thirteen board of directors of the St. Joseph Bridge Building Company  for constructing the city’s first railroad bridge across the Missouri River.  Completed in May 1873 the original bridge had six piers and a total length of 1,345 feet.  A St. Joseph & Denver City train was the first to cross.  The span was a toll bridge, the cost of construction and maintenance offset by payments from the railroads.  Shown above is an early photo of the Missouri River bridge with its elegant tollhouse. 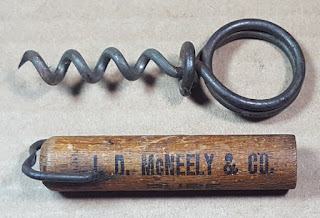 Experience on this project may have sparked McNeely’s interest in expanding from groceries and liquor into railroading.  St. Joseph was a rail hub with as many as twenty-one lines serving the city.  A fever to create additional railroads gripped the region.  In 1877 McNeely joined a group of businessmen in creating a new line called the St. Joseph and Des Moines Railroad.  The whiskey man and grocer appears to have been a leader in the construction process for this railway. 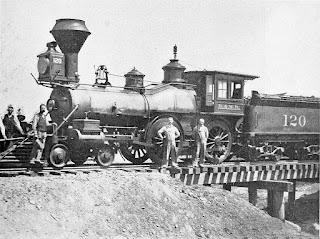 While information about the line is scanty, the company operated for 24 years before being swallowed up in January 1901 into the giant Burlington Railroad that eventually amalgamated some 173 separate rail corporations.  Shown here is a Burlington engine of the era.

By this time, McNeeley, identified as a “railroad contractor” by The Railway Age, a trade paper, also had been working with the Chicago, Kansas & Nebraska Railway Company.  That line had been formed in 1885 with a $25 million loan from the Chicago, Rock Island & Pacific Railroad in exchange for nearly all of the CK&N’s stock.  With McNeeley’s assistance the line had put down 1,388 miles of track by 1888 but failed to make its interest payments to the CRI&P and was taken over in June 1891. 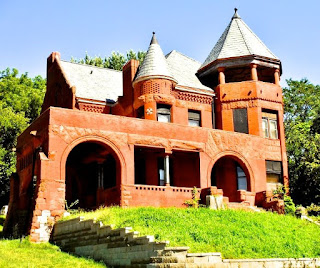 Throughout this period McNeeley continued to sell liquor and groceries at his store.  His wealth now grown considerably, in 1890 he commissioned a local architectural firm to construct a mansion home for Ellen and his children.  Situated on a steep slope below the ridge line of the Missouri River bluffs, the house, shown above, was multiple-gabled with a slate roof.  Made largely of red sandstone, it resembled a medieval castle with its towers.  Below the towers is a massive front porch with two entrances, the one at left large enough to allow a horse and carriage to enter. 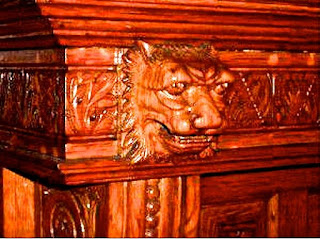 The interior was equally extravagant, featuring eight elegant fireplaces of unusual designs adorned with polycromed tiles and carved lintels with lions and other motifs.  One can imagine the excitement of the McNeelys as they moved into these palatial surroundings.  Family members would occupy the house for a half century before selling it.  Later it functioned as a retirement home. 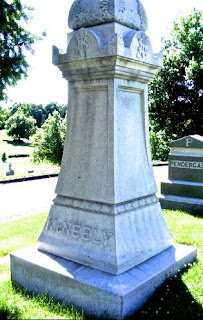 James McNeely unfortunately had less than a decade to enjoy his mansion.  In August 1899 at the age of 68,  he suddenly died there. According to a local newspaper McNeely’s passing “shocked” many of his fellow citizens since he was not known to be ill.  He was buried in St. Joseph’s Mount Olivet Cemetery at the imposing monument shown here.   An obituary noted that McNeely had amassed a fortune in the mercantile business and contracting but did not mention his liquor sales.  Instead it asserted:  “He was one of the most prominent railroad builders in the west.”

Note:  While I have been able to document several instances of James McNeely’s involvement with railroads, the obituary statement above suggests that there is more to be known.  My hope is that a descendant will read this post and be able to provide more information about McNeely’s role in railway expansion in Missouri and beyond.

Posted by Jack Sullivan at 8:53 AM