Levy & Lewin: The Humanitarian and the Impresario

In 1859, a time of significant unrest in Germany, two Jewish boys, Lesser Levy and Albert Lewin, were born.  Each emigrated to the United States, settling in Denver where their fortunes would intertwine in a liquor business known as the Levy & Lewin Mercantile Company.  With diverging personal interests, each man earned a measure of local fame:  One was recognized as a humanitarian; the other, as a showman.

The early history of both men is shrouded in time.  Levy was just a baby when he was brought to America by his parents.  By the time he was 21, he was living in Denver where he became a naturalized citizen.  Lewin’s origins are even more opaque.  The two men may have been related by blood or marriage.  I assume each served some time employed in one of the established saloons or liquor stores in Colorado. 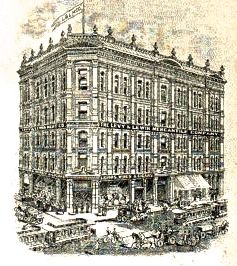 The duo surfaced with their mercantile enterprise about 1897, located at 1322-1326 Seventeenth Street.  Lesser Levy was president;  Albert Lewin was secretary-treasurer.  Within a short time, apparently needing more space for their operation, they moved to the large building shown here on the corner of Sixteenth and Larimer Streets, the latter one of Denver’s iconic avenues.

The partners’ facilities were large enough to permit them to buy whiskey by the barrel from distillers located a distance away and transport it to Denver via the several railroads serving the city.  Then they emptied the barrels into ceramic jugs for sale to local retail outlets like saloons and restaurants.  Some carried the message “Yours Money’s Worth.”  Other jugs warned against reusing the jug, reuse being a common practice to mislead the public about the contents. 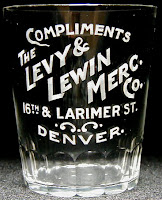 Information is scant on Levy’s personal life.  There is no record of marriage to be found.  When he applied for a passport in 1890, however, his physical description  at 31 years was recorded.  He was a only five feet - five inches tall, with dark blonde hair, brown eyes and a round face.   Lewin, by contrast, had married about 1884, when he was 25 years old.  His wife, Mary, also was a German immigrant.  The couple would have nine children, seven daughters and two sons.  The 1910 census found the family living in Denver’s Tenth Ward with Mary’s mother, Johanna Levy, a housemaid and a cook. The two men also were linked in their joint ownership of the Little Ellen Gold Mine, located in Leadville Colorado, a hundred miles northeast of Denver.  Levy was president of the company and Lewin, secretary-treasurer.  In 1896 the Colorado  Commissioner of Mines put the value of their mine at the equivalent today of $25 million.  Although the business interests of the two men indicates their closeness, they differed sharply in their outside interests. 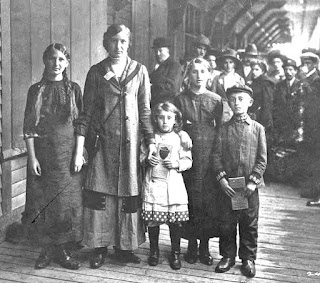 In 1899 a wave of Romanian Jews, victims of harsh laws, fled to New York.  The U.S. Jewish community immediately made efforts to aid these refugees settle into American society, find them employment, and disperse them to other parts of the country to relieve the burden on East Coast relief agencies. Obviously moved by pictures of the homeless Romanians, Lesser Levy served as the chairman and leader of the Denver relief organization from 1901 to 1907.  In this way he helped re-settle 2,791 Jewish refugees in Colorado. 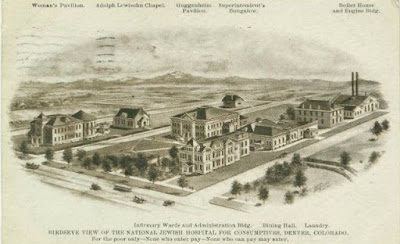 Levy also volunteered for the Local Board of Managers for the National Jewish Hospital for Consumptives in Denver.  The need was felt for such a hospital where the mile high altitude and clear air was seen as therapeutic for those suffering from tuberculosis.  At the time, no medical institution in Denver would admit penniless consumptives, and many poor victims of the disease lived and died on the city's streets. Organized in 1890, the hospital project took nine years to realize.  Financial support came nationwide and some of Denver’s best physicians donated their services.  Patients arrived from all across the country, many of them non-Jews.  The hospital motto, as shown on the postcard view above, was:  “For the poor only—None who enter pay—None who can pay may enter.”   Levy was among those welcoming the first patients.

Albert Lewin’s interests took a different direction.  In March 1907 he joined a group of investors that incorporated the Lakeside Realty and Amusement Company to create a large amusement park adjacent to Denver.  Managed by Lewin, Lakeside also incorporated as a municipality in order to be free of Denver’s restrictive laws on the sale and serving of alcohol.  An employee of Levy & Lewin Mercantile was elected mayor.

Lewin became a darling of the Denver press.   When the 100,000 lights in the park were turned on for a test, the whiskey man was quoted.  The Denver Republican also reported that Lewin had successfully tested the motors on all the park rides.  When the park opened the same paper declared that the Lakeside management had given the people of Colorado “the greatest and finest amusement park ever attempted West of Chicago.”  Shown above, it was, indeed, a spectacular scene. 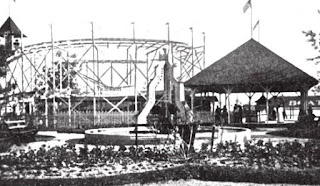 Two years after his success at Lakeside, Lewin looked for a new challenge.  He found it in an earlier amusement park built west of the Mississippi River near Denver. It was called Manhattan Beach.  After it burned in 1908, Lewin headed an investment group that rebuilt it, adding a roller coaster, shown here, an over-the-water dance pavilion, and new theater.  Renamed “Luna Park,”  venture was not as successful as Lakeside. 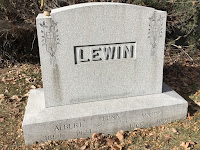 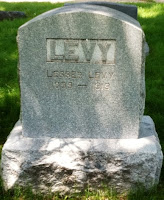 As the 20th Century moved on, the forces of Prohibition made themselves felt in Colorado.  The state banned alcohol production and sales in 1916, four years before National Prohibition.  Even before the ban, Levy and Lewin had shut down their liquor mercantile as they pursued their separate interests.  Lesser Levy died in 1919 at the age of 60.  Albert Levin lived to see National Prohibition enacted dying in 1924, at age 65.  Both men are buried in Congregation Emanuel Cemetery in Fairmount, Colorado, adjacent to Denver.  Their gravestones are shown here.

Born the same year in the same country and with their careers in the liquor business closely intertwined, each partner left his mark quite differently in Colorado.  Levy’s reputation was as a humanitarian whose work toward creating a tuberculosis hospital benefited thousands of patients. Today it is considered one of the Nation’s leading pulmonary medical facilities.  Lewin is remembered as the impresario and showman who created Lakeside Amusement Park. For over a century Lakeside has remained a favorite place of relaxation and enjoyment for generations of Coloradans.

Posted by Jack Sullivan at 8:59 AM