Today in the San Pedro district of Los Angeles a central open space, shown below, is designated Pepper Tree Plaza.  A metal plaque there identifies one spot as the former site of the Pepper Tree Saloon, a sometimes rowdy drinking establishment whose history paralleled that of the community.  The saloon flourished under the aegis of three California publicans, Gustav Falk, John Goudie, and Caspar Mckelvy. 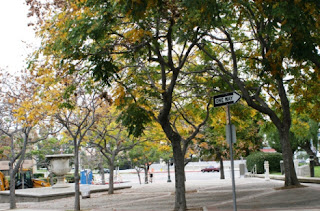 Falk was the founder.  Born in Sweden in 1840, reputedly of German ancestry, he early went to sea.  According to descendants Falk began as a deckhand on a voyage from London to India via the Cape of Good Hope.  Showing considerable aptitude as a seaman, he was promoted to second mate, subsequently employed on a ship that sailed around Cape Horn and eventually landed in San Francisco.  Falk liked California and decided to stay, in time advanced to captain on the sailing ship Glendale.

That post employed him hauling lumber up and down the California coast and provided him with an opportunity to explore a number of ports of call.  After first seeing San Pedro in 1877, a major port town near Los Angeles, he marked it as likely place to settle down.  Because of its access to the sea, a wharf had been built there as early as the 1850s.  A horse-drawn freight and stage service connected it to Los  Angeles.  Soon San Pedro was made an official U.S. “port of entry” with its own customs house.  Development of the town to support the port did not occur until 1881 when the railroad arrived.  By 1883 a new 1,600 foot wharf had been constructed along the waterfront, followed by railroad yards. A business district began to take shape. 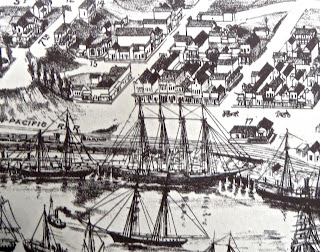 Visiting San Pedro with his ship periodically, Falk could see the potential for growth and in 1890 settled there permanently.  He bought property at the corner of Sixth and Front Streets and constructed a block of buildings that included the Pepper Tree Saloon.  An 1893 map of the San Pedro showed the community in detail — the port, the railroad line, the streets and the newly-constructed buildings.  In a detail above, the Pepper Tree Saloon would appear to be the structure partly obscured by the left-most mast of the four-masted ship in the foreground. 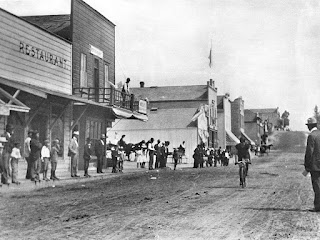 Like many port towns, San Pedro did not lack for saloons, many of them along Front (now Harbor) Street, shown here.  They boasted names like “The Admiral,”  “Coaster,” “Johnny’s Place,” “Orient” and “Pioneer.”   Falk determined to name his drinking establishment after a tree. 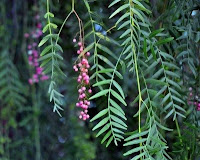 The California pepper tree, shown right, is an evergreen that can grow to fifty feet tall.  A native of the Andes, the tree thrives in arid soils and took well to California climates. Its crushed berries and leaves have been used in traditional medicine for treating wounds and infections because of its antibacterial and antiseptic properties. 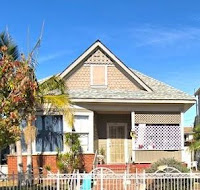 The Pepper Tree Saloon proved profitable for Falk from the outset.  In 1892 he married Ida, a woman some 25 years younger who had immigrated from Germany.   The couple would have five children, four girls and one boy.  With his saloon profits Falk was able to build them a fine house at 330 West Tenth Street.  Shown here as it looks today, it is a single-story hip-roofed bungalow with a large bay window and stick-style detailing on the facade dormer.

As Falk aged, his zest for operating a saloon apparently waned.  At some point early in the new century, he sold the establishment to a San Pedro transplant named John Goudie.  Goudie had been born in 1863 in Belmont, Wisconsin, the son of a merchant who had immigrated from Scotland.  The family subsequently moved to Chase, Kansas, where the 17-year-old Goudie was recorded by the 1880 census working as a farm hand.

Sometime during the ensuing decade Goudie moved further west to California, settling in San Pedro, where the 37-year-old bachelor was recorded living in a boarding house and working as a machinist.  By the 1910 census Goudie was listed as a saloonkeeper, the proprietor of the Pepper Tree, by now a saloon that also featured a poolroom.  Although one author pegged the place as “infamous,” it appears to have had a good reputation with ships captains looking to recruit reliable sailors for their vessels and for wharf bosses seeking stevedores.

Assured of a steady drinking trade, Goudie moved to take a partner.  He was Caspar McKelvy, originally of Pennsylvania, who had moved to California to work as a miner.  His toils had cost McKelvy the little finger on his left hand and may have occasioned his moving out of the mines.  The partnership of Goudie & Caspar was featured by their issuing  a series of amber and aqua whiskey flasks, ranging from half pints to pints, today avidly collected.  They advertised “Louis Hunter Rye” a brand from J. & A, Freiberg of Cincinnati. 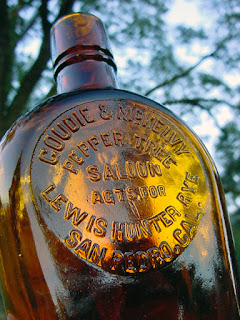 By 1915, John Goudie appears to have sold out to McKelvy, who now ran the Pepper Tree Saloon as a sole proprietor and issued an amber flask bearing only own his name, shown right.

Ensuing years confronted McKelvy and the Pepper Tree with two challenges.  The first was increasing labor unrest along the waterfront.  Longshoremen up and down the Pacific Coast were engaging in strikes and other actions, sometimes resulting in clashes with ship owners and police.  As a gathering place for San Pedro’s stevedores, the Pepper Tree became a hotbed of labor activity that sometimes could spill over into violence.  Second, prohibitionary forces in 1916 were successful in enacting statewide bans on alcohol production and sales in Washington and Oregon.  They now targeted California. 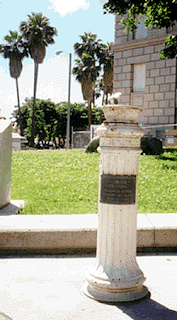 With the coming of National Prohibition in 1920, Caspar McKelvy was forced to close down the Pepper Tree Saloon.  The space then became a union hall.  In use throughout the 14 dry years, the building was the site of the first meetings of the International Longshore and Warehouse Union (ILWU).  Capable of tying up all West Coast shipping the union became a powerful (and controversial) force.  Eventually Falk’s 1890 building was torn down and in its place the community plaza was created, named Pepper Tree.  A water fountain at the approximate site memorializes the historic saloon.

San Pedro, a city in its own right in 1888, voted in 1909 to be annexed by Los Angeles.  In 1988 — 100 years to the day it was incorporated — a local centennial committee held a celebration in Pepper Tree Plaza.  A group of longtime residents re-enacted the signing of San Pedro’s incorporation papers in a replica of the Pepper Tree Saloon.  Gustav Falk’s grandson, Ray, built the replica and took part in the ceremonies, playing the part of his grandfather. 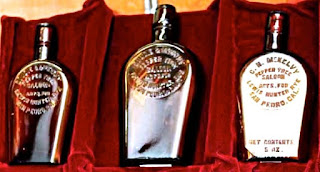 The saloon replica was temporary, but the San Pedro Historical Society in its local museum contains a display of Pepper Tree bottles.  Thus does the saloon and its trio of owners continue as part of the treasured heritage of this California port community.