Foreword:  It may seem strange to anoint a artist as a whiskey man but A.D.M. Cooper deserves recognition as America’s star painter of saloon signs.  For many years of his life he spent extraordinary amounts of time in the drinking establishments of the West, principally providing back-of-the-bar nudes to appreciative proprietors.

Picture an artist, who during his lifetime could command more than $60,000 (equivalent to $1.2 million today) for a single piece of artwork, using his talent to cage drinks from saloon owners across the West in return for painting pictures of scantily clad women, art meant for display behind the bar.  That would be A.D.M. Cooper, the unsurpassed “Rembrandt” of the saloon nude, shown right

Ashey David Middleton Cooper was born in St. Louis, Missouri in 1856.  He was the son of David M. Cooper, a respected physician and Fannie O’Fallon Cooper,  grandniece of the famous explorer, William Rogers Clark.  After studying art at Washington University in St. Louis, Cooper went West,  recording Indian life and landscapes in his drawings and paintings.  In 1883 Cooper moved to San Jose, California, building an elaborate studio in the Egyptian style and spending his evenings in local saloons.

At the time exotic landscapes were the passion of many rich Americans.  Cooper’s paintings became the toast of  California’s “nouveau riche.”   Among them was Mrs. Leland Stanford, the wife of the railroad baron.  She reputedly paid $62,000, at least 20 times that in today’s dollar, to Cooper for one of his canvases but deplored his drinking: "What a sad thing," she reportedly said:  "All that talent--dulled by John Barleycorn."

Despite his aristocratic background and acceptance by California society, Cooper was inclined to “walk on the wild side.”  Edan Hughes, the author of a book on California artists wrote that of the 16,000 he had chronicled, “...None was as colorful as Ashley David Middleton Cooper. That man knew how to live. He was a true Bohemian, and he loved to have a good time. He knew how to party. And paint. And then party some more. He had a zest for life unmatched in the artistic annals of California.” 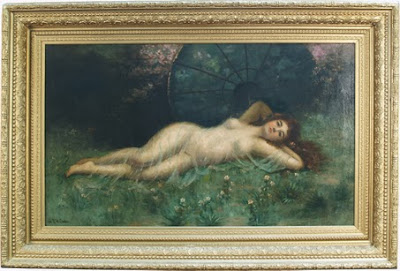 With his definite affinity for alcohol, Cooper is said to have paid many bar bills as he roamed the West by paintings of semi-nude women.  Those pictures came in all sizes and shapes, with one constant:  bare breasts.  Saloon owners welcomed them as a known attraction for their almost entirely male clientele.  Shown above is perhaps Cooper’s most famous nude paintings, known as “The Kansas City Girl.”  It was exhibited throughout the United States, reputedly gathering crowds wherever it went, and was accounted a sensation at the Trans-Mississippi Exposition of 1898, held in Omaha, Nebraska.

According to the story,  Cooper approached a nubile Kansas City lass known for her pretty face and voluptuous figure and asked her to be his model.  He assured her parents that the experience would not sacrifice her “maidenly modesty” and would help pay off the family mortgage.  They agreed and, with mother standing by, she posed for the painting.

A later interview with the young woman by a Washington D.C. newspaper found her to be not bashful about her experience with Cooper.  She was straightforward about the monetary reason for posing, the uncomfortable lounging posture the artist demanded, and  said that she never got tired of watching people gape at her nude picture.  She told the reporter: “I’ll tell you a secret—in your ear—it’s no profession for an ugly woman.” 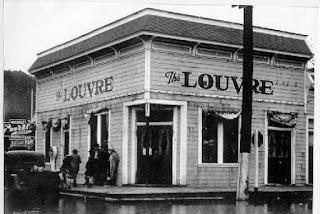 It probably was a good idea that mother was standing by the Kansas City Girl because Cooper,  handsome and charming,  also had a reputation as a lady’s man.  With those qualities went his penchant for strong drink.  He was a frequent and active patron of saloons wherever he went.  It has been said that it was a rare drinking establishment along the California coast that failed to have a Cooper nude hanging behind the bar or prominently on a wall.  One of his favorite “watering holes,” the Louvre Saloon at Guerneville, north of  San Francisco, is said to have displayed multiple Cooper paintings. 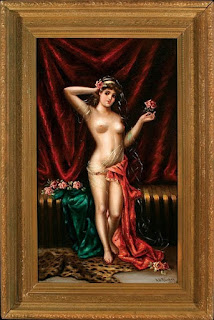 The next Cooper nude shown here is called “San Francisco Girl.”  Why it bears that specific distinction is mystery.  Rather than lounging like The Kansas City Girl she is standing.  Moreover, her settling is an exotic one with velvet curtains, a leopard skin rug, and  scattered flowers.  A similar background was used by the artist to present “Little Egypt,” one of several belly dancers who adopted that name.  That painting, below, recently sold at auction for $34,800. 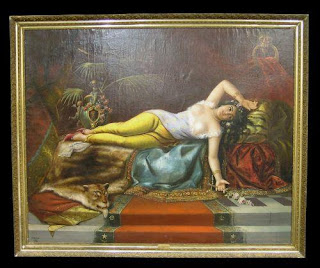 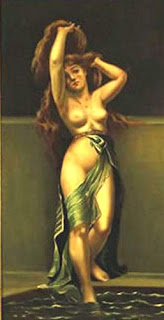 The painting left some critics see as an inferior work, possibly painted while Cooper was suffering a hangover.  Some critics believe that the artist’s drinking was the source of his unevenness.  Others disagree.  Says one:  "Did he drink? Sure he did….Was he an alcoholic? I don't think so. The unevenness in his oeuvre, I believe, reflects the varied reasons why he painted. When he was painting for friends or the local clientele, he often hurried his work.” 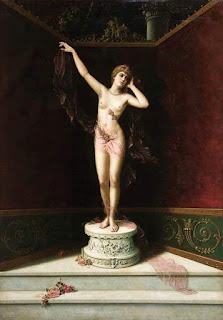 The next painting is derived from the myth of Pygmalion, a Greek sculptor who carved a woman out of ivory and named her Galatea.  Falling in love with his creation, he prayed to Venus. Then he kissed his ivory statue and found that its lips felt warm. He kissed it again, touched its breasts with his hand and found that the ivory had lost its hardness.  Galatea had become a woman and later Pygmalion’s wife and a mother.  The Cooper painting depicts the moment of the statue becoming human.  Said to have hung for years in the Nevada Club Casino in Reno, it recently sold for $6,000. 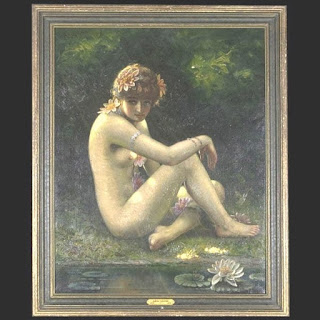 The artist also reached back to Greek mythology for a the final nude shown here.  She is a nymph.  Nymphs are personifications of the creative and fostering activities of nature, most often identified with the life-giving outflow of springs.  True to form, this figure is garlanded with water lilies.   It is difficult to divine if the look on her face is “come hither” or a kind of world weariness.  Only the artist would know.
After years of painting the unclothed, Cooper married at the advanced age of  62.  The daughter of family friends,  his wife was 26 years his junior.  By all accounts it was a happy union.  But brief.  Only five years later, after a long battle with tuberculosis, the artist died in 1924 at his home in San Francisco and was buried in Oak Hill Cemetery.

Subsequently A.D.M. Cooper’s reputation as an artist has had its ups and downs as taste in art has changed over time.  Moreover, the saloons for which he painted were shut down during Prohibition. After Repeal, as more and more women frequented drinking establishments, nude paintings increasingly were deemed offensive and stashed in a back room or discarded.  Nevertheless, a picture with  the signature shown here currently might well be pricey to own, painted as it was by the Rembrandt of saloon art.