Foreword:  In profiling some 660 pre-Prohibition “whiskey men” I have been impressed with the stability that most achieved in their married lives.  Divorce was uncommon.  Moreover, a second marriage usually meant a first spouse had died.  Sometimes, it appears, re-marriage was a way for a man to have a mother for his young children.  My research, however, has revealed three cases of whiskey men in multiple marriages, each of them unique in the conjugal details.

Whoever coined the phrase, “lucky at cards, unlucky at love,” might have had in mind Samuel J. “Sam” Thompson of West Brownsville, Pennsylvania.   Sam won a distillery in a game of chance one night and became famous for making a premier whiskey.  As he was rising  in wealth and prestige, however,  three of his four wives died within five years of his marrying them, one of them leaving him with three small boys. 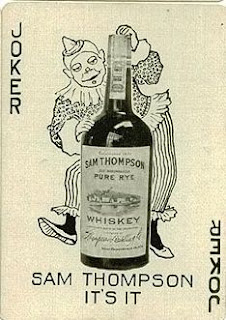 At the age of 23, Sam married for the first time in 1843.  The bride was named Martha Cooper.  After five years of marriage but no children, she died in 1848, leaving a grieving husband behind.  The same year,  Lady Luck was with Thompson in a poker game, winning the deed to a distillery along the Monongahela River.   Although the distillery was the only way of collecting the debt, Sam knew nothing about making whiskey and competition was stiff.  An old friend gave him advice:  “Make better whiskey than the others.”   He did and during the next several decades, the name Sam Thompson Rye became synonymous with quality. 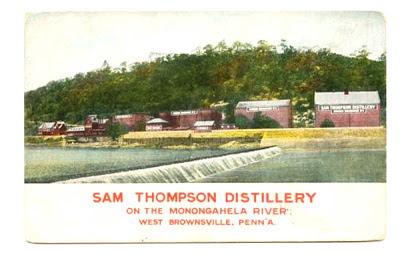 In 1857 Sam moved to a large house on the other side of the Monongahela River in the town of Bridgeport.  Two years later at the age of 39 he married a second time.  She was Esther Wilson of Washington County.  Over the next five years.  Esther bore him three sons.  Then in 1864, this second wife died, leaving Sam with three small children, one of them a baby.   A single father, he raised his boys without a female partner for the next six years.   Then in 1872, at age 52, he married Elizabeth Crawford.  But the Thompson “five year curse” struck again.  Elizabeth died in 1877.

Meanwhile Thompson was demonstrating ability as a businessman with interests in banking, natural gas and coal mining.  He also married again.  This time in 1882, he wed Bridget Dawson, a local widow.  Sam was 62.  Bridget outlived the Thompson 5-year curse by three years and was still living with him at his death.  Sam died in December 1899 at the age of 79 and was buried in a family plot in the Beallsville Cemetery, Washington County, Pennsylvania.  It appears that all four of his wives are buried adjacent to him. 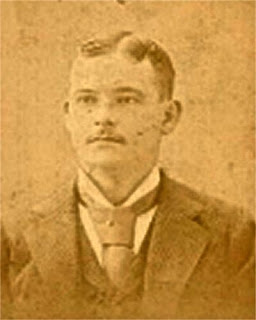 In writing about her Montana ancestor, a descendant headlined an article “Franklin James Pierce — A Complicated Man.”  That was an accurate assessment of a saloon keeper and liquor dealer whose labyrinthine ways and tangled fortunes were reflected in his marriages.  An Ancestry.com family history has copies of three Pierce marriage certificates issued within a single decade.  In 1890 when he was 24, working as a waiter in Butte, Frank met an Irish immigrant girl named Julia O’Neil by whom he fathered a son.  He subsequently wedded her.  After a relatively short marriage, they divorced and she returned to Ireland with the boy. 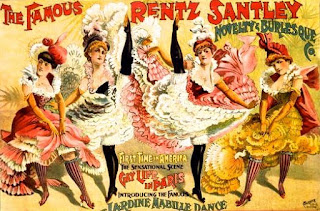 Eventually Pierce moved to Missoula, Montana, where he owned and managed the Gem Theatre, a vaudeville house. There he met and fell in love with Lulu Inman, originally from Kansas City, a dancer who was performing at the Gem.  They were married on New Years Day 1898.  Lulu rapidly became restless “off the circuit” in Missoula, Montana.  When her chance came to join the Rentz-Santley Novelty & Burlesque Company on the road, Lulu left town and abandoned Pierce.  The local newspaper headlined:  “She Refused to Live with Him; Missoula Man Looking for Divorce from His Spouse on the Ground of Desertion.” 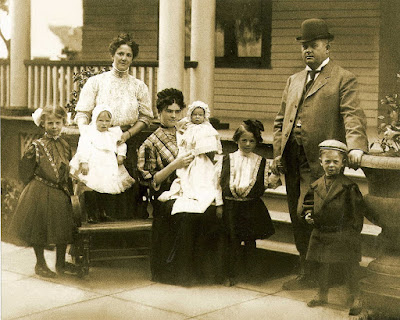 Before long, however,  Frank found true love in the person of Mary Helena Murphy, born into a New Orleans immigrant Irish family.  She also was a performer at the Gem.  In June 1900 the couple were married by an Episcopal priest at Holy Spirit Church in Missoula.  Pierce subsequently opened a saloon and liquor store in Butte, Montana, featuring a whiskey he called “Green Arbor.”  He bought a large house in Butte.  He needed it.  This marriage was destined to last and produce ten children.  A photo from Missoula taken about 1910 shows Frank and Mary (standing) with five of their brood.  They named the two oldest girls “Missoula” and “Montana.”  While some of his children were still youngsters, Pierce died in 1926 of heart disease at the age of 59.

During a highly energetic lifetime James R. “Jim” Hogg managed to juggle the responsibilities for making and selling a nationally recognized brand of whiskey, managing an array of successful local businesses, serving as Mayor of Popular Bluff, Missouri, and winning four terms as County Sheriff.  With enough activities to keep most men exhausted, Hogg also found time for multiple marriages over his 74 years. 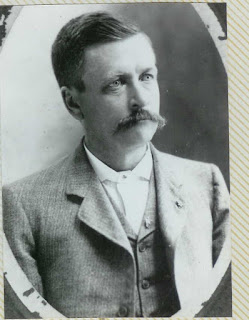 Hogg, shown here, was married five times, divorced four times, and married to one woman twice.   She was his first wife, Ida Dillard, the daughter of Louis Dillard, a pioneer farmer who was one of the founders of Hilliard, Missouri, and a man of some wealth.   When Hogg married Ida about 1880, her father gave him a 160 acre farm in exchange for a wagon and a team of horses.  That marriage produced one son in 1881.  By 1884, however,  Hogg had divorced Ida and was married to Susan S. Klutts who bore him twins in February 1885, one of whom died in infancy.

Fast forward to about 1887.  Hogg had divorced Susan and remarried Ida.  In December of 1888, she bore him a daughter.  Then, possibly as a complication of childbirth, Ida Dillard Hogg died.  Her husband’s grief appears to have been short-lived.  Barely a year later he married Clara Catherine Smith of Poplar Bluff, possibly to have a mother for his children.  Jim and Clara would have three sons of their own in what appears to have been the longest of Hogg’s marriages.  The 1900 census found a family of five Hogg children, one of Ida's, one of Sarah’s and three of Clara’s, all living with the couple. 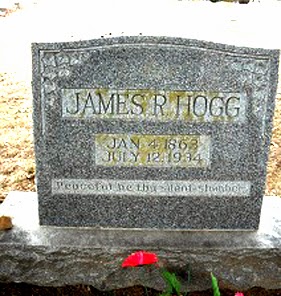 Sometime during the next decade, Jim and Clara divorced. The 1920 census found him, now age 57, married a fifth time to Ruth Naoma Haas (or Hawas), a woman 23 years his junior who was working as a clerk in a dry goods store when they met.  Perhaps because of the age difference this union also was not fated to last. In the 1930 census Hogg was living with his brother and gave his marital status as “divorced.”  When he died by drowning at age 74, the tributes were many, including this one:  “No resident of Butler County was ever closer to his  fellow men than the beloved Jim Hogg during his lifetime.”   The writer might have added  “And closer to Butler County women.”