Foreword:   Most whiskey men were willing to operate successfully one or at most two liquor stores in the same city, apparently not wishing to dissipate their time and talent in dashing among multiple locations.  For a few distillers and liquor dealers, however, building an “empire” of outlets was an attractive and attainable option.  The experiences of three such are recited briefly below. 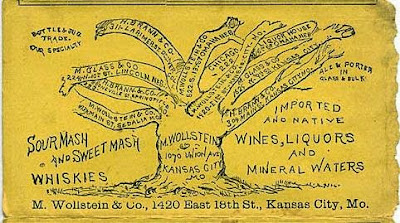 Before the concepts were common in American business, the M. Wollstein Company was a multifaceted conglomerate liquor dealership, as suggested above in an illustration that listed its various entities.  The management structure was presented in tree form, perhaps to resemble a sturdy oak.  Behind this multi-limbed enterprise was the mysterious figure of Theodore Wollstein.

Throughout his life, Wollstein seemed to have avoided the U.S. Census taker.  He first surfaced in the public record operating a short-lived whiskey dealership in Chicago (1877-1878).  About 1880, he established a liquor business in Kansas City, Missouri, at 1070 Union Avenue that the company variously called “Main House” or “Station A.”  It is shown below.  The Wollstein liquor empire eventually would spread over four states. 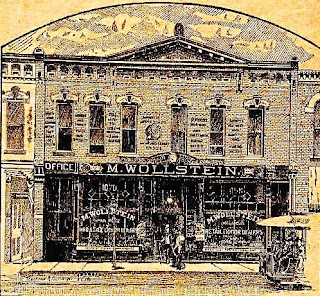 The Wollstein “tree” that looked so firm and healthy eventually suffered considerable damage  The company’s mail order sales were severely curtailed by Congressional action in 1913.  Five retail “limbs” were sawed off in 1916 as Colorado, Iowa and Nebraska all went “dry.”  During World War One and after, U.S. officials began hacking at the liquor empire trunk with accusations of German influence.  National Prohibition provided the final blow of the axe. The Wollstein empire “tree” toppled to the ground.  With its demise went all further traces of Theodore Wollstein, back into the mists of history.

George H. Goodman, a whiskey man from Paducah, Kentucky, was described by a contemporary this way:  “He possess the power of scattering his energies without lessening their force.”   True words.  Goodman was amazing in his ability to keep his liquor business operating smoothly and profitably in no fewer than six widely scattered cities.

In 1900 at the age of 24, Goodman borrowed $500 from his father to start a retail liquor business in Paducah.   As his enterprise became increasingly profitable, he branched out into mail order sales and began to open branch stores in a succession of cities.   They included Jackson, Tennessee; Evansville, Indiana;  Cairo, Illinois;  and Shreveport and New Orleans, Louisiana.  George called these “Branch Houses.”   At one point he also claimed to own the Early Times Distillery in Nelson County, Kentucky, but records fail to sustain the claim.  More likely he was buying all or most of the liquor produced at that facility to create his own brands of whiskey. 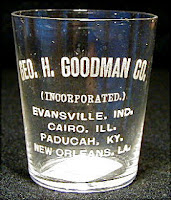 Goodman’s multiple outlets were often recorded on the ceramic jugs he often used to hold his whiskey.  They display a variety of labels, in black and cobalt blue, that likely reflect the places from which they were shipped.  He also bottled his product in glass, once again with his far-flung houses mentioned.  The shot glass shown here lists Cairo, Paducah, Evansville and New Orleans.

In his merchandising literature,  Goodman boasted that the combined business of his houses enabled him to place contracts with distilleries that insured the very lowest market prices. His many outlets, the folder claimed, allowed transport from one to three days earlier than his competition. A Goodman pamphlet, entitled “Our Success”  also asserted that in 1910 his firm realized a total of $800,000 in trade.  If true, the $500 from Goodman’s father  been had been multiplied 1,600 times in less than a decade. 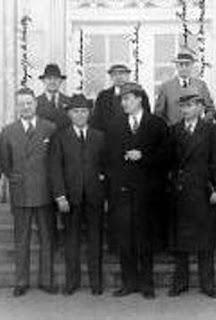 In his later years, Goodman’s prominence was such that President Roosevelt named him as Kentucky State Administrator of the WPA, the Depression-era works organization.  He served in that position for at least the next four years.  He is shown here, second from left, front row, with a number of Democratic politicians. 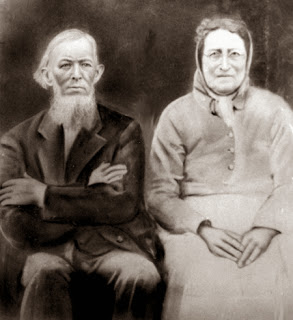 A third multi-city liquor enterprise involved a family — the Sprinkles of whiskey.  Shown here with his wife, Martha, is the progenitor of three generations of whiskey men, Hugh Sprinkle of Liberty Township, Yadkin County, North Carolina.  Following his return from the Civil War Hugh distilled whiskey on his farm for decades, eventually taking two sons, Benjamin and Hugh C. Sprinkle into his operation.  Benjamin in turn passed the skills down to his three sons — Benjamin Jr., James T., and Henry L.   After North Carolina voted “dry” in 1909, the family spread out to several locations in the South. 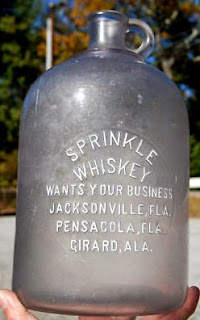 The H.L. Sprinkle Distilling Company -- named for Henry L. “Hence” Sprinkle —was incorporated in 1912 in the town of Girard (now Phoenix City),  located in Russell County, Alabama.  The purpose of the business, as recorded with the state was the: “manufacture, purchase & sale of whiskey.”  During this period the Sprinkles also operated a distillery in or near Pensacola, Florida and had a retail outlet in Jacksonville.

As shown here, much of the Sprinkles' whiskey was sold in glass gallon jugs with the embossed motto, “Sprinkle Whiskey Wants Your Business.”  As shown here, the three cities appeared on each bottle.  After Alabama went dry,  the Sprinkles moved their Girard retail outlet to Monroe, Louisiana. That city subsequently was embossed on the company’s gallon jugs. 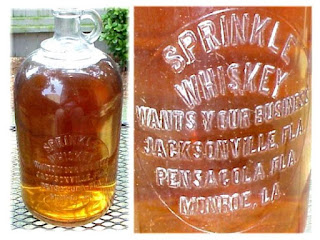 With the passage of the Volstead Act in 1919,  the Sprinkles were forced to shut down their distillery and sales offices.  According to descendants, the family had a stock of liquor when America went dry and members booked passage on ships and took their whiskey to sell in countries abroad.