Introducing the Roddewigs of Davenport 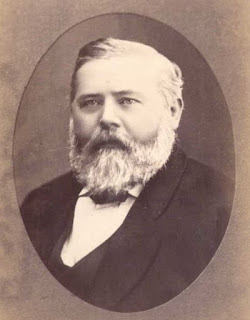 As twenty-year-old Ferdinand P. Roddewig, shown right in maturity, endured a 64-day ship’s crossing from Germany to New Orleans he scarcely could have envisioned his future in America.  It would include combat service in the Civil War, starting a cigar factory in Missouri, recognition as a leading Iowa businessman, a run for mayor of Davenport, and founding a hugely successful liquor house that, with his sons, endured for more than six decades.

Ferdinand was born in Westphalia, Prussia, in June 1828, the son of Charlotte and Frederick Roddewig, clerk of courts in the large city of Biedefield.  His parents had a “mixed marriage”: Charlotte was a Catholic, Frederick a Lutheran.  One of eight children from their union, Ferdinand was educated in German public schools until the age of 15 when he went to work in a local wholesale linen store.
Five years later he decided to leave for America aboard the Bremen Barque Erhard, a combination sailing and steam ship, shown below. 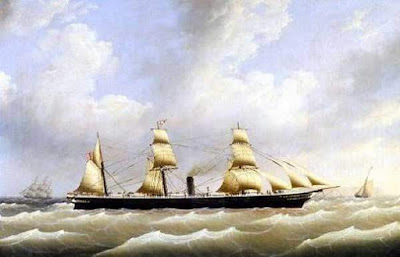 The ship stopped at ports along the Atlantic coast, arriving nine weeks later in New Orleans.  The manifest records Roddewig coming alone, his luggage as “one chest, one trunk” and his occupation “trader.”  He initially found employment in a cigar factory.  Learning the craft and saving his money, he moved to St. Louis, with its heavy German population, where he opened his own cigar factory in 1851. 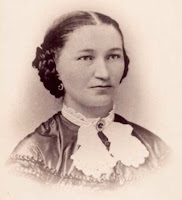 In 1853, Roddewig returned to Germany to see his parents, a visit that appears to have sparked the 25-year-old bachelor to thoughts of marriage.  Upon his return he hied to Sheboygan, Wisconsin, where he wooed and won Henriette (known as “Metta”) Koehler, 23, the daughter of Ferdinand and Ernestena Koehler.  Shown here,  Metta had been born in Biedefeld and it is possible the couple knew each other growing up.

After their marriage, the couple returned to St. Louis where Ferdinand resumed running his cigar factory.   In 1855, perhaps wanting a location closer to Metta’s family,  Roddewig disposed of his cigar business and moved his family east to Davenport, Iowa, a heavily German-American city.  There he opened a grocery and liquor store at 413-415 Harrison Street in a double frame house, described as an enterprise with a modest beginning that grew year by year.

When the Civil War broke out in 1861 and President Lincoln asked for volunteers, Roddewig  immediately answered the call of his adopted country.  Although he had a successful business, a wife and three children, and was 33 years old, Ferdinand joined the 1st Iowa Voluntary Infantry Regiment as an enlisted man and was mustered in on May 14,1861.  Made up entirely by men from Davenport and the surrounding Scott County,  the following August the regiment was engaged in the first battle of the Trans-Mississippi Theater near Springfield, Missouri, a place called Wilson’s Creek.  An artist’s depiction of the battle is  shown below. 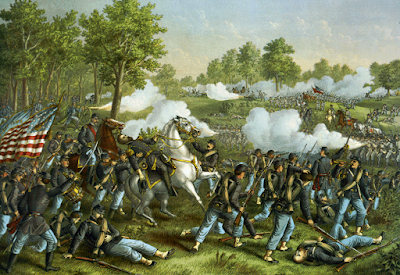 Union forces were defeated and the commanding general was killed.  The 1st Iowa lost one officer and 19 soldiers in the battle.  Roddewig emerged unscathed but when the regiment was mustered out after the required 90 days of service, he seemingly had enough of hot combat and did not re-enlist. 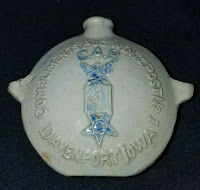 Ferdinand returned to Davenport, his family and his business.  As it flourished, he increasingly emphasized liquor sales and in 1869 eliminated groceries to concentrate on wine and whiskey.  A 1922 article about him in the Davenport Democrat & Leader newspaper credited his success and recognition in the community to his being “…the embodiment of good fellowship and sound business principles, and he was a valued member in the prominent social circles.”  Roddewig was a member of the German Turnverein, the Harmonia singing society, the Shooters Association, the GAR, and eventually accounted “the oldest wholesale liquor man in the city.”

So popular was Roddewig that although considered an independent in politics, he was drafted by the Democratic Party in 1881 to run for mayor of Davenport. Praising his selection, the Quad City Times reported that: “…His nomination was made without his knowledge, but his acceptance of it, as a duty, will be a matter of course.”  Shown here is a flyer for a rally for “Roddewig and the Whole Democratic Ticket.”  Note that the rally was to be held in the German Turner Hall. “This is no 1st of April joke,”  the flyer asserted, “but means business.”  In heavily Republican Davenport, however, Roddewig lost. 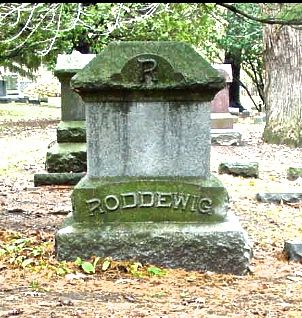 As he aged, Roddewig brought his sons — Peter and Ferdinand Jr. — to work at the liquor house.   With their father’s training they were able to relieve him of a variety of management burdens.  Roddewig was still fully in charge, however, when in December 1885 he suddenly was stricken and died at age 57.  He was buried in Davenport’s Oakdale Memorial Gardens next to Metta who had pass ten years earlier, only 45 years old.  The monument that marks their graves is shown here. 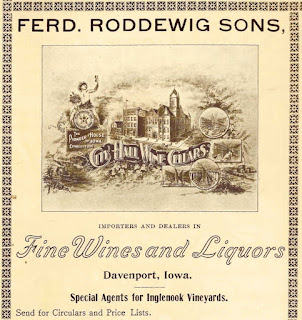 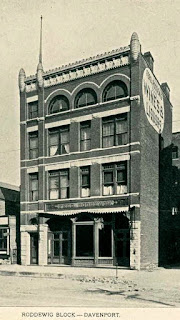 Peter and Ferdinand Roddewig lost no time taking over the reins of management, changing the company name to “Ferd. Roddenwig’s Sons.”  They also financed a new headquarters on Harrison Street for their establishment called the Roddewig Block.  An 1887 brochure from the city of Davenport, hailed “the fine premises, so centrally located, have no superior in the west.”  The main floor, where the liquor and wine were stocked, was 32 by 152 with a 15 foot high ceiling.  The cellar allowed for more storage as did a warehouse in the rear.   That was completely filled with wine and liquors, said the brochure, enabling the Roddewigs “to fill the largest wholesale orders.” 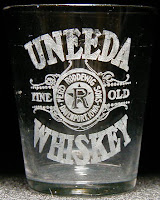 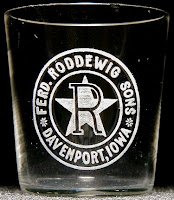 The brothers also opened a store across the Mississippi River in Rock lsland, Illinois, likely as a hedge against the growing movement toward statewide prohibition in Iowa.  During their tenure they issued multiple shot glasses, most of them advertising the company flagship brand, “Uneeda Whiskey.”  The glasses are shown throughout this post. 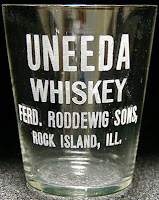 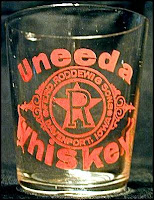 Under the second generation of Roddewig management, the liquor house continued to flourish.  According to the Davenport Democrat & Leader:   “The gentlemen are popular and respected citizens, noted for their honorable methods and sterling integrity, and worthily maintain the lead as importers of wines and liquors, controlling, as they do, the best class of trade in this city and all through the state.” 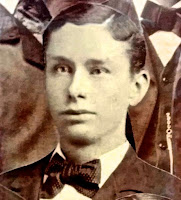 The elder brother,  Peter Roddewig lived at 713 1/2 West Third Street with his wife Minnie. They had one son, Harry.   Peter died in 1905 at the early age of 46 and was buried in Davenport’s Fairmont Cemetery.  After his death Ferdinand Jr., shown here, carried on with the liquor house.  He and his wife Annie (nee Martzahn) raised their family of five, four boys and a girl, while living above the liquor store.   Ferdinand Jr. also was an officer with the Davenport Paving Brick and Tile Company and an incorporator of the  Downs Hotel, later called the Saratoga. 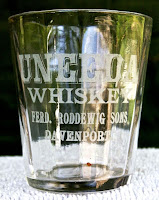 With the coming of Iowa statewide prohibition in 1918, two years in advance of National Prohibition, the remaining Roddewig was forced to shut down sales of wine and liquor and shut the doors permanently on the business his immigrant father had begun in 1855.  In the 1920 census Ferdinand Jr., age 55, gave his occupation as “merchant - retired.”  He died nine years later and was buried in Fairmont Cemetery not far from his brother.   Over its 63 years in existence the Roddewigs’ liquor house had survived the Civil War, political defeat, and several national financial “panics.”  It could not outlast the forces of Prohibition.

Posted by Jack Sullivan at 5:53 AM