The Carstairs Were Philly Brahmins of Booze 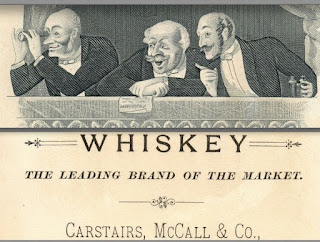 In a 1860 Atlantic Monthly article called “The Brahmin Caste of New England,” physician and author Dr. Oliver Wendell Holmes Sr. wrote of the region’s rich and well-born, like the men shown above.  Subsequently the term has been applied to upper crust families particularly in Boston, New York, and Philadelphia.  Hailing from the the Quaker City, the Carstairs family, despite getting rich by selling liquor, were well qualified as “Brahmins.”

The progenitor of the clan was Thomas Carstairs, born in 1759 in Fife, Scotland, who emigrated to the Pennsylvania Colony as a youth, marrying Sarah Hood Bradford in Philadelphia  in 1775.  Although Carstairs’ advertising put the origins of their liquor house at 1788, data on Thomas gives no evidence of such a  business.  Thomas’ obituary listed him as a “paymaster.”

The next Carstairs, James, was not born until 1789.  His early occupation was in finance, having married Sarah Britton Summers, daughter of Andrew Summers, a wealthy Philadelphia banker and intimate friend of Robert Morris, known as the “Financier of the Revolution.”  Sarah’s mother was the sister of Admiral Charles Stewart, who commanded a number of Navy ships, including USS Constitution, during the War of 1812.  Confirming the “brahmin” nature of the marriage, Jerome Bonaparte, youngest brother of Napoleon I, was an usher at the wedding.

About 1834, James took a sharp turn from banking and established a business as a wholesale grocer and ships’ chandler, providing supplies and equipment for the many vessels porting at Philadelphia and, it was said, he “did a large and profitable business.”  Key among his stock was rum and whiskey, and in the 1870 census, James Carstair’s occupation was given simply as “liquor.” 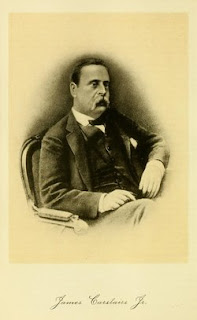 It was James’ son, James C. Carstairs Jr., seen left, who took the family firmly into the whiskey trade.  By 1860 he had entered a partnership with Philadelphia merchant Joseph F. Tobias in a liquor dealership that bore the Tobias name.  That same year James Jr. married a Philadelphia “blue blood,” Mary White Haddock.  Her father, Daniel Haddock Jr., was a well-known Philadelphia boot and shoe manufacturer, banker, and a director for other local companies. 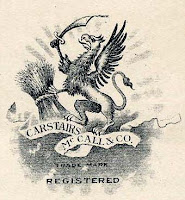 By 1870 James Jr. had left Tobias and with a new partner, John C. McCall, created a liquor house called Carstairs, McCall & Co.  The business was highly successful.  An 1893 write-up of the firm reported that “their extensive operations as importers, exporters and wholesale dealers constitute them an important factor in the wine and liquor trade of the country.”  By this time Carstairs, McCall had opened outlets in both New York and Boston. 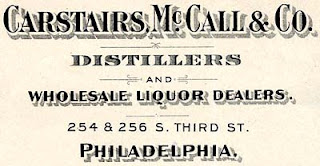 Citing the firm’s purported 1780 beginnings, the item continued:  “Such a protracted standing and close, perpetual touch with growers, distillers, and leading sources of supply in this country and Europe have resulted in an enormous trade….”   The company also was exporting American rye and bourbon “in heavy and regular shipments to Europe, Central and South America and elsewhere,” according to the report. 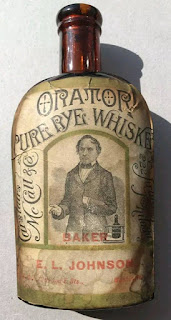 Particularly arresting is the label on Orator Rye, showing a stump speaker in full throat who apparently is being fueled by the whiskey on the dais with him.  It likely depicts Edwin Dickenson Baker, a noted American orator killed during service as a Union officer in the Civil War. 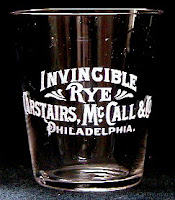 Like other successful whiskey houses, Carstairs, McCall provided wholesale customers, including saloons, hotels and restaurants, with giveaway items.  They included saloon signs such as the one at left that depicts a wounded Union soldier on horseback receiving a bottle from a nurse — a bottle identified as Carstairs Rye.  Other gifted items were shot glasses and back of the bar bottles, examples to be found throughout this post. 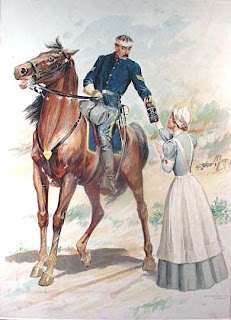 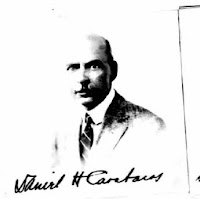 Before 1890 James C. brought his two sons, Daniel H. and J. Haseltine Carstairs, into the firm.   Shown right in a passport photo, Daniel was the elder, born in 1962;  his brother had come along a year later.  In 1893 Daniel was recorded as the manager of the Philadelphia office.   Shortly after, both his father and John McCall died, leaving the firm in the hands of the next generation of Carstairs.

By that time each brother had wed.  David married Louise Sowers Orne, the daughter of Philadelphia Judge Edward B. Orne.  They would have two children before apparently divorcing.  David then married Viola Howard in April 1906. No children have been reported.  J. Haseltine wed Belle A. Wolfe Wilson in 1884 and had one daughter.  After 34 years of marriage in 1918, Belle died and he re-married.  J. Haseltine’s union with Gertrude Reinhart produced a second daughter.

The Carstairs brothers continued the name of Carstairs, McCall until 1909 and then dissolved the company only to re-appear in the liquor trade in a somewhat different guise.  Because Carstairs, McCall had been rectifiers, not distillers, they were dependent for raw product from which to construct their brands on distilleries located elsewhere.  The availability of supply could fluctuate significantly, sometimes through natural causes, sometimes by machinations of “Whiskey Trusts.”  In the late 1800s, the Carstairs attempted to alleviate the shortages by buying into and controlling their own distillery. 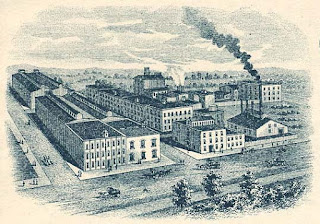 The facility they chose was The Robert Stewart Distilling Co., shown here, located in Highlandtown, Maryland, about one hundred miles southwest of Philadelphia.  Federal records show the Carstairs drawing whiskey from that source by 1898.  The brothers appear to have purchased the Stewart Distillery outright in the early 1900s.  Under their ownership production appears to have increased significantly.  In 1905 Maryland’s State Tax Commissioner reported that the taxable value of distilled spirits for the year had increased to $328,984, jumping again to $421,292 in 1907. The siblings also reincorporated after 1909 as the Carstairs Bros. Company having consolidated Carstairs, McCall into the Stewart Distilling Company.  In a 1911 ad, shown here, they claimed that Carstairs Rye was “the oldest American whiskey” and boasted that it had been sold “in every high class [read Brahmin] New York club, cafe and hotel for the past 112 years”  — a clear exaggeration.

The Carstairs family continued to guide the fortunes of the liquor house they had inherited until the coming of National Prohibition.  The last withdrawal in federal records occurred in 1920.  Both brothers died in 1934, just as Repeal was occurring.  Daniel succumbed on January 25, cause unknown, and J. Haseltine the following December 21.  According to his death certificate, he died from cirrhosis of the liver and diabetes. 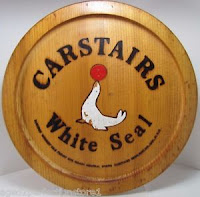 The Carstairs brand name was revived for a time after Prohibition, attached to a whiskey called “White Seal.”  Said to be a product of the Barton 1792 Distillery in Bardstown, Kentucky, White Seal is a blend of bourbon, grain whiskey and neutral spirits.  The product reputedly does not meet the legal definition of whiskey in some states and is available only in limited markets.  It clearly is a “bottom shelf” label and a far cry from the “Brahmin” origins of the brand.  The Carstairs must be turning over in their graves.

Note:   This post was gathered from a wide range of sources.  The quotes on Carstairs, McCall above are from an 1893 booklet entitled, “A Souvenir of New York’s Liquor Interests,” no author given, from the American Publishing & Engraving Co. of New York City.

Posted by Jack Sullivan at 6:16 AM