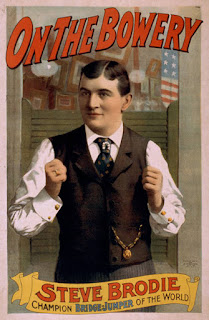 In the early 1890s, the New York City tour buses regularly stopped at the door of a saloon at 114 Bowery Street and passengers rushed inside to see the proprietor who was waiting for them behind the bar.  What they saw was the suave gent shown here who was eager to tell them the story of his leap off the Brooklyn Bridge and how he lived to tell about it.  His name was Steve Brodie and this was his “Famous Bowery Saloon.” 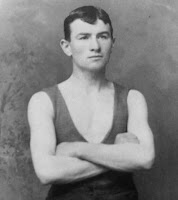 Born in Gotham in December 1861 into a poor family, Brodie early worked as a newsboy, bookmaker, and gambler to scrape by.  As he grew to manhood he watched the construction of the engineering marvel of the time, the Brooklyn Bridge. At 1,600 feet long and 135 feet above the water the span time was considered the highest bridge in the world.  By now 23, the young Brodie was married but broke and owed large gambling debts.  He solicited a bet that if he survived a jump from the Brooklyn Bridge, he would win $200 and, more important, a local liquor dealer pledged to back him in opening a saloon. 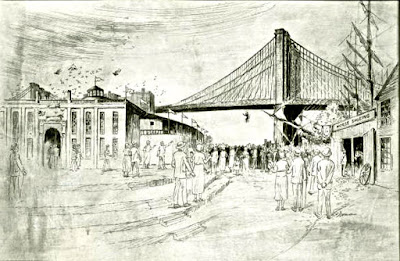 On the morning of July 22nd, 1886, Brodie said goodbye to his wife, Bridget, and climbed on a wagon that was crossing the bridge.  Down below friends sat in a rowboat waiting.  Stories differ.  Bystanders shouted “suicide” as they saw the form of a man preparing to jump and in a moment it was over as the form hit the water.  Suddenly the rowboat was moving rapidly toward a man flailing in the water.  Brodie’s friends pulled him into the boat and rowed to the Manhattan side of the bridge where Brodie was arrested.  Headlines in New York papers the next day gave banner coverage to the story of Stevie Brodie and his jump.  Soon the entire country knew.

But there were skeptics.  Just a year earlier a trained swimmer and diver named Odlum had tried the stunt and been killed instantly upon hitting the water.  Out of jail and lionized by the press, Brodie claimed that he had developed a special technique for the dive, perfecting his form for months by taking practice jumps off lower bridges and the masts of ships.  Moreover, as a competative athlete he was in prime physical shape.  The only total eye witness of the jump, however, was Brodie himself. 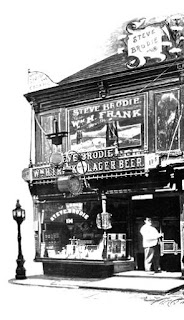 Still basking in the public limelight, Brodie opened his saloon shortly after his release from jail.  He made sure that his three room drinking establishment was a cut above the usual Bowery dive.  The floors were inlaid with silver dollars, the walls covered with humorous quips, and above the bar was a huge oil painting replicating Brodie making his famous Brooklyn Bridge leap.  Next to it was a signed affidavit by a boat captain that he was the one who dragged Brodie from the East River. Below, a photo montage exists of the saloon interior with Brodie, now approaching middle age, standing behind his bar and working in his picture-filled office.  One author has said that Brodie’s drinking establishment “partially served as a temple dedicated to himself.” 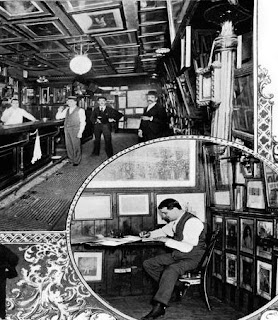 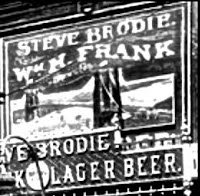 A second large painting of the bridge graced the outside of Brodie’s place. The sign indicated that his was a “tied saloon,” featuring only one brand of beer in return for financial incentives from the brewers — in this case the William H. Frank Brewing Company in Brooklyn.

Frank, an experience brewmaster, had invested in an existing brewery, in 1893 and changed its name to his.  He soon expanded the beer output to 150,000 barrels or 4,650,000 gallons annually.  From his brewery. shown below, he issued glass bottles that featured elaborate embossing of an eagle rampant on a horseshoe. 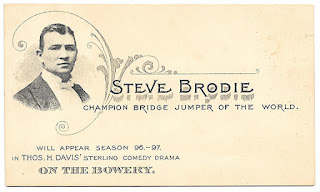 Meanwhile Brodie was pursuing a second career.  He became an actor, appearing in vaudeville musical skits.  One theatrical in 1894 focussed on his own exploits.  Called “On the Bowery,” it used a set fashioned after his saloon and as a finale had him make a faux jump.  One of the playbills from “On the Bowery” depicts Brodie behind the bar serving a top-hatted customer while a Bowery bum siphons alcohol from a cigar lighter.

As time passed and questions continued to be asked about the veracity of his story, Brodie reacted negatively to the skeptics and the cooling of his fame.  He moved to Buffalo, New York, where he opened a new saloon.  There he made it known that he contemplated a new stunt — jumping over Niagara Falls.  He never did. 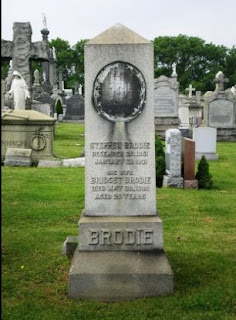 Subsequently Brodie pulled up stakes again and moved 1,460 miles west to San Antonio, Texas, perhaps for reasons of health.  There in 1901 at the age of 39 he died.  The cause was variously laid to diabetes or tuberculosis.  His body was returned to New York where he was interred in Section 9, Plot 443, Grave 13 of Queens County’s Catholic Calvary Cemetery.  To his dying day Brodie proclaimed vehemently that he had indeed made that famous jump in 1886. 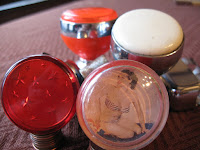 Addendum:  His death, however, did not end the Brodie saga.  In 1933, more than two decades after his passing, Hollywood retold his story in a film called “The Bowery.”  It starred tough guy George Raft as the fearless jumper.  To attempt a seemingly suicidal or high risk stunt even today is known as “to do a Brodie.”  I came on the saloonkeeper’s story while doing research on automobile steering knobs, shown here.  Wikipedia states that they are generally known as “Brodie knobs” because of the dangers they present when driving. Thus a knob preserves for posterity the name of perhaps the most famous daredevil of American history.

Posted by Jack Sullivan at 5:59 AM