Forward:  Suicide is the ultimate act of despair,  It can spring from many causes to lead an individual to lose all hope of the future and take his own life.  Although whiskey men generally were of an optimistic mindset, a few found themselves in situations where death seemed the best way out.  Here are recounted briefly the stories of three men who close that alternative.

Given the easy access to strong drink, I find it somewhat surprising that of the some 720 whiskey men I have profiled, only two definitely have been identified as becoming alcoholics. Billy Wood was one of them. Wood was well-known and for a time well-respected saloonkeeper in Eureka, Utah, a pioneer settlement that grew from a mining camp to become the largest city and the center of commerce for an entire region.  Wood contributed to that development as well being a popular publican whose Oxford Resort, according to press reports: “…Had the best business in town.”   Th building is shown as it looks today, run down. 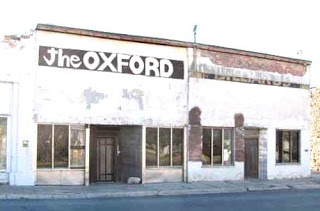 As time passed, Billy married, fathered two daughters, and gradually, as his obituary put it, developed “an uncontrollable appetite for alcohol.”  Recognizing the strains his drinking was putting on his marriage and business, Woods twice put himself into the hands of the Keeley Institute, a nationwide chain of 200 clinics that claimed to offer a “scientific” cure for alcoholism.  Despite glowing testimonials from former patients, the medical profession was skeptical.  Keeley treatments clearly did Billy little good.  In the Fall of 1899, returning from a “Keeley Cure” on the West Coast, he resumed his drinking almost immediately and his wife made good on her promise to leave him unless he reformed.

Plunged into despair, Wood decided on a desperate way out.  According to his obituary in the Salt Lake Tribune of September 22, 1899, he soaked strips of flypaper in water, knowing that they contained arsenic.  Then he drank the water.  Death by arsenic poisoning is not an easy way to commit suicide.  Symptoms begin with headaches, severe diarrhea, and drowsiness.  When the poisoning becomes acute, symptoms include diarrhea, vomiting blood, muscle cramps, stomach pain and convulsions.  The final result of arsenic poisoning is coma and death.  Wood’s suicide occurred when he was only 33 years old.

Below the headline here, datelined December 15, 1909, is the story of B. B. Dillard, a well known Roanoke, Virginia, whiskey dealer and civic leader.  At the age of 40, in front of his wife of only four months, he shot and killed himself.  Was it an accident, as she insisted, or had he committed suicide?  Popular opinion at the time held the latter. 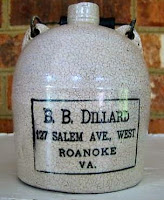 The photo above captures the interior of Dillard’s liquor store, indicating that it was a substantial establishment.  The place featured a potbellied stove for heat and gas lamps for light.  Note the row after row of bottles on the shelf on both sides of the aisle.  On the left at back are barrels full of whiskey with spigots to fill stoneware jugs that can be seen on the floor.  My guess is that the gent with the long coats, bow tie and mustache at far left is B. B. himself.

In 1904, tragedy struck Dillard and his family, his wife only 33 years old, died, leaving him with small children to raise.   As great a sorrow as this may have been, he did not immediately remarry but appears to have thrown his efforts into his work and community involvement.

Five years after his wife’s death, Dillard married again.  His second wife was Nannie Carrie Flagg, 23 years of age;  he was 40.  Whether this age difference played any part in what occurred is unknown.  What is known is that on December 14, 1909, B.B. went home, shot and killed himself in the presence of Nannie Carrie.  They had been married only four months.

There seems to have been little reason for Dillard deliberately to take his life.  His obituary noted that he “had been successful in real estate and had amassed a fortune.”  Friends who had seen him the evening before his death declared he was in a happy mood. Finally, his widow was adamant that the shooting had been an accident.  Nevertheless, the coroner suspected suicide.  In the end, it is impossible to know.

William W. Cooper may never have gotten to New York City, but he might have wished he had.  He contracted a bad case of those “little town blues” when he was forced to close up his prosperous distillery and liquor business in Marion, McDowell County, after North Carolina banned making or selling “spiritous liquors” in towns of fewer than 1,000 residents.  Marion missed the cut and Cooper had to shut down his flourishing operation and in 1902 move 70 miles east to Statesville, North Carolina.

Although Cooper again was successful in Statesville, he was forced to shut down his liquor business in 1908 for a final time because of a statewide ban on all alcohol sales.  Just 34 years old at the time, he was recorded in the 1910 census living with his wife, Camille. His occupation at that time was given as “Agent, Restaurant.” 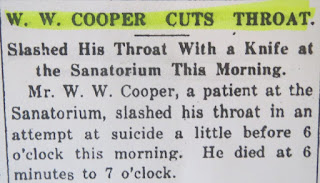 When earlier I wrote about Cooper employing the "little town blues" theme, it was without any idea that he was afflicted with depression and later showed signs of being suicidal.  Subsequently, however, a thoughtful resident of Statesville after reading my post sent me news stories, recounting the details of Cooper’s death. While living in Statesville, William had to be institutionalized several times and in June 1913 ended by taking his own life, surely a tragic end for so young and talented an individual.

Only one of the news stories about his suicide directly addressed W.W. Cooper’s character and it is that on that note that it seems most fitting to end: “..Mr. Cooper was a kindly, generous man and readily made friends."  May he rest in peace together with Billy Wood and B.B. Dillard.