Emanuel of Manhattan: Eising on the Cake 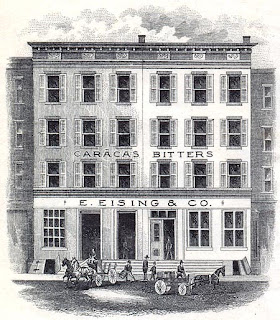 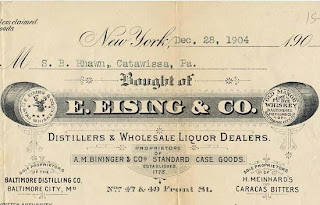 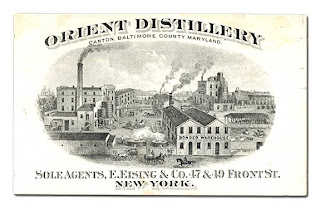 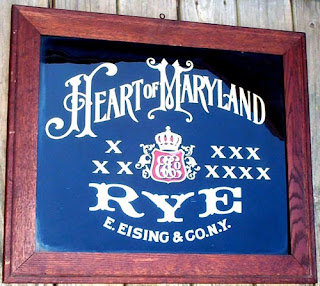 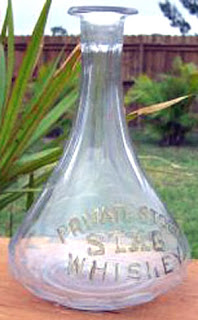 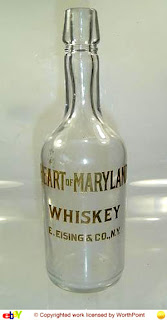 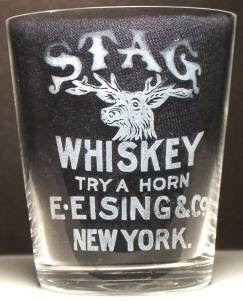 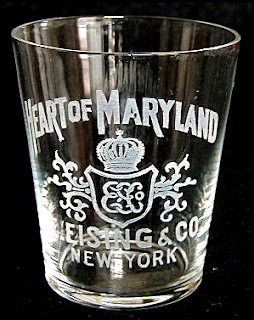 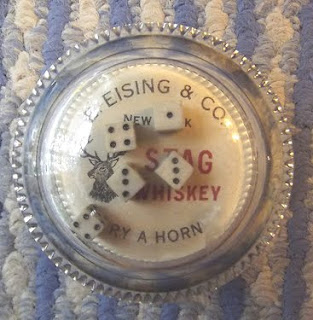 In dealing with the story of Emanuel Eising, prominent New York whiskey man, I must be forgiven the awful pun on his name. His record remains, however, that of a merchant who provided customers with a range of attractive artifacts to sell his already popular brands of liquor and so, in effect, put “icing on the cake.”

Eising was born in Wallerstein, Bavaria, Germany in 1836 to parents of Jewish heritage. His Mother, Babette Wertheimer, had been born in Manhattan but following her marriage to Henlein Eising, a German 18 years her elder, she moved back with her husband to Bavaria. The entire family likely re-entered the United States sometime in the 1840’s-1850’s and settled in New York City. Henlein died in Manhattan in 1862.

In 1864 the young Emanuel married Augusta Carolina Blun, a New York resident. She was an immigrant from Prussia, born in Worms, Hesse, in 1845. Nine years younger than her husband, she would bear him seven children, four boys and three girls. By the 1870s, Emanuel was fully into the whiskey trade. In 1874 he ran afoul of the Internal Revenue service for nonpayment of liquor taxes. Despite this setback, he clearly was prospering. The 1880 census found him living in a large house in Manhattan with Augusta, their children, and three servants, including a German nurse, an Austrian cook, and an Irish maid.

Emanuel Eising & Co. first shows up in New York business directories in 1880 with a location at 47049 Front Street. As a blender of whiskey, Eising needed a steady supply of distilled product which apparently proved difficult from time to time. Over the years, the firm would claim control of or interest in at least three distilleries. Among them were the Baltimore Distilling Co. of Baltimore, Maryland. Early letterheads state Eising is the sole proprietor; later he claimed only to be a stockholder.

A trade card shown here also lists E. Eising as the sole agents of the Orient Distillery of Baltimore. Founded by a leading Maryland businessman, Edwin Walters, that distillery was an enormous facility. The back side of the card advertises Eising as a distiller and dealer of bourbon and rye whiskies. Eising may have led a consortia of wholesale whiskey dealers who purchased the Orient Distillery from Walters. Later, in 1913, Eising claimed a stake in the Commercial Distilling Co. of Terre Haute, Indiana.

Whatever his source of supply, Eising used a series of brand names, including “Stag,” “Heart of Maryland,” “Marshall,” “Old Dominion,” and “Old Manor.” He also advertised as the source of “Caracas Bitters.” Although he registered Old Dominion with the government in 1893 and again in 1906, his flagship brands appear to have been Stag and Heart of Maryland. He trademarked Heart of Maryland in 1905 and Stag in 1907, the latter with the slogan: “Try a Horn.”

For each brand he issued giveaways for favored saloon customers, including expensive reverse painted mirrors. The Stag mirror appears intended for installation on a barroom door. Eising also gave away back of the bar bottles and shot glasses for the two brands, as well as a bar top dice game in a paperweight that advertised Stag Whiskey. The reach of Eising’s liquor brands was reflected in a 1908 novel in which the narrator says of an Irish drover: “By the cock of his hat and the leer of his eye I could see he had imbibed some more Old Dominion Rye on the road and was on the warpath.”

Eising’s son Harry upon reaching maturity was brought into the firm and assumed more and more of the management as his father aged. Records indicate that Harry was sent periodically to Baltimore to look after his father’s important distilling interests. In 1910 while living in New York City, Harry was named a director of the Merchants Fire Company of Baltimore, a business primarily devoted to providing fire insurance to distillers. Prior years had seen a number of Baltimore whiskey operations go up in smoke.

In time Emanuel Eising was recognized as a pioneering businessman in New York City. This was epitomized in 1913 when he was among the honored guests for a memorial service for Isador and Ida Straus, co-owners of Macy’s Department Store, who had lost their lives during the sinking of the Titanic. Harry Eising and his wife also were among the guests.

With the advent of Prohibition, Eising and his son -- despite all their hard work -- were forced to shut down their liquor business. Emanuel never saw the law repealed. In 1924 he died at the advanced age of 88. He is buried with his wife and other family members behind a large family monument with individual headstones in Salem Fields Cemetery, Brooklyn.
Posted by Jack Sullivan at 8:12 AM