The "Peculiar" Whiskey of Napoleon Pichette 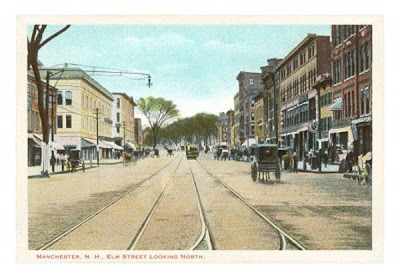 Sometime in 1908, a stranger entered a liquor store in Manchester, New Hampshire. It was located on Elm Street, a major retail thoroughfare, shown here. Without raising particular attention, he purchased several bottles of two house-labeled brands. The stranger left without fanfare but would be heard from again. 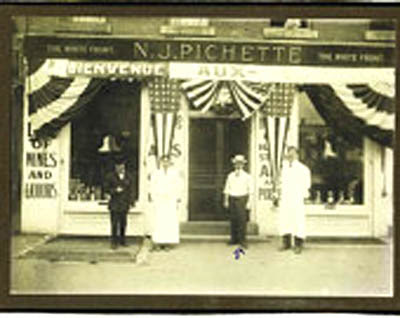 The liquor store was owned and operated by an individual with the colorful name of Napoleon Pichette. In the picture of his shop shown here, he may be the individual at left with his hand in his coat, a la Napoleon Bonaparte. Our Napoleon, while of French ancestry, was born in New Hampshire in 1874.

He grew up and was educated in Manchester. In 1904 he married a local girl, Bethilda Anna Marie Turcotte, whose father was a well-known merchant in town. Also of French ancestry, Bethilda was 11 years younger than Napoleon. They had two sons, Paul Alexi, born in 1905 and Jean Louis, 1907.  A daughter, Pauline, died in infancy. The family eventually lived at 258 Jewett St., corner of Hayward, one of only two houses in the city block. Pichette was not an uncommon name in Manchester. A 1901 directory lists 11 of them. Most were laborers or craftsmen. Napoleon was the only merchant among them, perhaps by virtue of having "married up.”

In an advertisement at the time,  Pichette and his partner called themselves “importers, wholesalers, retailers and bottlers,”  advertising wines , cordials and liquors.  The prime commodity, however, was whiskey.  Napoleon was a rectifier,  that is, someone who blended and then bottled various kinds of liquor.  Too

often, however, rectifiers resorted to adding other ingredients, such as flavorings, presumably to improve the taste. In 1894 a doctor, describing conditions in New Hampshire to Federal authorities, reported: “Almost all the whisky and some drugs are adulterated.” Pichette’s rectified house brands were "Cavanaugh" and "Valley" whiskeys, the samples carried away by the stranger. 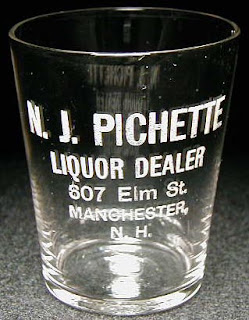 Enter government authorities. In 1906 the U.S. Congress had passed what became widely known as the Pure Food and Drug Act. It raised the consciousness of the Nation to the adulteration of food and beverages. While the Act did not forbid adding ingredients, it required that they be listed on the label. New Hampshire had similar laws and the agent purchasing the whiskey had been from the State Department of Agriculture, where food testing laboratories were located. 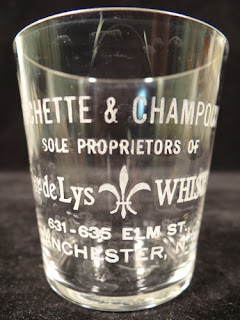 The results of the State tests were published in the Department’s
1909 annual report. Pichette’s liquors were among those censored. Cavanaugh Whiskey had been found to be a “compound,” that is, a combination of ingredients. Much more serious, Valley Whiskey was tagged as “heavily watered, with a peculiar odor.” Obviously this was a “drink at your own risk” concoction. The report gave no idea of what, if any, fine Napoleon paid.

Pichette continued to be in business with enough volume to issue embossed bottles, as shown here. By the time of a 1916 city directory he was running the establishment alone but had added beer to his list of products. He also issued giveaway shot glasses. His flagship brand became “Superior Little Whiskey” with his own logo on the label. It cited specifically that this whiskey was in compliance with the National Food and Drug Act. The emphasis would suggest that Napoleon was attempting to resurrect his reputation after the State rebuke.

The Little Whiskey brand, however, has its own peculiarity.

Pichette claimed a trademark but none shows up in federal records under his name. Rather, the brand had been registered with the government in 1905 by J. & A. Freiberg of Cincinnati. Was Napoleon now violating the trademark laws? Was he skirting them by adding the word “Superior” to his whiskey? There is no record of any court action against him by the Freibergs.

With the coming of National Prohibition, Napoleon Pichette was forced, as thousands of others, to shut down his business. He died in Manchester not long after, in 1925 at the age of 51. Can we assume he never disclosed the source of the “peculiar odor” wafting from his whiskey?
Posted by Jack Sullivan at 6:41 AM