Florida’s Harry Metcalf Had a Case for the Courts 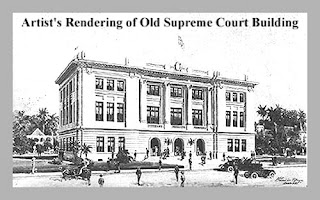 Harry W. Metcalf,  a Florida pre-Prohibition liquor merchant, frequently had a case, but not of whiskey, for the courts of justice.  The Florida State Supreme Court building in Tallahassee, shown here, must have seemed like a second home to him.  He won, he lost, but he always seems to have prospered.

Metcalf was born at the tail end of the Civil War in 1864, probably in Florida, then a frontier area.  HIs early life is not recorded but by 1887, at the age of 23 he listed as running a saloon in Jacksonville on Orange Avenue between Pine and Church Streets.   The same directory three years later records him as operating a saloon and restaurant at 132 W. Forsyth.  An 1893 directory calls him a dealer in wines & liquors.  He also appears to have branched out into business in Orlando, running a saloon there as early as 1892.

Orlando was the scene of Metcalf’s first court fight.  In 1907 an election was held to determine if the sale of intoxicating liquors, wines and beers should be prohibited in Orange County.  The Commissioners certified that in the the election 592 votes had been cast against liquor sales and only 589 for them.   Given the several million people living in Orlando and the county today, it is hard to imagine the small numbers that participated in the vote.  His saloon in jeopardy, Metcalf took the Commissioners to court, charging that the election was rigged and the results should be voided.  In a 3-2 split decision, the Florida Supreme Court  agreed with him and nulled the vote.  His saloon stayed open.

Metcalf subsequently put his emphasis in Jacksonville, Duval County, one of only two Florida jurisdictions to buck the Prohibition tide.  According to Historian James B. Crooks  Duval didn't ban the sale of liquor for two reasons:  (1) Prohibition largely depended on support from white evangelical Protestants.  Jacksonville, on the other hand,  contained a relatively large number of Catholics, Jews, German Lutherans, and Episcopalians who often were opposed to banning alcohol.  (2) Money talked in the Gateway to Florida.  Prohibition met opposition from merchant mariners, hotelkeepers, restaurateurs, and other business people who dealt with trade or tourism.  One of them surely was our Harry.

He took advantage of the Jacksonville freedoms to build a large mail order business, sending whiskey into those many parts of the South that had voted dry but still could obtain liquor through the post office.  A flyer from The H. W. Metcalf Co., Inc., shows his mail order department at 1209-1219 Forsyth Street and his 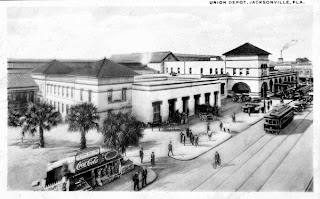 executive offices and retail outlet at the corner of Bay and Lee Streets.  The Forsyth building was conveniently located right across from the train station, shown here.  No evidence exists that Metcalf owned a distillery and the facility shown in the flyer likely was a flight of fancy.

Metcalf featured a number of brands, claiming a thousand, including some under his own label.  Prominent among those were “Springwood,” “Briar Cave Rye,” Crisco Corn Whiskey,” “Sikes 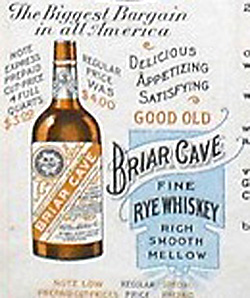 Malt Whiskey,” and “Kentucky Spray,” for which he issued the corkscrew shown here.  In 1915,  his Forsyth Street establishment was the target of thieves who sawed through the iron bars of the warehouse and meticulously hauled away 1,500 quarts of Briar Cave Rye and nothing else.  They worked under the tumult caused in Jacksonville by an election night rally involving a band, fireworks and high wire artists.  The culprits were never caught.

The same year found Metcalf back in the Florida Supreme Court.   In 1913 he had taken a five year lease on space in the Terminal Hotel, located on Bay and Johnson.  There he ran a saloon and package liquor store.  The Florida Legislature, in another move toward Prohibition,  passed what became known as the Davis Package Act.  It decreed that a business selling liquor by the bottle could not on the 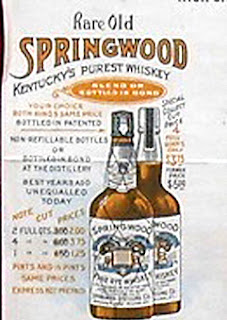 same premises sell liquor by the drink.   With other affected whiskey men,  Metcalf fought the law right up to the State Supreme Court.  This time he lost; the law was declared valid.

Ever the canny businessman,  Metcalf had included a provision in his lease for the hotel space that if such prohibition laws were enacted the lease could be nulled.  When the Davis Package Act was allowed to stand,  he broke the lease and was taken to court by the landlord.  When the lower court ruled for the landlord, Metcalf, now very familiar with the Florida Supreme Court,  appealed the case there and won.

Even as the state and national tides of Prohibition swept around him,  Metcalf stayed in business until 1919 and then shut down his business.  Over his 32 years in the liquor trade,  he had become very wealthy and began to invest in real estate.  One of his purchases was a citrus grove near Orlando,  growing grapefruit, tangerines, oranges and valencias.  In 1930 he also 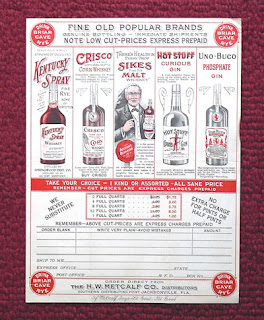 bought for $120,000 a premier office building in Orlando, shown here.  He renamed it the “Metcalf Building.” It currently is on the city’s historic walking tour.

Metcalf’s “last hurrah” in the courts was in 1939.  He was 77 years old. He sued to void a deal in which he had sold some road bonds, then in default, to speculators in return for warehouse receipts representing 400 barrels of whiskey.  When the bonds suddenly became valuable and were sold at a huge profit,  Metcalf claimed he had been 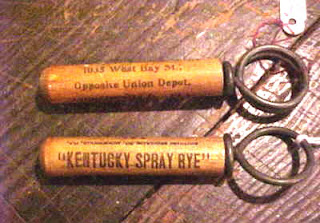 cheated.  This time the Florida’s highest court upheld a lower court ruling that dismissed his complaint.   That was the last time he shows up in official records.

Personal details about Harry Metcalf are scanty. Much of what we know about him comes from court records.  There is no information about his family life, social activities, his movements between Jacksonville and Orlando, or when he died and where he is buried.  As information is obtained about him, it will be added to this vignette.  Who knows, some of it may be lying 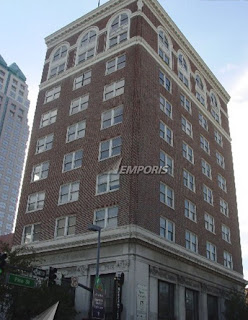 on a dusty shelf in a Florida courthouse.
Posted by Jack Sullivan at 1:17 PM