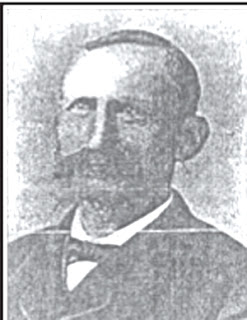 The production of whiskey before the American Revolution was insignificant.   Rum was the drink of choice for our rebellious forefathers.  But rum had to be imported from the Caribbean and was expensive.  What lay at hand in the USA were abundant fields of rye, wheat and corn.   Recognition spread that a good way to add value to a ton of grain was to turn it into gallons of whiskey.   Often the farmer who grew the crop also did the distilling.  Levi Price of Maryland, shown here, epitomizes that farmer-distiller.

Levi Price was born on October 22, 1835, in Frederick County, Maryland,  in what was then the Urbana District, near the present community of Hyattstown.   His father was Elijah Price,  a well-known farmer who himself had been born in that locale.  His mother was Sarah Ann Wolfe.   There is little information on Levi Price’s early life and education but he showed early signs of being a canny businessman.

In an article on the distiller in the Sept. 30, 1904, “The Citizen” newspaper of Frederick City,  the anonymous author claimed that when Price launched himself into business in 1858 at the age of 23 he had only 93 cents to his name.  His initial enterprise was to rehabilitate an old mill where he began a small flour milling operation.   Its financial success apparently allowed him to woo and win Laura Virginia McElfresh of Hyattstown.  Ms. McElfresh was related to an old and distinguished Virginia family with ties to Revolutionary War stalwarts.   She would bear him 10 children -- three sons and seven daughters.

Price’s milling venture proved so successful that in 1867 he had the financial strength to build a three story high distillery at the point where Bennett Creek crosses Green Valley Road.  Shown here, the site is 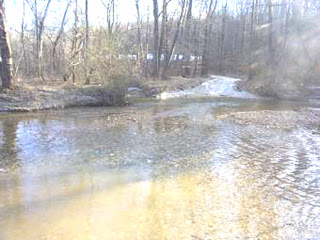 still called “Price’s Ford.”  He seems to have succeeded rapidly in the whiskey trade. The 1904 newspaper states:  “Levi Price has undoubtedly engaged in a business which he is well suited for,  and long years of experience and an accurate knowledge of grain has helped make him what he is.”

In 1879 Price built the Green Valley Flouring Mills and began manufacturing a product he called “Fine Family Flour,”  a product that commanded a substantial regional market. For a time he operated a general merchandise store in 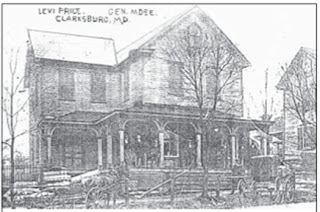 nearby Clarksburg MD.  He also bought up surrounding acres,  probably to grow sufficient grain for his distillery and mill.  At his death he owned 525 acres of prime farm land.  But it was whiskey that made Levi rich.   His principal brand,  called “Pure Rye Double Copper Distilled Whiskey,”  not only was popular locally but had a regional and eventually earned a modest national reputation.

Price’s profitability may have resulted from some innovations he made in the distilling process itself.   He recognized that any form of adulteration led to objectionable tastes common in the newly made, “raw” whiskey of his day.   By using care in the cleanliness of his process and perhaps a “secret” method or two,  he apparently was able to manufacture a product that had the taste and smoothness of an aged whiskey while being newly distilled.   By eliminating most of the aging process,  he saved money and was able to sell his whiskey for less than the competition.

In 1878,  as sales rose and the production of his Maryland rye at an all-time high,  Price talked the 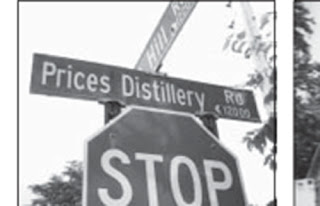 county into constructing a road that ever since has borne the name of his distillery.   The road ran north to Ijamsville MD where a railroad station was located and south to Damascus in Montgomery County.  There it linked with other roads that led to Washington, D.C. and Baltimore.   Buyers from as far north as New York City could take the B&O  (now CSX) train to Ijamsville or Monrovia MD and reach the farm distillery by horse and buggy.

To cater to these travelers,  Price converted a 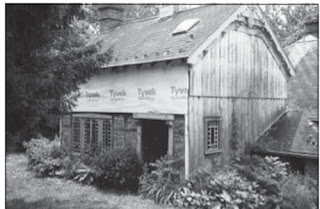 cottage that stood near the distillery on Green Valley Road into the distillery office and an overnight guest house.  By the time the whiskey had been tasted and business transacted,  it often was too late for buyers to return to the evening train.  They were offered a place to stay at the rear of the cottage.  They also ate at the Price family table.

The cottage, shown here in renovation,  which dates from the  1860s,  still stands.  It is known widely as “Thistle Hill” -- perhaps because of its stained glass windows  -- and is on the Maryland historical register.  It features an overly wide front door that may have been constructed to accommodate barrels of whiskey being rolled in and out.  Near the cottage are the ruins of a barn that was used to house the horses needed to transport the whiskey barrels to the railroad stations.  Still standing is Levi Price’s house, shown here, a large frame structure on the bluff overlooking the creek. Field stone slave quarters loom behind.  The Levi Price house, which has been restored at least twice,  also is on the Maryland historical register.

Perhaps compensating for his own lack of formal schooling, Price is reported to have invested heavily in his children’s education. None of them, however,  appear to have involved themselves in the distillery operations.  Preceded in death by his wife in 1902,  Price died in 1909 at the age of 74.   His progeny were not willing or able to continue the business and it was soon sold to another party -- Reuben Lichtenstein.

Lichtenstein was not a farmer-distiller.  Born in 1838 in Wolfernheim, Germany,  he came to the U.S. at the age of 14, settling in Virginia.  He joined the Confederate cause and served as an infantryman in the 19th Virginia.   After the war Lichtenstein moved to Cumberland, Maryland,  and opened a liquor business.  Like many other whiskey distributors and dealers,  he seems to have hankered to own a distillery.  When the Price operation came on the market shortly after Levi Price’s death,  Reuben purchased it,  along with the Levi Price house which he sold shortly thereafter.

Evidence is that Lichtenstein directed the distillery from afar,  continuing to live in Cumberland.  Lichtenstein also is reported to have rebuilt and expanded the distillery.   His marketing materials named “Levi Price Pure Rye”  as his flagship brand and cited it as the product of the Lichtenstein Co., Distillers, Cumberland.  It is shown here on giveaway pen knife.  Also shown here is a paper labeled Levi Price quart brand whiskey that bears Lichtenstein’s name.  The label claims that the distillery was founded in 1840.   This clearly is a fabrication since Price would only have been five years old in that year. 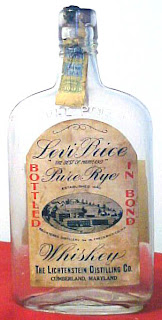 Although Reuben died at the age of 77 in 1916,  before the onset of Prohibition,  one or more of his five sons kept the operation going for the next four years.  Here the picture grows murky about the fate of the distillery.  Some locals say the family sold off its stored whiskey in the 1920s and ultimately the distillery was torn down.  A far more interesting fate is the one most widely believed by neighbors.  When Prohibition ended in 1934,  the story goes, the Lichtenstein boys attempted to put the distillery back in operation.   The move enraged “Drys” in nearby Hyattstown,  already smarting from Repeal.   They set a wagon full of straw on fire and rolled it downhill into the distillery.  It reputedly burned to the ground.

This is the account believed by local historian Edward Lee Knowles, who himself was a subsequent owner of the Levi Price house.   To a reporter in 1978 he showed how the earth around the distillery site was full of charred wood,  indicating a fire.   This version also appears in a publication of the Friends of Historic Hyattstown.  But even Knowles admitted that his search of local newspapers of that time revealed no mention of the distillery burning.  Was it hushed up?  As a result,  what happened to the farm distillery that Levi Price founded continues to be something of a mystery.