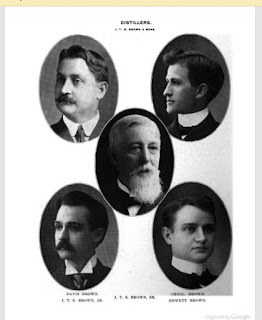 John Thompson Street Brown,  otherwise known as “J.T.S.,” was progenitor and part of a Brown whiskey-making Kentucky family that left a strong mark on the industry as the generations advanced.   Among them is reputed to be the first woman  in American history known to have had a management role in a major distilling operation.

Born in 1826,  J.T.S. was part of three generations of Browns in the Bluegrass State. His grandfather, William, had emigrated with a young wife, Hannah Street, from Virginia,  settling down as a planter and merchant.  His son, John, was a merchant, postmaster, and officer in the Confederate army who married twice.  J.T.S. was a product of the first marriage.  Knowledge is scant about his J.T.S.’s education, but he appears to have worked closely with his father in his mercantile business.

At age 26, experienced in commerce and trade,  J.T.S.  moved from rural Kentucky to Louisville,, his home for the remainder of his life.   There he entered into the wholesale liquor business with an old school chum named Joseph Allen.  He also met and fell in love with a 16-year-old girl named Emily Graham,  the daughter of a prominent local tobacco dealer.   Married in 1856, they would go on to have eight children over the next 13 years, six boys and two girls.

In 1857 Allen withdrew from the partnership and J.T.S. assumed full control.  His company expanded greatly during the Civil War as he provided liquor to thirsty troops and by 1864 he had amassed a considerable fortune.   Meanwhile in 1863 his half-brother, George Garvin Brown,  younger by 17 years,  had come to Louisville to go to school and was invited into the firm.   With help from a patron of George’s, named Chambers,  the company relocated to larger quarters at 322 Main Street in Louisville, at the heart of the city’s Whiskey Row.  The company became J.T.S. Brown and Bro.

The Browns reportedly purchased quality straight whiskeys from J.M. Atherton Co., (the Atherton and Mayfield distilleries), the Mellwood distillery in Louisville and J.B.Mattingly at St. Marys in Marion county. They blended these spirits and sold them in the form of barrel goods as "Sidroc Bourbon", "Atherton Bourbon", and "Mellwood Bourbon.”  In 1874, for reasons still unclear, the partnership ended.  Some accounts say that the half-brothers could not agree on the quality of whiskey to be sold, with George favoring a higher priced quality liquor, while J.T.S. was more interested in generating a wider customer base with cheaper whiskey.  George moved out to form his own company and whiskey dynasty, still extant as the Brown-Foreman Company. 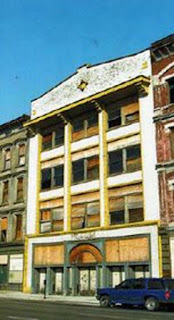 Meanwhile J.T. S.’s boys were growing up and coming into the firm with their father.  The first three were the eldest, Graham; the next in the birth cohort, Davis, and J.T.S. Jr.  The firm name was changed to J.T.S. Brown and Sons.  Although Graham later would leave the firm,  younger brothers, Creel and Hewett would join.  Eventually the Browns moved their wholesale warehouse and bottling operations to nearby 105 Main Street,  shown right.  At the same time they purchased a large distillery of their own at McBrayer, near Lawrenceburg, on the Salt River in Anderson County. It is shown below: 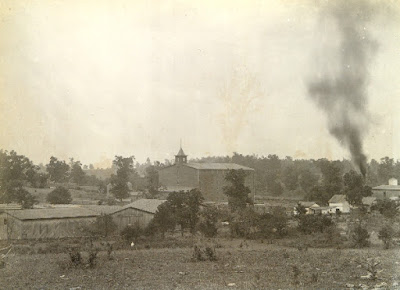 At this distillery, shown here, the Browns produced several brands of whiskey including "J. T. S. Brown", "Old Lebanon Club,” "Vine Spring Malt, “ and  “Old Prentice.”  The latter label appears to have been originated by prior owners of the facility and reputedly was named for a Kentucky Confederate firebrand politician by the name of “S. S. Prentiss.”   Whatever its origin,  the J.T.S. and his four boys made it their flagship brand and dated it back to 1855. 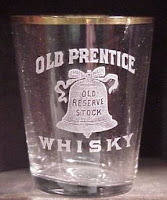 They bottled it in label-under-glass quarts,  and featured it on giveaway items to special customers.  Those included, as shown here, back of the bar bottles, minis shaped like the Old Prentice bell trademark, and shot glasses.  They also advertised it with racially insensitive ads.

In 1904, Emily Brown, age 65, died, much mourned by her family and was buried in historic Cave Hill Cemetery where many of  Louisville’s rich and famous of yesteryear are interred.  About a year later,  J.T.S.., on his way home from work at the liquor store was stricken on a streetcar and died two weeks later at age 76.  He was buried next to Emily in the Brown family plot.

Without changing the name of the company, the Brown boys fully took over its management.  Davis became president,  Creel vice president,  J.T.S. Jr. secretary and Hewett treasurer.  The year of their father’s death they opened at new headquarters adjacent to the old at 107-109 West Main, shown here. 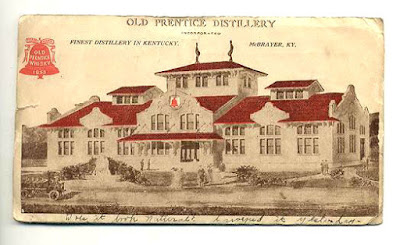 They also built a new distillery across the road from their original complex at McBrayer.   Currently on the National Register of Historic Buildings,  it is considered a well-executed example of Mission Style architecture used for an industrial production facility.  Built in 1910-1912 when this style was popular nationally, it used a low pitched roof and large arched windows to provide the space and light needed.  Shown here in a postcard view, its interior was divided into two large processing areas,  fermentation on one side, and cooking/distilling on the other.

During Prohibition the family shut the business down.  In 1932 Davis Brown died, leaving his widow, Agnes Fidler Saddler Brown, shown here, with a management stake in the business, according to some sources.  She is credited with being the first woman in American history to have had a role in running a distillery, a business almost totally dominated by men at the time.   When Repeal came, however, it was Creel Brown’s son, Creel Jr., who revived the firm.   He ultimately sold the business in 1955.  The J.T.S. Brown brand of whiskey has survived down to the current day.  Its label pictures J.T.S., Creel Sr. and Creel Jr. -- just part of the whiskey-making Brown Kentucky Clan.

Posted by Jack Sullivan at 1:46 PM