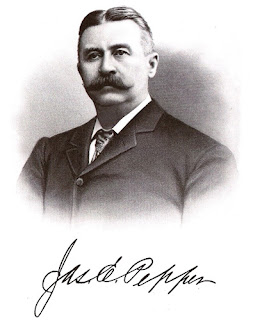 James Pepper of Lexington, Kentucky, claimed that his whiskey could be dated to the year 1780,  smack in the midst of the American Revolutionary War.   His grandfather, Elijah Pepper, sometimes was credited with beginning the first distillery in Kentucky,  a claim that might have been disputed by others but never by his grandson.   As a result, as shown below,  Pepper’s merchandising, including signs, trays and tokens, that stress the Nation’s first war.  As will be explained later, however, the real revolution for his whiskey may have occurred after his death.

The story of Pepper whiskey and his Henry Clay distillery has been told well by William Ambrose in his 2002 book “Bottled in Bond.”  In keeping with my policy of not repeating  material that has been well done previously,  I will quote Ambrose for the bulk of this vignette but first set the scene:  Pepper who had already run a Kentucky distillery owned by his late father, Oscar, sold it,  went East to learn the wholesale liquor trade, returned to Kentucky in 1878, and teamed up with a  wealthy Kentucky businessman named George Starkweather.  Starkweather recently had bought the defunct Henry Clay distillery located in Fayette County, Kentucky.  Ambrose picks up the story in 1880: 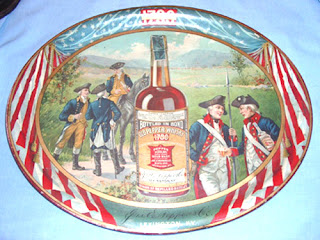 Starkweather then established a partnership with Colonel James. E. Pepper and the pair reestablished a distillery on the site. Pepper designed the distillery and the layout of equipment and he hired local architect John McMurty to translate these ideas into plans and specifications. 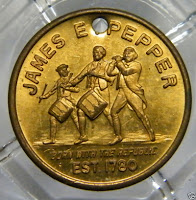 Pepper installed four steam boilers to provide heat to the mash tubs and stills at a time when many distilleries were still using open flames for heat. In addition, he installed two steam engines of 125 hp each to supply power. The engines drove a series of shafts throughout the plant and these powered the machinery through a series of pulleys and belts. He purchased a six roller mill, also powered by belts, to grind his grains into uniform consistency. He designed rows of windows on two sides of his plant to allow ventilation and lighting. These designs, while not revolutionary, allowed the distillery to operate with higher efficient, improved yields and uniform quality. Moreover, it allowed him to distill a consistent, higher grade whiskey that was his hallmark. 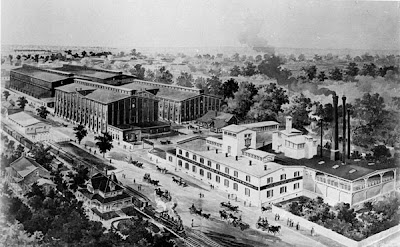 The plant was finished in April with a capacity of 28 barrels (roughly 300 bu) per day. They produced "Old Pepper Whiskey" and "Old Henry Clay", a Rye whiskey.

In September 1880 the company let bids for the construction of two bonded warehouses. Both warehouses were roughly 9,000 sq. ft, four stories high and projected to hold 10,000 barrels of whiskey. The foundations were of stone, walls of brick and roof of iron clad. The first warehouse was finished in late 1880 and the second finished in early 1881. 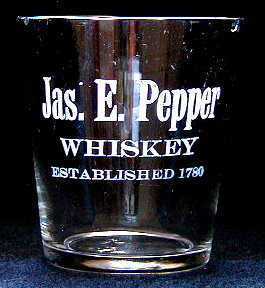 Water for the distillery was supplied from the farm of Colonel Wilson - with a basin of 75 feet square - and conveyed to the plant by a 5" pipeline. Two pumps supplied 1,000,000 gallons per day. The plant also maintained 500 head of cattle fed from the sillage.

The Louisville, Cincinnati and Lexington Railroad (later Louisville & Nashville Railroad) had tracks on both sides of the plant, with a siding into the distillery on the Frankfort Pike side. 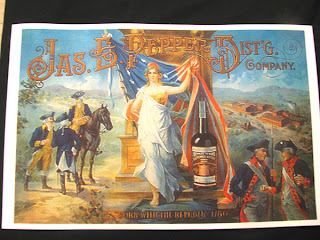 In February, fire destroyed the cattle sheds and pens with a net loss of $4,000 to $5,000. The incident was fully covered by the Western Insurance Company.

1883: Starkweather died in December and Pepper acquired his interest for $70,000. He then sold half his stake in the company to Colonel William S Barnes of Lexington, Kentucky. Both Colonels Pepper and Barnes traveled around the United States promoting "Old Pepper" whiskey. Colonel Pepper concentrated on the East Coast, especially New York, and Colonel Barnes promoted in the North and West, especially in the Chicago area.1886: The company began bottling "Old Pepper" whiskey in quarts and pint flasks. The entry into the bottling business was to counter the rectifiers that blended whiskey with cheaper substitutes and sold the product under the Pepper name.
1889: The bottling trade was so successful that the company faced a shortage of aged whiskey. They purchased 1,000 barrels from the Wm. Tarr & Co.'s Ashland Distillery and 500 barrels elsewhere. This was blended under Colonel Pepper's supervision with the existing stock of "Old Pepper" whiskey.
1891: In July, Pepper brought out Barnes for $100,000 in cash and brood mares. Over the ten years, Colonel Barnes had taken out $250,000 in profits; receiving $25,000 to $30,000 annually from his interest.
1892: In January, Pepper closed out all of bottling contracts with independent brokers. The following year, Krauss, Hart, Felbel & Company became the exclusive dealer in bottled "Old Pepper Whiskey" nationwide, except for California . The contract specified that they would purchase 30,000 cases of bourbon, 1,000 barrels of bourbon and 200 barrels of rye whiskey each year. 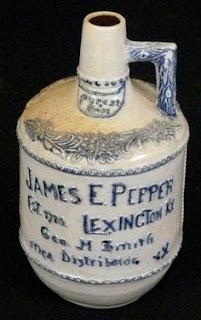 At that time, it was being operated by Jas. E Pepper & Co.

On September 12, the cattle pens were again destroyed by fire. The distillery had ceased production the previous month and arson was suspected because of several small fires around the distillery over the past few months. Damages were limited to several thousand dollars.

1893: An economic depression began that lasted five years and caused Pepper's thoroughbred investments and the value of whiskey stocks to fall dramatically. As a result, the company was placed in receivership (April 15, 1896).

1896: On September 19, the distillery was sold at public auction to Mrs. James E. Pepper for $43,142.69. She paid for it in cash from the prize purses of her thoroughbred stable. 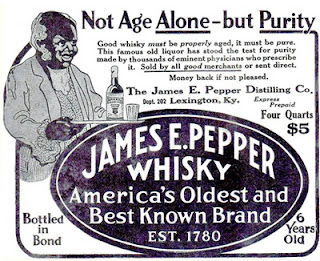 In December, Jas. E. Pepper & Co. was organized, with $150,000 in capital. Colonel Pepper owned 2,994 shares, John G. Offutt (his bother-in-law) and Charles O. Johnson (bookkeeper) owned three shares each. These allowed them to quality as directors under the laws of the time. The company was authorized to "engage in the manufacturing, handling, selling and dealing in distilled spirits at the old distillery, formerly run by James E. Pepper, and in buying, feeding and selling of cattle and hogs".

1897: On February 9, Mrs. Pepper transferred the plant, equipment, stock and other assets purchased at auction to the new concern. The company issued $150,000 in bonds that matured in five years at 6% interest, payable in gold coins and secured with a first mortgage on the company assets. The assets included the Old Pepper Distillery and the trademarks of "Genuine Old Pepper", "Henry Clay" and script signature Jas. E. Pepper & Co. The financing allowed the resumption of operations and the next day the company resumed distilling bourbon. The officers at this time were James E. Pepper (President), A. G. Kinsley (Vice President) and James G. Hubbell (General Manager and Secretary & Treasurer). Mr. Kinsley represented the Harrisburg Trust (who issued the bonds) and the bank placed Mr. Hubbell at the distillery to oversee the financial side of the operations.

1898: Over the next year, Colonel Pepper had constant disagreements with his "overseers" from the trust company. In October Hubbell attempted to take control of the distillery by securing the bonds, but in November 1898, Mrs. Pepper purchased a majority of the bonds, again using winning purses from her thoroughbred stable. Hubbell made one more attempt to secure control of the distillery, by having the Harrisburg Trust declare the bonds in default and have a receiver (Mr. Hubbell) appointed. In February 1899 the court refused to appoint a receiver and sided with Mrs. Pepper in replacing the Harrisburg Trust as Trustee.

1899: In February, Warner S. Kinkead was hired as the distillery's Vice President. Mr. Kinkead was an attorney and assumed the business affairs of the company. He was former U. S. Consul to the UK and was married to Mrs. Pepper's sister. Eventually he would become the General Manager of the distillery.

Pepper continued to operate the distillery until his death in December 1906.

This ends the excerpt from Ambrose.  The following year a group of Chicago investors acquired the distillery from the Pepper estate,  improved the distillery and bottling operations.   It was their marketing that coined the slogan, “Born with the Revolution.” After the United States entered the First World War, the Federal government rationed barley grains stocks. The Pepper plant distilled for the last time on November 11, 1918, when the wartime restrictions on grain forced production to stop.  Under different ownerships the James E. Pepper brand continued after Prohibition until phased out in the 1960s. 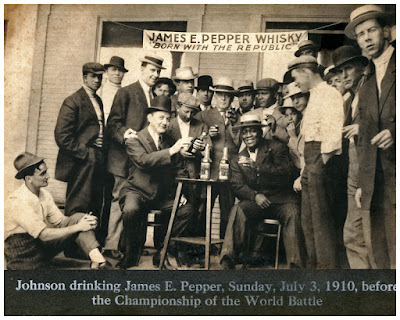 To me the real James Pepper revolution was in a different realm.  It occurred four years after the death of the founder.  Note here an ad in which the African-American waiter is shown in a typical position of servitude.   Compare it with the last image shown here.  It is a Pepper whiskey publicity shot of Jack Johnson, the first African American world heavyweight boxing champion. In 1910 the former undefeated heavyweight champion James J. Jeffries came out of retirement as “the Great White Hope” to challenge Johnson. It was called the “Fight of the Century.”  Johnson beat Jeffries handily.   The Pepper advertising clearly was making Johnson a hero at the height of the Jim Crow era.  That, indeed, was truly revolutionary.