The Magullions: Up from Shanty Irish 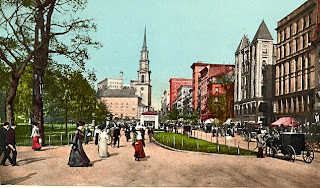 Brothers Frank and John R. Magullion, noted Boston whiskey dealers, epitomized the upward mobility that the Irish achieved in America in the mid-19th Century.  Their parents, Patrick and Ann, were immigrants from Ireland in the 1840s,  probably from County Leitrim where Magullion is a familiar name. Their father, who may have been illiterate, was a laborer.  The family would have been considered “Shanty Irish” by the Boston Brahmins.

Neither Frank, born in 1850 in the Roxbury district of Boston, nor John, born in 1853, received more than a rudimentary education.   In his obituary, Frank was described as having attended elementary school but having quit school at an early age to go to work.  John was termed after his death as “a man of little education.” 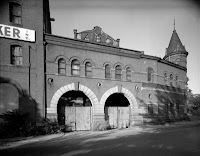 Frank, while still in his teens left working in a sewing machine factory to become a watchmaker.  After four years at that trade, he had save enough money to open a liquor store.  This was circa 1870 when he would have been about 20 years old. His first location was on Washington Street in Boston.  As the enterprise proved successful he moved his company to one of the city’s more fashionable avenues, Tremont Street, shown here.  This location at 496-498 Tremont, corner of Dover Street, would be the home of the Magullion liquor enterprises for decades.

The 1880 census found both Frank, 30, and John, 27, living at home with their widowed mother, Ann Magullion,  and other siblings.

Also in the household was Hannah Magee,  a spinster who likely was a sister of their mother.  John was working in the liquor store with his older brother. Although Frank remained a bachelor all his life,  John was married early in the 1880s to Catherine, like himself of Irish descent. Their first child, a girl, was born in 1884, the first of five daughters, and in 1891 at last, a son. 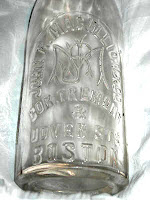 Meanwhile Frank was rising rapidly in the liquor trade and Boston business circles.  His wholesale and retail liquor trade was conducted, his obituary stated, “on a large scale.” He also had been instrumental in forming the American Brewing Company, a Boston brewery whose original buildings are shown here, and had served as its president since its organization.  Frank Magullion was cited as a honored member of the Charitable Irish Society, the Boston Lodge of the Elks, the Wholesale Liquor Dealers Assn. and past president of the Boston Highland Mutual Relief Society. 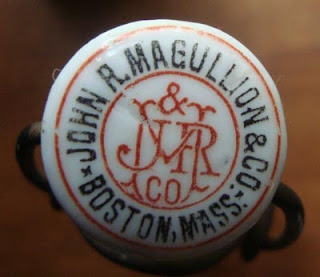 While still in his early 40’s,  Frank’s health began to fail and although he made a trip to the American West in an effort to restore it, he continued to be ill.   He returned to attend to his business interests, but took a turn for the worse in the autumn of 1894 and died.  At the time he was living on Dudley Street with the elderly Hannah Magee.  Frank was buried from St. Joseph’s Church and interred in “Old” Calvary Cemetery in Boston.

As Frank faltered, John, who also had achieved a reputation as a Boston businessman,  increasingly was involved in managing the liquor business.  Upon Frank’s death, he took it over and the John R. Magullion firm that same year made its appearance in Boston business directories, located at the Tremont Street address.  The new owner was described as “a man of many friends”  who “devoted his time and efforts to procuring patronage and customers for the business.” 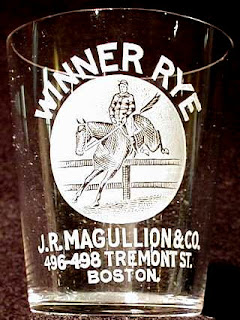 Under John’s leadership the firm issued several popular whiskeys,  blends probably mixed up on his own premises. They were “Winner Rye,” and “Old Ironsides Rye,” the latter celebrating the U.S.S. Constitution, docked in Boston Harbor.  Magullion sold those brands in embossed bottles, including one showing a second address for his firm at Columbus and Massachusetts Streets in Boston.  Many of his liquors were sold in stoppered bottles, also heavily embossed.  The ceramic stoppers displayed Magullion’s colorful logo. He also showed imagination in issuing giveaway shot glasses.  They included etched images of a horse and rider jumping over a fence for Winner Rye and a three-masted ship for Old Ironsides Rye.

Meanwhile in the early 1890s,  John’s wife, Catherine died, leaving him with a family of six young children to raise.  He soon found a new wife, a woman named Mary some 12 years his junior.   She would bear him another daughter.  John left raising the children to Mary and concentrated on business.  In 1905  Boston records show that the City Council allowed him to erect an illuminated sign at his Columbus Street outlet.  In 1908 the State of Massachusetts agricultural officials accused him of watering down his whiskey.  He was convicted and paid a fine. 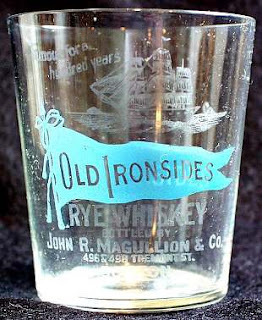 Lacking a male heir old enough to assist him in the Magullion Co., John turned to John E.F. Magee,  likely his cousin, a man 18 years younger.  He made Magee a partner, with the responsibilities of a business manager.  The younger man apparently had some training in accounting, something John lacked.  It was Magee who filed for trademark protection for Magullion’s “Old Ironsides” brand of whiskey in 1907.  The arrangement  apparently worked quite well while both men were living.  Upon John’s death about 1916, however, a family feud erupted.

Mary Magullion, the grieving widow, with a second trustee of Magullion’s estate, sued Magee in 1917. They claimed that, without her husband’s knowledge, Magee had purchased a building adjoining the Tremont office at 6 Dover Street and leased it back to the company.  They claimed that Magee had full control of the Magullion Company finances and had bought the building with company money.  The trustees asked that a half interest in the Dover street building be conveyed to them.   A judge in the Superior Court of Suffolk County believed Magee’s defense that Magullion knew about the building purchase and agreed with the lease arrangement.  Unsatisfied, Mary and the estate took the case to the Supreme Judicial Court of Massachusetts.  After a brief trial the lower court verdict was affirmed.

In rejecting the widow’s complaint, the judge opined of Magullion that despite his lack of education, he appeared to be “well fitted” for the liquor business. That would be a fitting epitaph for both John and Frank, Irish-Americans with whiskey as their trade who had risen from the shanty to the ranks of leading Boston businessmen.