For Frank Detrick the Motto was the Message

J. (for Jacob) Frank Detrick, the founder of the Detrick Distilling Company of Dayton, Ohio,  clearly was interested in providing advice both about life and about drinking.  Detrick began his business about 1885 grinding wheat and corn under the name Detrick Milling Company. It was located in Tippacanoe City (now Tipp City), a town of about 6,000 a few miles north of Dayton.   With excess grain able to be fermented, it was almost a natural move to distilling and by 1897, the company was renamed the Detrick Milling and Distilling Co.

Frank the founder showed a real genius for marketing --  with mottos always in the fore. He put them on his jugs,  postcards and brochures.  Detrick’s  pre-Pro distillery issued a dozen different motto jugs.  They are almost uniformly four 1/2 inches high and 2 1/2 inches in diameter.   The containers are heavy stoneware with Albany slip tops and Bristol white glaze bottoms. No mark identifies the pottery.  As shown here,  they come in two styles.   Both say “motto jug” but the older has larger type, often in uneven lines.  The new style keep things within a rectangular label.   They are part of a set of 11,  which can be divided into three categories:  downright philosophical,  pep talks, and slogans keyed to the whiskey contents. 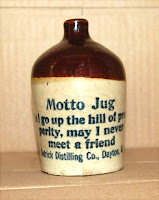 “Toast jug” was another name Frank Detrick gave to his small ceramics.  In an era before the idea of

“collectibles” was invented,  he was promoting these jugs as souvenirs.  In a company brochure he described them this way:  “They make very acceptable ornaments for your library,  den or dining room.  Besides each jug is filled with the celebrated Detrick’s Special Selected Whiskey -- enough for five or six good drinks.” (Author’s note -- not really.) Detrick provided these stoneware containers to mail order customers for buying full-sized bottles of his whiskey,  rock and rye, brandy and other alcoholic products.   If a customer ordered one gallon of liquor he received one motto jug as a bonus;  three gallons and he could choose four. 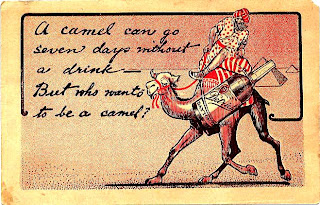 Detrick used other media for getting his message across. Shown here is a Detrick marketing postcard showing a camel carrying a bottle of whiskey and carrying this message:  “A camel can go seven days without a drink....But who wants to be a camel?”  A 1909 Detrick ad states:  “Quality not quantity our motto.”  Another slogan was “Fine old whiskey for medicinal use.”  Detrick’s love of snappy sayings was also evident in a booklet he issued to advertise his products.  Under the heading,  “toasts worth knowing,”  he served up,  among others, the following:

“Here’s to our wives and sweethearts!  May they never meet!”
“Here’s to the happiest hours of my life.  Spent in the arms of another man’s wife.   My mother!”
“He who loves not wine, women and song, remains a fool his whole life long.”
“Let’s have wine and women, mirth and laughter;  sermons and soda water the day after.” 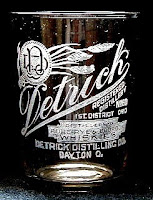 Most of Detrick’s business was done through mail orders not only in Ohio but throughout the United States.  Detrick also gave away other merchandise to favored customers including a series of shot glasses and as a sales gimmick distributed an “introductory sale certificate” worth fifty cents in merchandise.   He signed it “J. F. Detrick, President and Gen’l Mgr.” 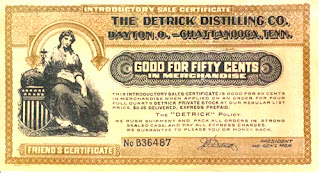 The Detrick Distilling Co. retail store and mail order department was located at 313-315 East First Street,  shown here. By 1908, he was shipping from 35 S. Ludlow Street. The company also had a branch in Chattanooga, Tennessee, listed in the 1912 and 1913 directories at 225 East Eleventh Street.  With the onset of Prohibition, Detrick returned to milling under the name of the Detrick Grain and Mercantile Company.

As for Detrick’s personal life, from U.S. Census data it appears that he was born in Ohio about 1856.   In 1885 at the age of 29 he married a woman named Mary (also recorded as Marietta), who like Frank was a native of Ohio.  The 1900 census found them living in Tipp City, without any children present.  Frank gave his occupation simply as “grain dealer,” with no mention of whiskey.  The 1920 census found the family in Miami, Ohio.  Frank, then 64, was listed as a “retired grain dealer.”