Charles Froeb: From Booze to Banking in Brooklyn 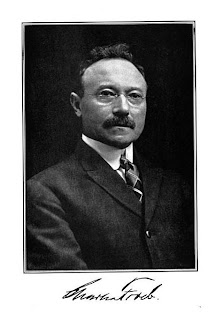 Charles Froeb, an immigrant to the United States as a teenager, founded a highly successful liquor business in Brooklyn and used it as a springboard to an equally successful career in banking.  Other whiskey men moved into banking once Prohibition forces shut them down, but Froeb, shown here, must be accounted among the most notable.

Charles was the son of Peter, a barber, and Catherine (Becker) Froeb.  He was born in 1857 in the town of Waechtersbach, Hessen-Nassau, Germany.  The town, shown here,  lies between the Spessart and the Vogelsberg Mountains in the middle Kinzig valley at the edge of the Büdingen Forest. Waechtersbach is  famous for the brightly colored porcelain coffee cups and other dinnerware that are made there at the Waechtersbach Ceramic Factory, founded in 1832. Froeb received his early education in his home town and then was sent to secondary school in Frankfort-en-Main.

In 1872 the Froeb family -- father, mother and five children -- emigrated to America, settling in Brooklyn.  Charles went to night school,  learned to speak and write English,  and early on went to work in a wholesale liquor house on Murray Street, New York City. He remained employed there for the next eleven years.   A 1917 biography of Froeb says:  “By that time the young clerk had fully acquired a thorough knowledge of the various features and details of the business and felt confident of his ability to manage the same class of business on his own account.”

As a result,  in 1883 the Charles Froeb Co., wholesale liquor dealers, first appeared in New York business directories, located in the Williamsburg District of Brooklyn. Meanwhile Charles had married in 1880. His wife was Alma Kirchuebel, two years his junior.  She too was the daughter of German immigrants,  Herman and Augusta Kirchuebel, who also lived in Brooklyn.   The Froebs would have a family of boys,  August born in 1883; Charles Jr., 1886; Frank, 1886, and Herman, 1890.  A fifth son, Robert, died in infancy in 1893.

Success came quickly to Froeb.   During the late 1880’s he engaged a well-known New York architect to build him a mansion in the Bedford Stuyvesant district of Brooklyn. The architect was Theobald Engelhardt, who was a member with Froeb of the Arion Singing Society, a very popular German social organization.   Shown here, the house was constructed at 671 Lafayette Street, between Marcy and Tompkins.  Upon completion the Froebs moved in and Charles and Alma lived there the remainder of their lives.  The house made news in 1904 when a lightning bolt struck it, dislodging one of the spheres at the top of a gable and slinging it against a neighboring brownstone. 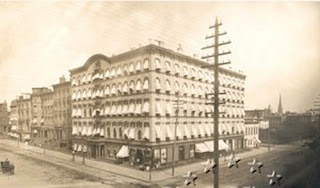 Through the end of the 19th Century and the beginning of the 2Oth, Froeb’s business expanded.  His flagship brand was “Blue Grass Rye” which he sold in ceramic jugs and glass bottles.  He advertised it heavily, emphasizing its medicinal uses, asking “physicians and consumers” to note such qualities as “very digestible,”  “very nourishing,” and “entirely natural.”  One of the 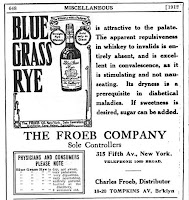 elegant establishments to feature Blue Grass Rye was the historic Everett House off Union Square, shown below. Froeb claimed a distillery in Camp Nelson, Kentucky, but that probably was a supplier relationship not a true ownership.   As seen in an ad here, by 1907 Feoeb had a store at 315 Fifth Avenue in Manhattan as well as his Brooklyn liquor house at 18-20 Tompkins.  Like many of his competitors,  Froeb issued color lithographed signs for saloon customers.  Froeb’s depiction of Daniel Boone stands out. 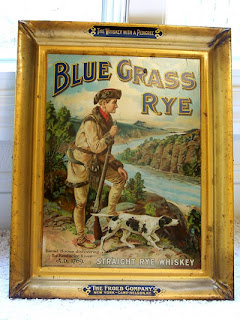 Froeb was interested in German culture, supporting organizations like the Arion Club, of which he was several times president, and other groups that fostered German traditions and language.  In 1913 he was made honorary president of  the Brooklyn Turnverein and the Hanover Club.  He also found time to be active in Democratic Party politics.  In 1908, almost as a surprise  to the press,  Froeb was named a Democratic elector for the 1908 election.  The Democratic candidate was William Jennings Bryan, who lost.  This was ironic since Bryan was opposed to strong drink and the Republican winner, William Howard Taft, was a champion of the whiskey trade.

Over time Froeb prepared his sons to join him in business. August, Charles Junior, and Frank all were sent to the highly acclaimed Brooklyn Polytechnic High School.  As they matriculated they were brought into the company.  Froeb incorporated it in 1914 and renamed it Charles Froeb & Sons.  The three boys were given various clerking duties in the establishment. 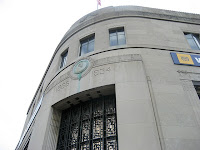 Even as he was preparing a future in the whiskey trade for his sons,  Froeb himself, perhaps anticipating Prohibition, was embarking on an alternative career.  During the early 1900s he became a vice president of the German Savings Bank of Brooklyn.  By 1914 he had achieved the presidency.  This financial establishment merged several times and each time Froeb emerged at the top of the bank management.  He ended up as president of the Lincoln Savings Bank, shown here,  a post he held until retirement.  Meanwhile the original source of his wealth and business prestige had been shut down by the dictates of National Prohibition.

When he died in 1946 at the ripe old age of 89,  Froeb could look back on a career that brought him from a teenage immigrant, speaking only a foreign tongue, to the top of the New York City financial world, living in one of Brooklyn’s most elegant mansions.  The Froeb home now serves as the First Corinthian Baptist Church, another irony given the Baptist view of strong drink.

Posted by Jack Sullivan at 4:53 PM