Sam Grabfelder and a Distillery of His Own 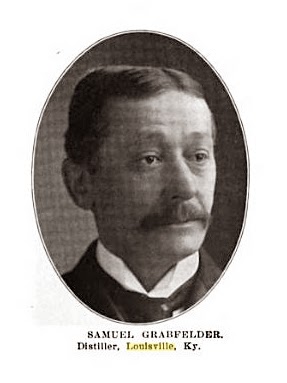 Samuel Gladfelder was a seven year old boy when he was brought as an immigrant  to America.   As he grew up in Kentucky he began a liquor business that was dependent on the whiskey production of others but yearned to own and operate his own distillery.  In 1903 he achieved his goal.

Grabfelder was born in Germany in 1845.  In 1852 his parents left their native Germany  with Samuel and an older brother, Morris, to seek their fortune in the United States,  They ultimately settled in Louisville where, it appears Sam early went to work, probably in the whiskey trade.  At the age of 25 he married a woman named Delia, whose birthplace in census records variously was given as Pennsylvania and Kentucky.  She was 19. 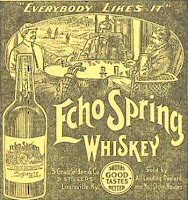 By the time he was 35 he had accumulated sufficient funds to begin his own whiskey business in 1880, located initially at 70 Second Street near Market Street in Louisville, a city that was the hub of the Kentucky distilling industry.  Sam called it  S. Grabfelder & Co.  The firm, whiskey wholesalers and “rectifiers,”  grew rapidly and by 1882 expanded to larger quarters at 228 Second Street.  In 1890 Grabfelder made another major move,  relocating to 131-133 West Main Street, on Louisville’s prestigious “Whiskey Row.” 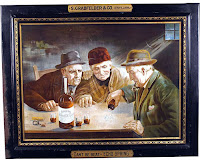 Louisville. Grabfelder may have had some financial stake in those operations but he did not own any of them.  Like many rectifying outfits, he may have suffered from eratic supplies that limited his output and frustrated his expansion. He clearly saw the advantage in owning a distillery.

The opportunity came for him in 1893. In 1880 a sizable distillery had been built in Bullitt County, Kentucky by an unlikely trio: Squire Murphy, a local;  A. M. Barber, a teacher from the East, and Calvin Brown, a whiskey salesman.  After operating for thirteen years under this partnership,  Murphy died and Brown retired.  When Barber offered Sam Grabfelder a contract to handle sales of whiskey from the distillery in 1893, he grabbed at it.  It meant Sam had an assured supply for his rectifying operation.  Within the decade he achieved full ownership of the facility. 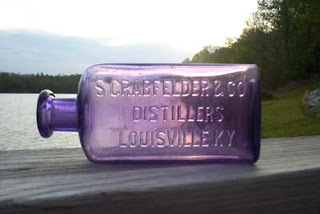 Like many of his Louisville competitors,  Grabfelder provided a rich array of giveaway items to his favored customers,  saloons and other drinking establishments.  As shown here, they included colorful lithographed metal signs for Echo Spring, with a slogan” Can’t Be Beat.” Another Echo Spring motto was “Sounds Good, Tastes Better.”   Grabfelder issued attractive back of the bar bottles and watch fobs for Echo Spring.   Rose Valley Whiskey also got its share of advertising and giveaways.  I particularly like the tip tray with the comely lady fondling a horse.

Prohibition. The Grabfelder Distillery and all but one of its warehouses were razed during Prohibition but the grounds eventually became the site of a Jim Beam distillery.  Sam Grabfelder may not have been at the helm of his company during some or all of these events.  The 1910 U.S. Census found Sam and his wife, Delia, living in Ward 20 of Philadelphia.  Age 65, he proudly gave his occupation as “distiller,”  although the distillery was hundreds of miles away. 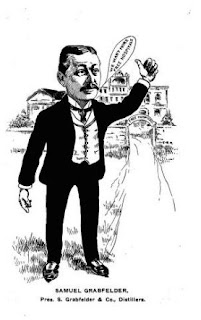 My thought about Grabfelder’s move East -- and this is purely speculation -- is that Delia was originally from Philadelphia and encouraged her husband to move there after he had achieved the pinnacle of success as a whiskey man.  From two states away, Sam continued to manage his whiskey domain until its demise in 1919.  Age 75, Sam showed up in the 1920 Philadelphia census, living with Delia in rented quarters and giving his occupation as “retired.”  In retirement,  I imagine, he often thought about his rise from a poor immigrant boy to the creation of a large and thriving whiskey business, including the crowning glory of owning his own Kentucky distillery.

Posted by Jack Sullivan at 7:25 AM