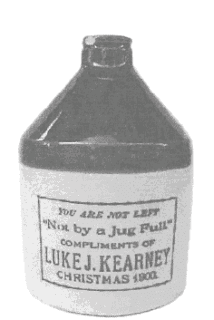 A District of Columbia saloonkeeper, named Luke J.Kearney, was notable for giving away to favored customers at Christmas time small jugs of whiskey.  While other whiskey distributors and tavern keepers sometimes gave customers favors at Christmas and New Years. Kearney’s giveaways are distinctive. Virtually all are two-toned stoneware mini-jugs about 5 and 1/2 inches high. More important, each year had a new slogan -- something for the drinking public to ponder while draining the modest contents of the jug. 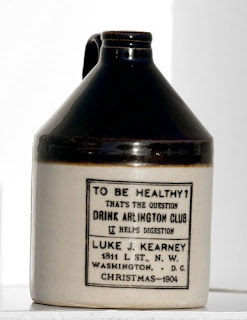 The next year the Washingtonian employed a personal motto: “Well I’ll be Jugged...Here’s Another Jug with Compliments of Luke J. Kearney.”  The 1904 version was “If You Try Me Once, You Will Try Me Again.” . It appears that Luke also issued a second version in 1904.  It contains a verse that says:
“To Be Healthy? That’s the Question; Drink Arlington Club; It Aids Digestion.” 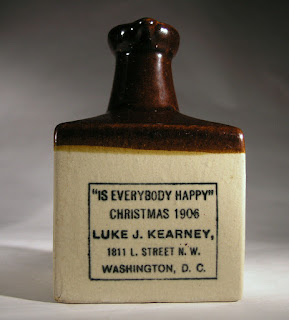 Although I have yet to identify a giveaway for 1905,  Kearney issued two items in 1906.  One bore the enigmatic motto, “As I Go Up the Hill of Prosperity, May I Never Meet a Friend. “  The second 1906 stoneware is a squared jug with the simple question: “Is Everybody 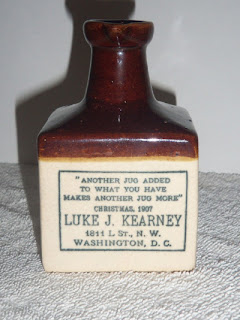 After 1907 the jugs apparently ceased, although Kearney continued to sell whiskey in embossed glass bottles.  He also gave out shot glasses advertising Arlington Club Whiskey,  a brand registered to the Hellman Distilling Co. of St. Louis.  Kearney’s saloon continued to be listed in local business directories until by Act of Congress the District went dry in 1917.

Luke Kearney was the product of an Irish Catholic family whose parents had emigrated to the U.S., before his birth.  His father, also named Luke,   found a job as a watchman in federal service, working for 50 years.  He and his wife, Mary, had a family of six children. Among them was 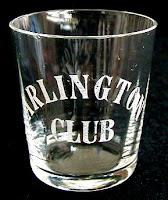 The source and length of Kearney’s education and early business career is shrouded in time, but the 1900 Census found him, age 32, living at 1811 L Street, above his saloon.  He was married to a woman named Catherine with whom he had three children. In 1906, Catherine died,

leaving Luke to raise Mary, 8; Luke Jr., 6, and Frank, 3.  Kearney does not appear to have remarried.  His parents may have helped him with the parenting for a time but his Father died in 1916 and Mother in 1917. 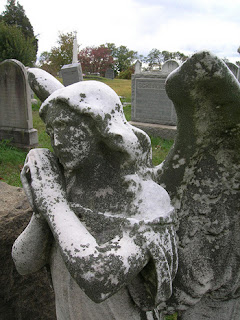 Kearney brushed with celebrity in 1903 when he accepted a check from a customer drawn on the Riggs Bank by Harry K. Thaw.  Thaw was the young socialite who later murdered famous architect Stanford White over the showgirl, Evelyn Nesbit, “The Girl in the Red Velvet Swing.” A sensation of its time, the incident has spawned a number of books and more than one motion picture. Thaw may have been a customer in Luke’s L Street saloon.  In 1915, Kearney also is reported to have owned a baseball club in DC.

Kearney died in 1933, at the age of 65.  He is buried with his wife Catherine, his parents and other family members in Holy Rood Cemetery situated just above Georgetown.  It is a predominantly Irish Catholic graveyard associated with the Jesuit parish of Holy Trinity Church.  Most of the burials took place from the mid 19th century into the early years of the 20th.  Today the cemetery is in very sad repair.   Numerous gravestones have been destroyed or overturned.

Sanborn fire maps of the time show the 1811 L Street saloon as a two story brick building 25 feet wide and extending rearward almost one-half block to an alley. There was an empty lot on the east side, possibly for hitching horses.  Today the address itself has vanished between a large office building at 1801 L St. and a restaurant and bakery at 1819.  The street is shown as it looks today. 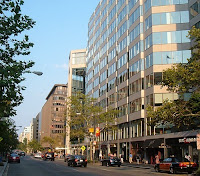 When the Holiday Season comes upon us, we should remember Luke  Kearney, as Charles Dickens would say,  as “a man who knew how to keep Christmas.” and, as appropriate, let’s salute Luke’s memory by taking a nip from a jug of our own.

Posted by Jack Sullivan at 9:20 AM