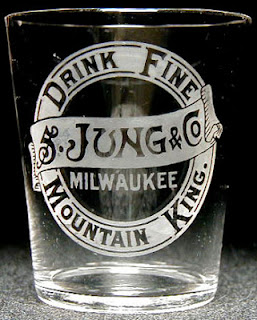 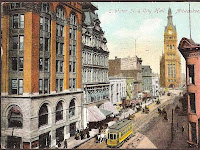 About this time, as well, Simon and Adelheid started their family.  Son Frederick, known as Fred for most of his life,  was born in 1883.   A second son,  Edward, would be born six years later.  After the departure of A. Breslauer from his dealership,  Simon added Michael Weiner as a partner.  In 1897 S. Jung & Company moved from Broadway to three addresses on East Water Street    Shown here in a postcard view circa 1909, Water Street was home to a number of retail and wholesale liquor houses. 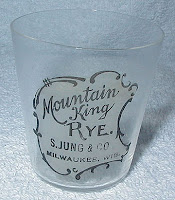 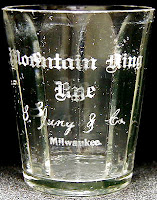 The most elaborate was one of four extant shot glasses advertising Mountain King rye.   Although it is not marked,  this shot glass, shown top right, has been 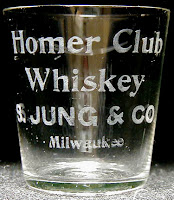 identified by experts as the work of George Troug, an Italian-born artist in glass who found his way to Cumberland, Maryland, and its thriving glass industry.  in 1892 he opened the Maryland Glass Etching Works where he produced the premier images found on many American shot glasses.  Jung, with his passion for shots,  sought out Troug’s artistry 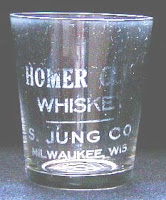 Although the Mountain King glass below it lacks similar elaboration, the fluted sides and gothic letters for the message give it a distinction beyond the ordinary.   Although the last Mountain King shot is plain, the letter was done through a soft etch process and is a thin walled item. The same can be said for the final three Jung-produced shot glasses, two issued for Homer Club Rye and one for Ole Bull Bourbon.  Although they are largely without decoration and feature plain lettering, they were a quality giveaway and prominently advertised his whiskeys.   In short,  Jung consistently gave customers his “best shot.” 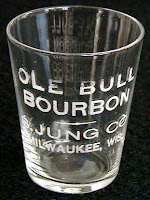 As Prohibition forces slowly strangled the Midwest markets for Jung’s whiskey, his business began to suffer.   Throughout the region, town after town, county after county, went “dry” under local option.  In 1916, with 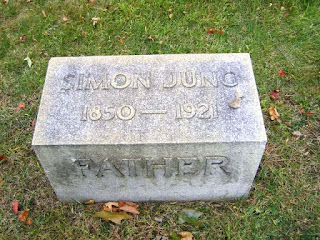 strong backing from
Henry Ford,  Michigan voted a total ban on sales of alcohol.  By 1918, Jung recognized the bleak future and shut the doors of his business.  He never lived to see Repeal.  In 1921 he died at age 71.   He was buried in Milwaukee’s Greenwood Cemetery as his widow, Adelheid, and bachelor sons,  Fred and Edward, stood by his gravesite in the cemetery’s section 3, block 9, lot  6.   They all would join him there eventually, Adelheid in 1931.