Today Waikiki Beach on the Hawaiian Island of Oahu is one of the most popular recreation areas in the world.   A British-born Honolulu saloonkeeper and liquor dealer named Walter Chamberlain (abbreviated to W.C.) Peacock more than a century ago saw the promise in a barren strip of land along the Pacific Ocean.  He built the Moana Hotel at Waikiki, still a landmark, and began a history of development that continues to this day.

Born in in 1858 in Lancaster, England,  Peacock, after a sojourn in New Zealand, arrived in the Territory of Hawaii about 1881.  In 1883 in Hawaii, he married Margaret, a women he had met in New Zealand.  They would have one child, a daughter.
Not long 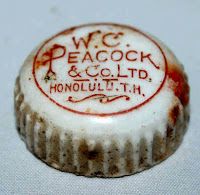 after arriving, Peacock started a wholesale liquor business with a local named George Freeth at 23 Nuuanu Street. By 1890 Freeth had departed and the firm known as W.C. Peacock & Co. Ltd emerged, as shown on a porcelain bottle stopper. 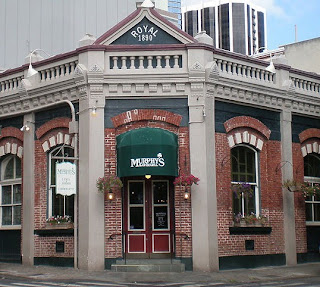 In addition to selling liquor at wholesale, Peacock also ran a string of saloons in Honolulu.  A trade token names three:  Pacific, Cosmopolitan, and Royal.  For the Royal Saloon in 1890 he 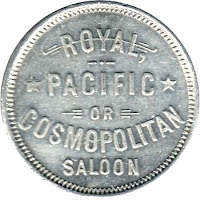 designed and constructed a brick building at the corner of Merchant and Nuuanu Streets in Chinatown.  Peacock was taking advantage of an opportunity that arose when Merchant Street had been widened the previous year.  The building, shown here, was relatively modest by current standards, featuring white stucco pilasters, cornice and balustrade, and a another spot of stucco over the bricks of the upper walls.  The Englishman gave it windows and door bays along the street creating a feeling of spaciousness.  Still a Honolulu landmark, the Royal Building currently is occupied by an Irish pub.

Housed in his own building, Peacock’s liquor empire continued to expand although his customer base was confined to the islands.  He packaged his wines and liquors in glass bottles, both amber and clear.  They are avidly collected in Hawaii today.  He also sold gin in the characteristic “case” shape,

as shown here.  Peacock’s nephew remembered working at the company filling gin bottles.   According to family lore:  “Peacock sold 3 grades of gin increasing in price.  Many bought the most expensive kind. However, in the back room all the gin came out of the same barrel.” 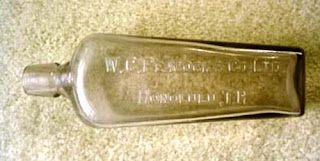 For a short time, W.C. and his brother, Corbert Peacock,  branched out into the farm implement business in Australia.  Directories in Melbourne from 1899 to 1901 record the existence of the W.C. Peacock & Bro. firm on Sturt Street South, making and selling rotary disc plows in a design that the brothers may have invented and on which they held a patent.  Likely financed by W.C., Corbert ran the company for three years and then abruptly returned to Hawaii where he opened a saloon and assisted in his brother's liquor business.

Meanwhile W.C. Peacock was piling up riches from sales of liquor, both from store and saloons.  Like many whiskey men of time he provided bar tokens to retail consumers and shot glasses, some with fancy gold rims, to favored saloon owners and barkeepers. One glass had the seal of Hawaii

lithographed in the base.  Peacock built a mansion for himself on a spit of land on the eastern side of Oahu that looked out on the gently rolling surf of the Pacific.   As the 19th Century drew to a close, he also noted that more or more steamships were docking at Honolulu and the influx of tourists was increasing rapidly.  Moreover, there was a dearth of hotel accommodations at the beach. 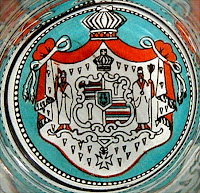 Peacock created a new company, capitalized at $100,000, later increased to $150,000.  He called it the Moana Hotel Company Ltd. and planned a new hotel. For this effort he engaged the well known architect Oliver Trephagen to design it  and hired a local contractor for the construction.  Owning the land on which the hotel was to be built, he arranged for his own house to be moved further back from the beach to accommodate the large building.

A hotel history tells the story:  “The Moana Hotel officially opened on March 11, 1901 ushering a new era of tourism for the islands. Designed in the old colonial style architecture of the period, it had 75 rooms and was the costliest, most elaborate hotel building in the Hawaiian Islands at the time. Each room on the three upper floors had a bathroom and a telephone - innovations for hotels of the times. The hotel also had its own ice plant and electric generators. The first floor had a billiard parlor, saloon, main parlor, library, office and reception area.“Ionic columns supported an elegant port cochere at the entrance leading to a lobby embellished with intricate plaster detailing on the ceiling. The Moana, which means "broad expanse of ocean," lived up to its name with the crowning achievement of a rooftop observatory 120 feet off the ground, lit by more than 300 lamps. It accommodated receptions while offering 360-degree views of Waikiki, Diamond Head and the Pacific Ocean.  The hotel’s first guests in 1901 were a group of 114 Shriners hosted by the local Aloha Temple Shriners. They paid a costly $1.50 per night for their rooms." 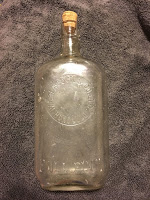 Peacock took a strong interest in many aspects of the Moana.  He is said by family members personally to have planted the giant banyan tree that still spreads over the grounds. Because of the remoteness of Hawaii in those pre-airplane days, the Moana may not have been the immediate profit center Peacock anticipated.  Or he may not have liked the hotel business.  In any case, he sold the property in 1905 to Alexander Young, a prominent Honolulu entrepreneur with other Hawaiian hotel interests.

Subsequently the Moana, with a number of additions over the years, became known as the “Grand Queen” of Honolulu hostelries. It also was the pivotal building that led to the massive development of Waikiki.  My parents stayed at the Moana in the 1950s and I visited regularly from 1970 until just recently.  It remains a marvelous destination after more than a century. 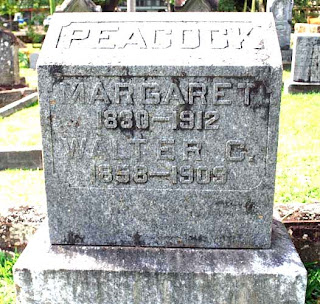 In 1909 Peacock, still young at 51, died.  He was buried in the Oahu Cemetery in a section known as the “Peacock Plot.” His mother, Margaret, age 82, three years later would join him in the grave.  Mother and son are memorialized on a joint headstone.  His wife, Margaret, returned to her native New Zealand after W.C.’s death.

Peacock's nephew took over management of the Peacock liquor interests. His time would be limited by the 1915 passage of territory-wide Prohibition in Hawaii.  The company was terminated as were W.C.'s and Corbet's saloons. In 1916 the Royal Building, which had been the center of Peacock’s empire, was leased to business interests.  Since Repeal the site has returned to being a bar and restaurant.

Although Peacock is gone from the Honolulu scene,  this far-sighted whiskey man is still celebrated for his pioneer work for the Hawaii tourist industry, the development of Waikiki and, above all, the magnificent Moana.  On the postcard view of Waikiki that follows, the Moana hotel is the first building on the left side of Kalakaua Avenue.  Find it and remember W.C. Peacock who made it all possible. 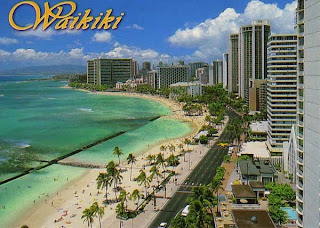 Note:  This is an amended version of the article occasioned by a thoughtful communication from a Peacock relative named Joe Hanke.  Drawing on family knowledge, he made it possible to correct  mistakes in the earlier version and to include additional information on the Peacocks.

Posted by Jack Sullivan at 9:00 AM