Jonas F. Brown, a prominent liquor dealer in Minneapolis, initially disdained the “straight” whiskeys of his day for the blended and compounded brands he mixed up in a back room of his establishment.  When he failed to pay the extra taxes levied on “rectified” whiskey, federal authorities hauled him into court.  Facing ruin, Brown somehow escaped punishment, went straight, and prospered.

Federal laws clearly discriminated against rectifiers like Brown.  Not only were they obliged to pay $1.10 cents per proof gallon of whiskey, a fee levied on all alcoholic spirits, they were subjected to a number of additional taxes.  For example, rectifiers were required to pay the IRS  $200 dollars a years 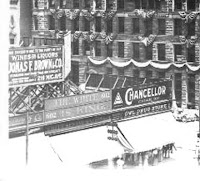 as a special tax on their occupation. This tax covered only the blending process. If a rectifier, not unnaturally, wanted to sell his blended spirits he was compelled to pay still another tax as a wholesale liquor dealer.  That added an additional $100 annually.  In the year ending 1915 the total of these special taxes on rectifiers amounted to a total of $482,988, paid by whiskey men like Brown just for the privilege of blending tax-paid spirits and selling them.

Moreover, attempts constantly were being made to increase taxes on rectifiers by the federal government, often egged on by the straight whiskey producers, particularly those in Kentucky who had a powerful lobby in Washington.  One rationale was that  rectifiers used unhealthy or extraneous ingredients in their liquors.  Obviously some did. An industry spokesman, however, countered before a Congressional committee that:  “Rectified spirits are no more adulterated, unhealthful, or the subject of unfair trade practices than are unrectified distilled spirits.”

Jonas Brown would have agreed with that statement.  His method of protesting was to forego paying the required taxes.  Nothing in his background, however, indicated risky behavior or a rebellious spirit.   He was born near Worchester, Massachusetts, in 1830 into an established Yankee family.  As a young man he worked for the Providence and Worchester Railroad.  He left New England about 1860, reputedly for health reasons, and settled in Minneapolis.   Early in his Minnesota career, Brown entered the liquor trade.  In an ad he identified the beginning date as 1866.  The 1870 U.S. Census found him, now 40 years old and still unmarried, living by himself in a rented room. His occupation was given as “liquor-wholesale.”

Brown established his liquor dealership and saloon at 216 Nicollet Avenue, one of the principal commercial avenues of Minneapolis.  He advertised the location extensively as shown on a Hennepin Avenue billboard.  A 1903 publication of Minneapolis resources and industries described Brown’s establishment as a “palatial resort” and elaborated:  “He is located in a three-story brick building, where he occupies the entire building, with basement for storage, which gives him a combined floor space of 11,000 square feet....The interior is very handsomely fitted with bar and fixtures composed

of black walnut, the shelving behind resplendent with fine large mirrors and cut glass.”

He called his business “Joseph F. Brown & Co., Wines and Liquors.”  Many of those liquors Brown was mixing up in one of the many rooms in his building, merchandising brands of his own he called “Gopher Rye,”  “Blood Port,” and “Finest in America.”  He packaged his goods both in large ceramic jugs and in glass bottles.  His strap sided pints and quarts were embossed with his name,  monogram, and address.  He also issued a decorative flask, probably for the Holiday Season.

It was during the 1870s that Brown had his scrape with federal authorities. After ignoring several warnings from Internal Revenue authorities, in 1875 he was arrested for failing to pay rectifier taxes amounting to $1,200, more than 10 times that in today’s dollar.  It was a highly serious matter.  Had he been found guilty,  the government could have confiscated his stock, levied a stiff fine on top of his tax arrears, and actually sent him to prison.  The case made headlines in Minneapolis newspapers but the ultimate verdict remains unknown.  Brown, it appears, escaped confiscation and doing time. 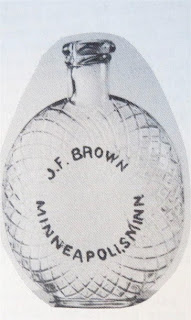 During this same period Brown married a woman named Emma, surname unknown.  Like himself, according to census data,  she was of New England stock, born in Massachusetts as were her parents.  Emma was eleven years younger than Jonas.  They lived in a house at Sixth Street and Fourth Street 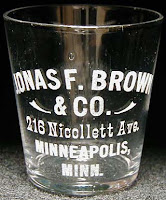 for 40 years.  Although the couple apparently had no children,  the 1880 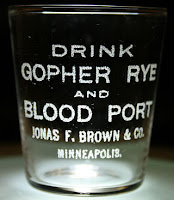 census recorded two men in their early twenties boarding with them.  The occupation of both was listed as “clerk in store,”  probably working for for Jonas F. Brown & Co.

Despite his brush with the law,  Brown subsequently established himself as a respected businessman and solid citizen.   One tribute made during his lifetime said:  “Mr. Jonas F. Brown...has always been prominent in any movement inaugurated for the welfare and betterment of the city.”  Jonas also was serving up not only his own blends (and presumably paying the requisite taxes),  but also purveying some of the leading brands of Kentucky and Pennsylvania “straight” whiskeys,  including “Old Crow,” “Old Taylor Bourbon,” “Old Monogram Rye,” and “Golden Wedding Rye.”  Like other Twin Cities whiskey men,  Brown issued advertising shot glasses to favored customers.  Into his 70s he continued to guide the fortunes of the firm he had founded. 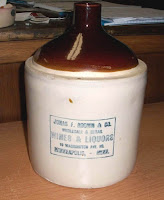 In February 1908,  Jonas Brown died in Los Angeles, California, where he may have gone to escape the harsh Minnesota winter.  He was 78 years old.  His widow, Emma, would follow him to the grave in September of the same year.  The firm, however, survived for seven more years.  The new management kept same name but moved in 1909 to a different 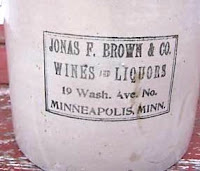 location at 19 Washington Avenue, North.   As shown here, the company maintained Brown’s emphasis on bottling their whiskey in ceramic jugs.

Jonas Brown’s 1908 obituary in the Minneapolis Journal declared him one of the city’s most widely known men.   It testified to his standing as a business owner, calling him:  “...The last survivor of the old school of liquor dealers.  In the days when card and wine rooms, slot machines, music and free lunches were recognized as adjunct of the saloon,  Mr. Brown continued himself strictly to the business of selling liquor as an ordinary commercial proposition.”

It would appear from this account that the young rebel who had dared flaunt the IRS on paying his taxes, as he aged had become a somewhat conservative Minneapolis businessman.  The final judgment of history might well be that Jonas Brown had rectified himself personally and gone straight.

Note:  Much of the information for this vignette was derived from Ron Feldhaus and his 1987 publication,  “The Bottles, Breweriana and Advertising Jugs of Minnesota, 1850-1920.”  It has become a classic for bottle collectors.