The pre-Prohibition whiskey dealers of Toledo, Ohio, were no slouches when it came to producing shot glasses advertising their brands.  Of them all, Louis Haas was the most prolific in the number and variety of glasses he issued as giveaways to favored customers.   He deserved the title: “Toledo’s Sultan of Shots.”

According to census data, Haas was born in Germany in 1853 and immigrated to the United States in 1872 when he was about 19.   His early life in America is obscure but not long after arriving he settled in Toledo,  which at the time had a thriving German Jewish community.   One of the established local whiskey merchants,  Jacob Landman, who ran a liquor dealership on Toledo’s Summit Street,  took Haas into his firm and taught him the business.  By the late 1880s,  Haas had been raised to a managerial position and his name appeared with Landman and his son, Isaac, in city directories.

The 1900 census found Haas,  a young bachelor,  living at 136 Fourteen Street. He was boarding with a man named Max Schohl and his wife.  Schohl, like Haas,  had emigrated from Germany and was 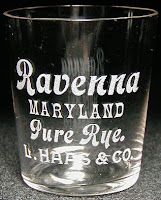 listed in the census as a “travel agent.”   Although Charles Landman was 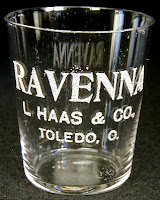 by now quite elderly,  it must have been clear to Haas that his son, Isaac, would inherit the business.  Obviously an ambitious man,  Haas saved his money and in 1895 left the Landman firm to begin his own, competing wine & liquor enterprise.  He called it  L. Haas & Company and located it initially at 128 Summit but quickly moved it to a more permanent location at 402 Monroe Street.  Max Schohl went to work for him.

Perhaps taking a leaf from the Landmans, who issued multiple shot glasses, Haas during the 20 years he was in business in Toledo issued glasses for virtually every one of his house brands.   “Ravenna” was prime among them.  Whether he selected the name from the ancient city in Italy or the much newer municipality in Portage County, Ohio, is unclear.  One 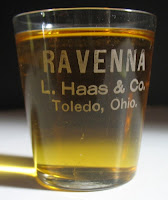 Ravenna shot glass emphasized that the label was a “Maryland Rye.”  Because Haas was a “rectifier,”  that is, compounding and blending various whiskeys and other ingredients on his Monroe Street premises,  it is questionable how much Maryland product actually was involved.

For example, in 1898 the Ohio State Department of Agriculture cited Haas for selling whiskey that was “under proof,” that is, containing less alcohol than claimed on the label.  The state also alleged that testing showed a residue of added sugar,  also considered adulteration.  For 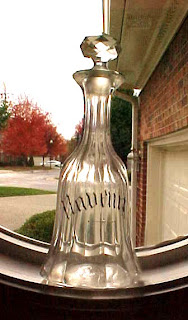 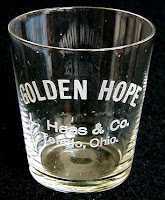 Another shot glass Haas issued advertised his “Conqueror” brand.  It bore an unusual trademark that appears to be a kangaroo with a face more like a mule than an Australian marsupial.   The reference here may be to the frequent image of the kangaroo as a boxer and thus, by

inference, a conqueror.   Haas’ Golden Hope brand whiskey occasioned another glass, this one without a pictorial.

Like other whiskey dealers,  L. Haas & Co. also featured a bitters product, a potion that almost always contained a high level of alcohol.  In his case,  Haas may have been revealing his political leanings in naming it “Der Wahre Jacob” Bitters.”  Taken literally,  the German translated into English means “The True Jacob Bitters”  but it also refers to a radical satirical magazine that first had been published in Germany in the 1880s by the Social Democrat Party.  Often a target of press censorship, in 1933 the magazine and the political party would be suppressed by the Nazi 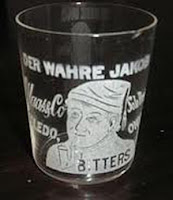 Government.  It would appear that Haas was expressing his support for the Social Democrats in Germany by naming his bitters as he did.  He also issued a dose-sized glass for Der Wahre Jacob Bitters.

With the coming of statewide Prohibition to Ohio in 1916,  L. Haas & Co. was forced to shut its doors.   At that point Louis Haas slipped into the mists of history.  He failed to be recorded in any subsequent U.S. censuses or other Toledo references.   For myself, I prefer to remember him who left behind an interesting series of shot glasses as Toledo’s Sultan of Shots.