Sam Levin Could Clothe, Shelter and Slake a Thirst

In a career that spanned 33 years Samuel Levin was, by turns,  a leading haberdasher,  the manager of three hotels, and the owner of  establishments that provided whiskey over the bar and over the counter.  If your clothes were in rags or you needed a room or were looking for strong drink in Trenton, New Jersey,  Sam would oblige.

Levin was born in Russia in 1873, the fifth child of Bernard and Celia Wein Levin.  He came to the United States during his mid-teens, about 1887 or 1888,  apparently along with other members of his family.  Naturalized in 1895, a year later he married married Mary Lidsky, herself born in Russia.  The 1900 census found the Levins living at 325 North Broad Street  in Trenton with Samuel’s father, one of his brothers and their first son, Louis.  Later two other sons, Joshua and Max, would join the family.

By 1900, Levin had already engaged in his first enterprise.  The family’s Broad street residence was an apartment above his clothing store. Called “Gent’s Furnisher,” it was a joint venture between Samuel and a younger brother, Isadore, who would remain almost exclusively in the clothing business for most of his life.  Not Sam.  By 1904 he was managing a hotel  called Princeton Junction House.  Like most hostelries of the time, this one almost certainly featured a saloon.

It may have been there that Levin hatched the idea of becoming a liquor merchant,  With another brother, Harris, who previously had worked as a butcher, he opened a wholesale wine and liquor dealership at 475-459 South Broad Street.   Before long Sam added an outlet at 167-169 South

Broad.  Two liquor jugs from that period carry that address.  The location

was also that of a second hotel that Samuel  managed, called the Star Hotel.  Trenton city directories of 1910 list him as the “proprietor” of that establishment.   For a time he made the hotel the family residence. Sam and Celia’s fourth and final son, Henry, would be born at that location.

It is unclear from records but likely that Levin had a ownership share in the Star Hotel.  He continued in its management until 1912 when he once again returned to 457-459 South Broad to work with Harris selling wholesale liquor. During this period he may also have opened a store in New York City.  A seltzer bottle with that address bearing his name is shown here. Once more, however,

the hotel business beckoned.  Trenton’s National Hotel, once a premier hotel, had been the subject of litigation, experienced a parade of owners, and had fallen on hard times.  About 1915 Levin bought it.  He added rooms, doubling its size   He also appears to have installed his own saloon in the building, again with brother Harris in the picture.  By now Sam had sufficient wealth to install his family in a regular home, locating them on Trenton’s residential State Street.

The coming of National Prohibition changed everything.  The Levins’ wholesale liquor outlets and their saloon came to an end.  Samuel never skipped a beat.  By now a man of substantial wealth, he successively became an investor in the Stacy Building & Loan Association,  the Treasure Trenton Laundry, and M&S Retail Clothes.  Now grown to maturity,  both Joshua and Max joined him in these businesses, Joshua in the laundry trade and Max in haberdashery.   A final Levin enterprise was the Eton Boys Clothing Store. 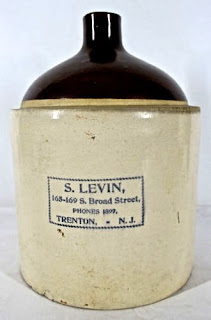 Brother Harris did not make the transition out of liquor quite so gracefully.  After Prohibition he moved to operating a cafe and a grocery store.  In 1932 he was found to be running a saloon and was raided and a quantity of whiskey, wine and beer was seized.  He was fined $250 and placed on probation.  Afterward Harris went into the real estate business.  While his brother’s problems obviously were a concern for Samuel, he continued his entrepreneurial ways until his death in 1938.

With his grieving family standing by his gravesite, he was interred in the consecrated Jewish section of Greenwood Cemetery in Hamilton Township, New Jersey.  A plinth bearing  the Star of Davis marks the Levin family plots and a simple headstone, with a Masonic symbol,  lies over Samuel’s grave.   Among the mourners was his son Henry, shown here, who became one of Hollywood’s best known and most prolific film directors,  responsible for some 50 motion

pictures, including such favorites as “Where the Boys Are” and “Journey to the Center of the Earth.”

Although the entrepreneurial career of Samuel Levin ended in 1938, he can still be remembered for the energy and enterprise he brought to selling clothing, shelter and  whiskey to the citizenry.  Way before the term had currency, Sam had demonstrated “multi-tasking” to the people of Trenton, New Jersey.

Note:  Much of the information contained here was gleaned from a family website that tracked the various occupations of Sam Levin.