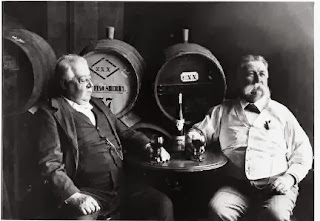 Gemuetlichkeit, a German word best expressed in English as “a friendly good time,” was the goal of Milwaukee’s myriad beer gardens, taverns, sample rooms and saloons in the 19th and early 20th Century.   Herman Toser,  a immigrant from Germany, understood the concept thoroughly and brought it to a wine cellar that bore his name.

A photo from the establishment shows a routund gentleman at left contemplating a wine glass.  Herman F. Toser is sitting with a friend testing the flavor of sherry drawn from a barrel behind them.  They are seated in a establishment appropriately called Herman Toser’s Weinstube.  Established in 1872 it was a highly popular place for the business and professional men of Milwaukee to gather, especially those of German ancestry. Located on Milwaukee’s East Side at the corner of Mason and Water Streets, as shown here, it was accessed by walking off the street to a downward staircase and into a cellar filled with dozens of wine barrels. 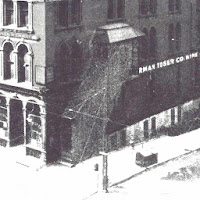 Upon arrival the thirsty customer was surrounded by steins, tapestries and other cultural artifacts of the Old Country.  The main attraction in Toser’s Weinstube was a huge hand-carved sign that hanged over the manager’s station.  Carved out of three pieces of oak, the plaque, shown here, originally was used to cover a cask holding 36 gallons of wine.  The carving depicted four men, two 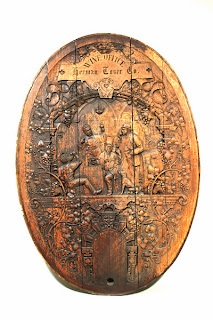 standing, one sitting and one slumped onto the floor, all drinking freely amidst a bas relief of vines, leaves and grapes.  A dog is sitting on the floor silently and patiently observing the intoxicating effects. An inscription at the top says:  “Wine Office, Herman Toser.”

There was no bar in the cellar, only a series of tables and chairs for visitors to sit and enjoy the fine wines Herman imported from Germany, as well as hearty sandwiches of ham and corned beef served on thick slices of rye bread.  All around, groups of customers chatted or played cards, possibly “Sheepshead,”  a form of bridge brought from the Fatherland.  When the cask cover, furniture, steins and other relics were donated in 1858 to the Milwaukee Historical Society, the organization’s historian expressed great enthusiasm for the place.  He proclaimed that Toser’s Weinstube had provided “Gemuetlichkeit  in its truest form.”

Toser was born in Germany in1833 but at an early age emigrated in1854 from his homeland to the United States, settling in Milwaukee with its large German population.  There, at the age of 21,Toser married a woman of about the same age, also an immigrant from Germany whom he may have known back home.  Her name, as given in census records, was Phellippina, affectionately known as “Phene.”  The 1860 Census found the couple living in Milwaukee with three children, Elizabeth, age 6;  Lena, age 4; and Herman, still an infant.  Toser’s occupation was given as “merchant.” 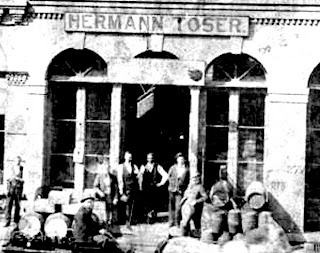 That same year Herman launched another spirits-related enterprise.  It was a wholesale and retail liquor dealership, with attached saloon.  There he sold various types of  liquors and wines, both imported and domestic.  For the first five years Toser had a partner in this company, known as Toser & Arend.  It was located at 424-426 East Water Street not far from the Milwaukee River that runs through the city’s  downtown.  By 1871, Arend had left the organization and Toser,  apparently needing larger quarters, had moved to 275 East Water,  his address for the next eight years.  Over the life of his firm he would move twice more, both times within the 400 block of East Water, an avenue that boasted a number of liquor dealers.

A late 1800s photo shown here captures the activity outside the ground floor of Toser’s three story store and office building.  The front door is surrounded by liquor barrels, both full and empty, while a drayman rides off to deliver whisky to saloons all over Milwaukee.  The loungers in the doorway may be employees or gents just heading in to buy a jug or bottle or to order one from the bartender inside.  A Milwaukee journalist later described the experience of entering Herman Toser’s Wines and

Liquors.  Once inside, he said, the thirsty customer reached the bar “by a long walk between hogsheads of whiskey and wine.”  Toser also was advertising vigorously.  A stock trade card showed a winsome Spanish or Italian lass balancing a large jardoniere of wine on her shoulder.   In an age when California had yet to discover good wine, Toser emphasized European imported vintages.

Toser also was selling some of the best brands of whiskey from Kentucky and other sources.  Shown here is a fancy jug with gold lettering in which he 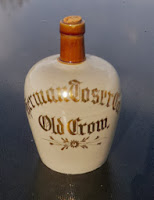 was merchandising “Old Crow,” at that time a premier brand.  In addition to selling good whiskey, he and his employees were busy mixing up their own liquor on the upper floors of his building.  Toser was a “rectifier,” that is, someone blending and compounding whiskey to achieve a distinctive taste.  Then the spirits were bottled and a proprietary label 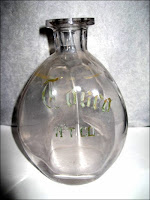 slapped on them and sold as house brands.  Among Toser’s offerings were   "Old Abe Rye,” "Old Waveland,”  "Tosco Club,” and “Pelican.”  The last was the only brand for which the Toser Co. bothered to obtain a trademark,  registering the name in 1907.

Because Herman’s had lived through the American Civil War,  it would be natural to assume that he named Old Abe Rye after the martyred President, Abraham Lincoln.  Not so. The brand name referred to an American bald eagle named for Lincoln.  The bird, known as “Old Abe” was tamed by the 8th Wisconsin Infantry during the conflict.  This aggressive raptor accompanied the troops into action and was reputed to have attacked Confederates from the air.  Twice wounded and reviled by the Johnny Rebs as “that damnedYankee buzzard,”  Old Abe survived the war and died of old age in Wisconsin in 1881.  With an eagle depicted on the label, Toser was taking advantage of the bird’s fame in marketing his whiskey. 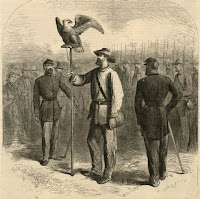 In addition to his whiskey brands, Toser also was mixing and merchandising his own brand of bitters, a  highly alcoholic potion that also claimed to have medicinal values.  He called it “Monopole Bitters.” Shown here is a decanter embossed on the back with the name.  It is a very rare bottle today with reputedly only a couple of known examples.  Made by the glass house of William Frank & Sons of Pittsburg, whose mark it bears, this graceful, deep red decanter was, by my reckoning, a back-of-the-bar bottle,  given to special saloon customers.    Most bartenders stocked at least one brand of bitters for those drinkers who who were “feeling poorly” and needed a remedy.

Toser could fix you up sacramentally as well as medicinally. he advertised heavily in a Roman Catholic publications, selling altar wines. He had enlisted the assistance of a Benedictine abbot named Nepomucene Jaeger to help plug the product.  The prelate, from St. Prokopius Abbey near Chicago,  was quoted from a letter he purportedly spontaneously wrote the company. Abbot Nepomucene enthused: For a pure wine, which has not been treated but has ‘made itself’ I heartily recommend yours,”

With the success of his enterprises and growing wealth, Toser found time for recreation. A local newspaper reported in1888 that he and his wife and a daughter had embarked on an ship for Europe.  One assumes he visited his German homeland and arranged for wine shipments.  The 1900 U.S. Census found Toser, age 67, living with his wife at 220 Eleventh Street, just west of Milwaukee’s downtown  His occupation was given as “wholesale merchant - wine.”

As his son, Herman, came to maturity, he was taken into the business and gradually assumed more of the management chores.  In 1907 Toser died at the age of 74.  Surrounded by family and friends, he was buried in Section 33 of Forest Home Cemetery, an expansive graveyard on the southern edge of Milwaukee.  The company he had founded continued to 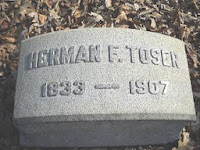 operate, apparently under his son’s management, until 1918 when it was shut down, apparently by the forces of Prohibition.  By 1922, the young Herman Toser was listed in business directories as a distributor of truck tires.

Given the number of instances in which both contemporary and subsquent scribes have waxed nostalgic over the joys and comforts of Toser’s Wine Cellar, it must have been an extraordinary “watering hole” in a town full of good ones.  Throughout its existence under the watchful eye of its owner,  his establishment had been a gathering place not only for the leaders of the German community, but many other business and professional men of Milwaukee.  For 37 years Herman Toser had proved, indeed, that he could provide “Gemuetlichkeit” in its truest form.

Posted by Jack Sullivan at 7:09 AM