Frank Fettic and “The Oldest Thirst Parlor in Nevada” 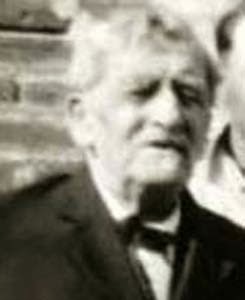 Why a Canadian youth of German immigrant parents would choose to settle in one of the most remote hamlets in America and buy a saloon remains unknown.  That is exactly what Frank Fettic did when in 1884 he bought a Genoa bar, a drinking establishment that became known as “The Oldest Thirst Parlor in Nevada.”

Even in the latter part of the 1800s,  Genoa (pronounced “ge-no-a) defined the meaning of a frontier town.  Located not far from the California border and Lake Tahoe, the community  was founded in 1850 as a trading post on the Emigrant Trail to California.  Mormon pilgrims found it a convenient stopping place and called it “Mormon Station.”  The original Mormon settlers left in 1857 when they were recalled by Brigham Young to Utah to join the conflict there with non-Morman settlers.  Shortly after, the town was renamed “Genoa” possibly a local joke since the dryland location was so unlike the Italian city.  A  sketch by H.V.A. von Beckh during a U.S. military expedition through the region shows a scattering of wooden buildings nestled along the east side of the Sierra Nevada mountains. 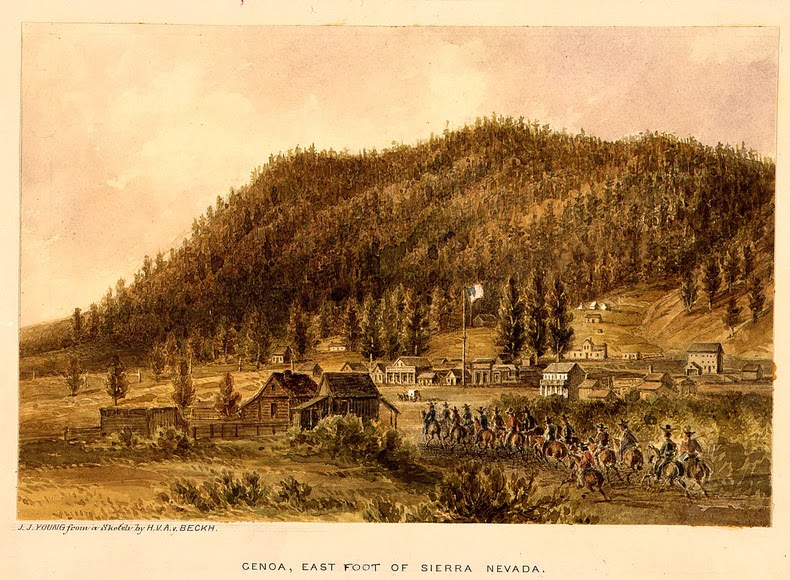 Despite its remote location,  Genoa was home to Nevada’s first hotel,  court, and newspaper.  In another first the town was the location of the state’s first saloon, the one Fettic bought.  The initial owner was Al Livingston who constructed his “thirst parlor” building of brick and called it 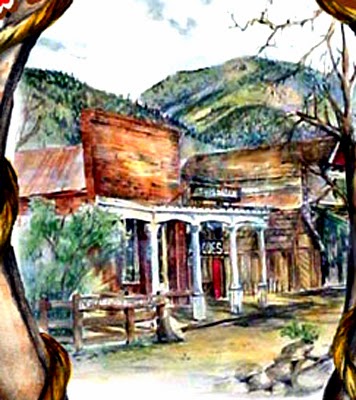 “Livingston’s Exchange.”  As the only place to get a drink of alcohol for miles around,  Livingston’s saloon, shown here in an artist’s sketch, did a healthy business.  Notice the hitching post out front.

Meanwhile Frank Fettic, shown above, was growing to maturity.  He had been born circa 1846 (census data differs) to parents who had come to North America from Germany.  At the age of 15 he left Canada in 1963 for the United States,  eventually finding his way to Nevada and Genoa.   There in 1884, he bought Livingston’s place and changed its name to “Fettic’s Exchange.”  Now a mature 38 years old, Fettic apparently had achieved considerable experience in running a drinking establishment.  Announcing that his was a “gentleman’s saloon” he is said to have allowed no drunkenness or fighting.   His establishment, Fettic declared in an ad, was “kept in first-class style in every particular way, serving fine wines, liquors, and cigars.” In another forum he emphasized that he “would be pleased to have all my old friends call, and they would be treated in a most cordial manner.”

Fettic’s saloon was classy.  Its bar featured a mirror that came to be named “The Diamond Dust Mirror,”  because of reputed bits of diamond dust that had been imbedded in the glass.  The mirror had been manufactured in Glasgow, Scotland, and shipped around Cape Horn to San Francisco.  Subsequently it was brought across the mountains by covered wagon to Genoa.  The ceiling of the place featured fancy medallions and red oil lamps that eventually were converted to electricity.  Frank’s place definitely was a cut above the usual Western saloon

As one of the few watering holes in the region,  Fettic’s Exchange proved very popular.  Legend had it that two American presidents,  Ulysses S. Grant and Theodore Roosevelt stopped there for libations during travels through the West,  Grant in 1879 and Roosevelt in 1903.  Both reputed Genoa stops, according to a Nevada newsman, were spurious.  Although as an ex-president Grant with wife and son visited Nevada at the end of a world tour,  following a speech in Reno,the party boarded a special train bound for Omaha, Nebraska, and then headed back to the Grant home in Galena, Illinois. They never got near Genoa.  Roosevelt visited a number of Western towns during his Presidential tour and his itinerary took him closer to Genoa, but no evidence exists that he stopped there and visited Fettic’s saloon.

An American celebrity who probably did drop in on Fettic’s place was Samuel Clemens,  better known as Mark Twain, who adopted that “nom de plume” while a reporter for the “Territorial Enterprise,” a newspaper that originally was founded in Genoa but later moved down the road to Virginia City, a boom town with more population and more potential.  A careful review of Twain’s writing likely would reveal a visit to Genoa and as a man who like his drink, a stop at Fettic’s Exchange.

Meanwhile its owner was having a personal life.  In 1880 Frank had married Cerissa,  a woman about 16 years his junior.   Over ensuing years they would go on to have six children,  four boys and two girls.   Fettic continued to operate his saloon for at least a quarter century.   He shows up in the 1900 and 1910 U.S. census forms with his occupation listed as “saloon keeper.”  That latter year Fettic’s Exchange had a close call when flames tore through Genoa, destroying the original fort, station and hotel.  Although the famed Diamond Mirror had to be evacuated from the building,  his structure survived the fire. 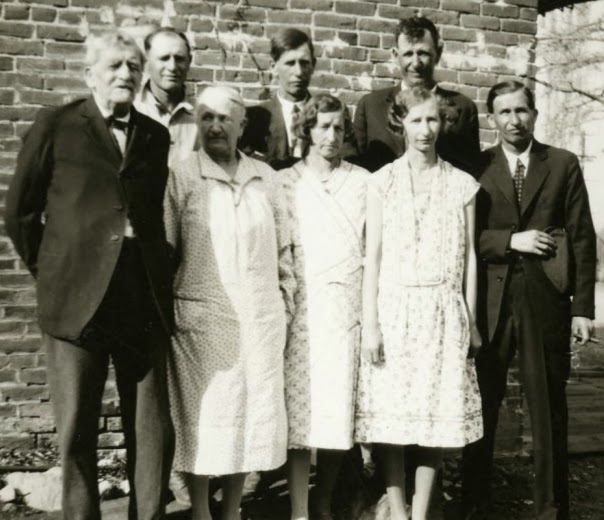 As he aged,  Frank counted on assistance from other family members to help in the bar.  A photo from 1929 shows him at 81 standing with Cerissa and their grown children in Genoa.   The senior Fettic

would live another four years, dying in 1933.  He was buried in the Genoa Cemetery, shown here, in the shadow of the mountains in which he had lived for so long.   By that time saloon had been closed by National Prohibition

As shown on a plaque,  the original building survived and subsequently has had a series of owners, the most recent of whom has called the revived drinking establishment “The Old Genoa Bar.”   Since the end of Prohibition a number of film stars making movies in Genoa or in the vicinity have “bellied up” to Fettic’s old bar.  They reputedly include Clark Gable, Carole Lombard, Clint Eastwood and Walter Mathau.  John Wayne is said to have rented the Genoa Bar for three days while 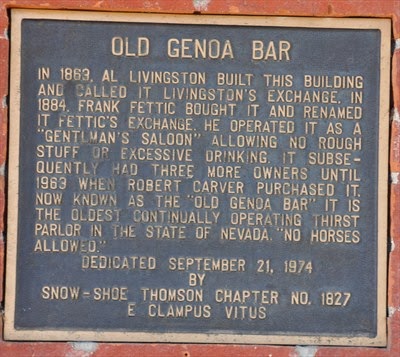 filming his movie, “The Shootist.”  Subsequently the establishment featured a 16-ounce John Wayne Bloody Mary with such ingredients as bacon-infused vodka, bacon salt on the rim of the glass, and peperoncini. 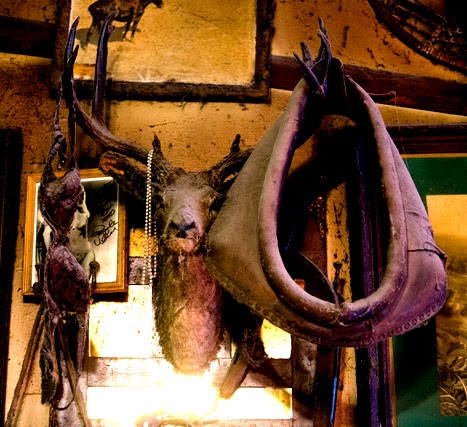 Perhaps the most famous artifact to be left behind in the saloon occurred in the 1960s.  Here is the story as it is told in Genoa lore: “...Raquel Welch visited the bar and noticed the hundreds of bras hanging from the ceiling and asked the bartender why they were on display. The bartender told Welch the bras had been left by patrons over the years. After Welch had a few drinks, the bartender politely asked Welch if she would leave her bra hanging from the ceiling. 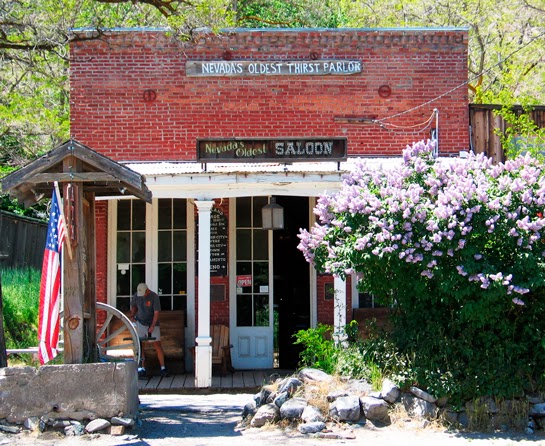 The catch, Welch demanded, was all the other bras had to be taken down so that only her bra could be displayed in the bar forever. The bartender agreed.”   Shown here, the bra  is left of the elk’s head.

More than a century and a half after its founding,  this Nevada saloon, shown as it looks today, is still serving drinks to customers and reveling in its reputation as Nevada’s “oldest thirst parlor.”  Frank Fettic as he lies in the burying ground just outside of town surely must be proud. 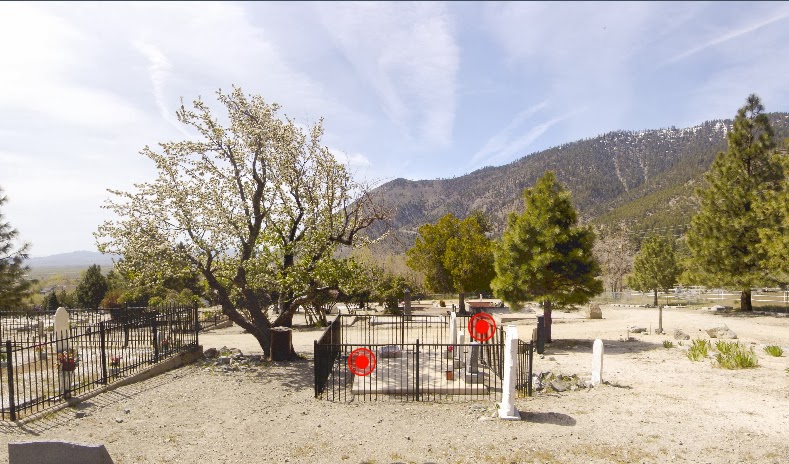 Posted by Jack Sullivan at 2:00 PM