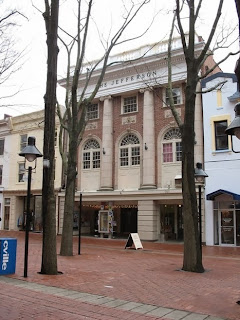 Steeped in the liquor trade,  members of the Aronhime family found themselves locked in combat with Virginia’s prohibition forces for years during the early part of the 20th Century, winning an important battle in 1909 but losing the war just seven years later.

The Aronhime whiskey men were three.  Father Samuel was born in Germany in 1836.  He emigrated to the United States in 1855 at the age of 19, and eventually settled in Charlottesville, Virginia.  He married Hannah, 20 year his junior, in 1880 and sired three sons, Gordon, Morris and Percy.  Samuel was a saloon keeper, running a Charlottesville drinking establishment and billiards parlor on Main Street at the corner of Market.  He also was the proprietor of the classy-sounding “The Opera Bar,”  located beneath the Jefferson Auditorium in the 600 block of West Main.  Shown here, it was the focus of Charlottesville theater scene   Samuel advertised his “up-to-date” service and claimed mixed drinks to be a specialty.  The father’s ads also emphasized “family trade solicited.”

The Senior Aronhime also was providing opportunities for his sons to join him in the liquor business.  The 1900 census found the family living together in Charlottesville.  The father’s occupation was given as “merchant.”  Son Gordon, still just 18, was already working, his occupation “salesman,” likely for his father.  Morris, 16 years old at the time, soon would be inducted into the whiskey trade.  Charlottesville business directories of that period listed the Aronhime Bros. liquor dealership.

Eventually Gordon and Morris, probably financed by their father,  headed to Roanoke, Virginia, and established a distillery there about 1907. Their  leaving Charlottesville may have been prompted by increasing pressure from pro-Prohibition forces.  The Virginia WCTU was founded in Richmond

in 1882 but had developed a chapter in Charlottesville by the very next year.   Roanoke by contrast was more of a “boom town” and a hotbed of liquor dealers who sold whiskey by rail express into totally “dry” North Carolina and other non-alcoholic localities.

A 1908 Roanoke business directory listed the brothers’ operation as the Aronhime Distillery Company, located on Tinker Creek Road.  The facility was noted in government revenue logs as Registered Distillery #275, Tax District #6.  Shown here is a mini-jug from the company with that name and federal distillery designation.   The brothers received a charter from the State of Virginia in 1909 for their distillery and also opened the Aronhime Liquor Company at 127 Salem Avenue.  Shown here, the street was a major Roanoke commercial area. 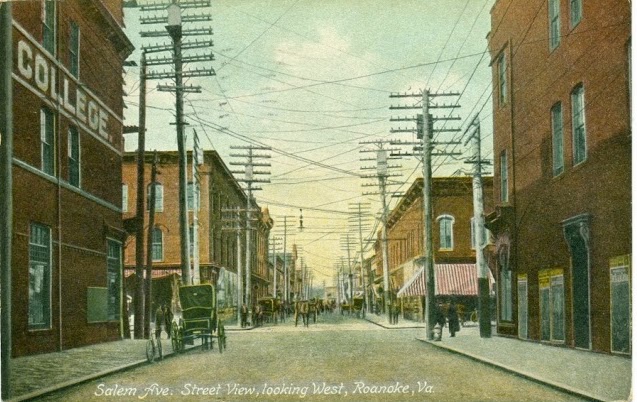 It is startling to understand that the brothers both were still in their 20’s when they began operations in Roanoke, although they may have posed as being older.  In the 1910 U.S. Census Morris’ age was given as 35 when in reality he was only 26.  He had been married about three years to Sara, a Kentucky-born woman, and they were boarding with another family.  Early in their marriage the couple would deal with grief as when a daughter died shortly after birth. The occupation listed for

Morris by the 1910 census was “liquor merchant.” 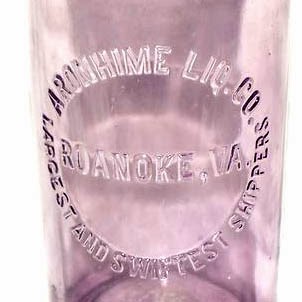 The Aronhimes issued their whiskey in embossed quart bottles, shown here, as well as in larger containers.  They also sold a line of California fruit brandies under the “Old Abbey” label.  Like many of their competitors they issued shot glasses to saloons and other favored customers that advertised their  “Flying A” brand.  Their advertising emphasized that they were a “Mail Order Liquor House” and suggested that the railroad express companies operating from Roanoke “make us next door neighbors.”

The brothers were finding, however, that sometimes neighbors could rejected being “next door” to liquor.  The year was 1909 when four far western Virginia towns -- Radford, Marion, Saltville, and Glade Springs -- officially went “dry” under local option laws operative in Virginia. Alcoholic beverages were strictly forbidden to be sold within their city limits.  Violations meant stiff fines.  The Southern Express Company, the carrier of choice, refused to deliver booze from Roanoke to the four towns, apparently fearing arrest of its agents.  This did not sit well with Roanoke’s whiskey merchants,  particularly those who were heavily involved in the mail order trade.  Although much of their whiskey went to North Carolina where prohibition was statewide, Virginia consumers also were important.

Although usually business competitors, the Roanoke whiskey men joined forces to do battle with the four towns.  The Aronhimes were lead plaintiffs, spearheading the battle against the four dry 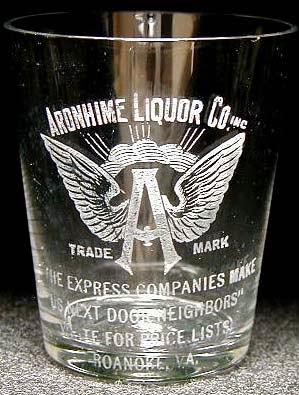 communities.   They took their case to the Virginia Corporation 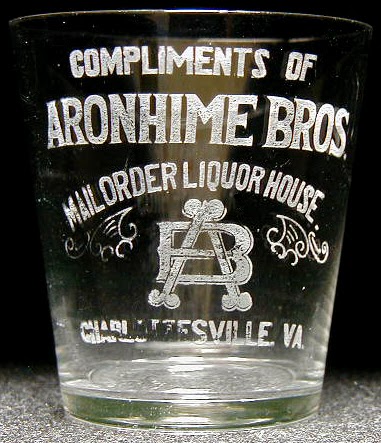 Commission, a body clearly sympathetic to their cause.  After hear arguments from both sides, that body handed victory to the Aronhimes and their Roanoke colleagues.  The Commission declared the four ordinances void.  It also ruled that the whiskey merchants could sell liquor up to five gallons at a time to customers in any of the towns. Furthermore, the Commission required Southern Express to deliver the goods to consignees.

After their victory over the Western Virginia communities, the Aronhimes flourished for several years with their mail order trade.  Their price list book, available from the company by mail, ran to 31 numbered pages within stiff covers.  Their inventory covered a wide variety of whiskeys and other liquor items to be shipped into those otherwise non-alcoholic areas.  During this period Gordon Aronhime married.  His wife’s name was Fedora and they would have two boys,  Charles born in 1910 and Samuel (after his Grandfather) born in 1912.

In 1913, however,  the U.S. Congress by law curbed the mail order traffic of liquor into dry localities.  As Prohibition forces grew ever stronger and markets for whiskey continued to close, the brothers may have anticipated further curtailment.  About 1914 they sold their distillery to Charles H. Martin who promptly changed its name to the Martin Distilling Co., Inc.  In 1916 the entire state of Virginia voted statewide Prohibition. The Aronhimes continued to operate their Roanoke liquor dealership until the very end.

Although the brothers now were completely out of the whiskey trade, they were still young men, had proven business abilities, and one assumes had amassed sufficient capital to enter into other enterprises.  In 1917 the brothers announced the creation of the Aronhime Packing Company located in Bristol, Virginia, on the border of Tennessee.  Morris was president and Gordon secretary-treasurer.  With capitalization recorded at $50,000 (15 times that in today’s dollar), they announced the opening of an new slaughterhouse with a capacity to handle 30 cattle and 250 hogs daily.

The meat packing business apparently did not go well for them, however, and after about three years the Aronhimes either sold out or went bankrupt.  In any case, the 1920 census found Morris Aronhime residing in Louisville with wife Sara.  His occupation was given as “advertising salesman.”  Gordon was living in Bristol with his wife Fedora and their two 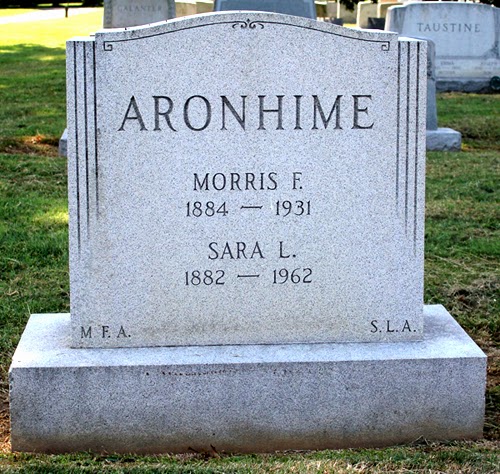 sons. His occupation was listed in the census as the owner/proprietor of a automobile parking company.

The subsequent activities of the Aronhime brothers, living apart and out of the liquor trade, are shrouded in time.  Both of them spent the rest of their lives in the towns where they settled after Roanoke.

Morris died first at age 47 in 1931. He is buried in the Temple Cemetery in Jefferson County, Kentucky.   Gordon followed in 1950, age 68, and was buried in Bristol’s Glenwood Cemetery.  The Aronhimes had fought the good fight for whiskey in Virginia and won an important battle but, in the end, lost the war.